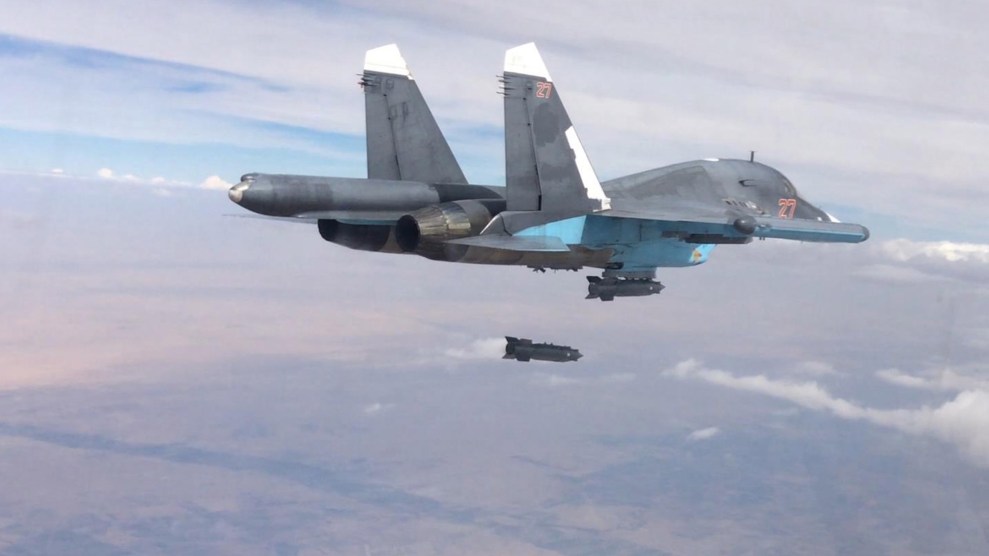 Russia resumed airstrikes in Syria on Tuesday in a major new effort to break resistance in rebel-held areas of Aleppo.

“Today we started a large-scale operation to deliver massive fire on the positions of the Islamic State and Jabhat al-Nusra in the provinces of Idlib and Homs,” Russian Defense Minister Sergei Shoigu said on Tuesday. Shoigu did not mention strikes in Aleppo province, where the London-based Syrian Observatory for Human Rights said that warplanes bombed a hospital in the town of Awejel.

The strikes came one day after Russian President Vladimir Putin spoke with President-elect Donald Trump by telephone. Trump said during the presidential campaign that he wanted to focus on defeating ISIS rather than removing Syrian President Bashar al-Assad, and he backed closer cooperation with Russia, which claims that it is leading the international fight against jihadi groups with its air campaign. Shoigu said on Tuesday that Putin and Trump discussed the war in Syria and the possibility of “uniting efforts in the fight with the common enemy number one—international terrorism and extremism.”

Trump spokeswoman Hope Hicks did not immediately respond to a request for comment from Mother Jones.

Even as Russia claims that its airstrikes primarily target ISIS and other terrorist groups, statistics from conflict monitoring groups say that Russian bombs have mostly killed civilians and anti-regime rebels rather than jihadi fighters. Around 10,000 Syrians have been killed by Russian airstrikes since the air campaign began last September, according to the Syrian Observatory for Human Rights, including nearly 4,000 civilians. Russian aircraft also routinely strike hospitals and other medical facilities in rebel-held areas, and the United States believes Russian bombs destroyed a UN aid convoy in Syria in September.

The strikes were the first to hit Aleppo since October 18, when Russia agreed to a humanitarian halt to the bombings, but the resumption of airstrikes was expected for several weeks. Russia recently moved the Admiral Kuznetsov, its sole aircraft carrier, from northeastern Russia to the Mediterranean to participate in the strikes. Secretary of State John Kerry warned last month that Aleppo could be “bombed into smithereens” without a new and more stable ceasefire in the city.