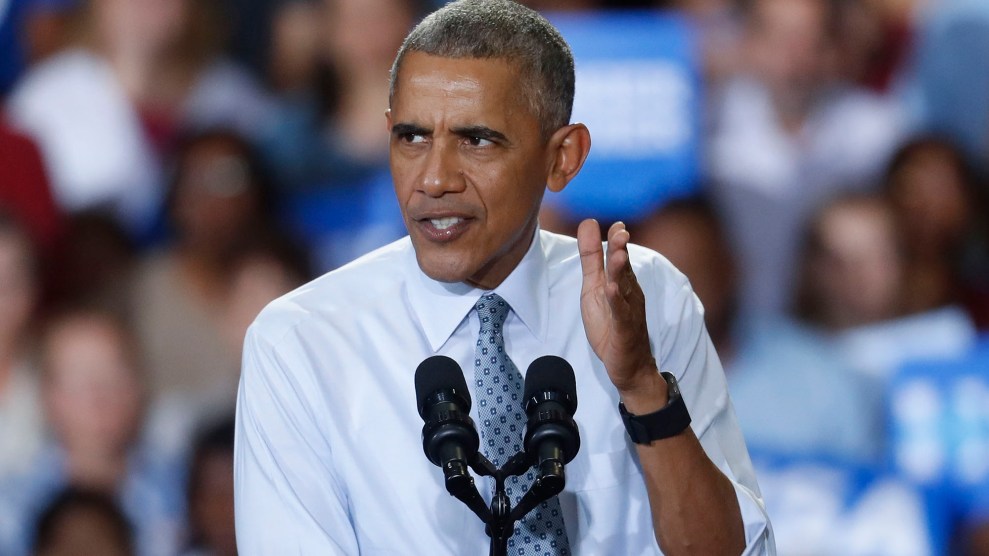 President Barack Obama posed a tough question to the men attending his speech in Columbus, Ohio, on Tuesday night: Is sexism stopping you from supporting Hillary Clinton for president?

It’s clear from his comments that the president believes that a suspicion of ambitious women is hampering Clinton. “You know, there’s a reason why we haven’t had a woman president before, and I think sometimes we’re kind of trying to get over the hump,” Obama said. “I want every man out there who’s voting to kind of look inside yourself and ask yourself: If you’re having problems with this stuff, how much of it is, you know, that we’re not just used to it?”

Obama continued, “When a guy’s ambitious and out in the public arena and working hard, well that’s okay. But when a woman suddenly does it, suddenly you’re all like, ‘Well, why’s she doing that?’ I’m just being honest. I want you to think about it because she is so much better qualified than the other guy. She has conducted herself so much better in public life than the other guy. This notion that somehow it’s hard to choose, it shouldn’t be.”

Clinton and her campaign have shied away from suggesting that people are voting against her because she’s a woman. But Obama appears to be making the case for her. In an interview on comedian Samantha Bee’s show Full Frontal earlier this week, he suggested that people would try to discredit Clinton, if she becomes president, with sexist tropes about women: “She’s tired. She’s moody. She’s being emotional.”

“When men are ambitious, it’s just taken for granted,” he told Bee. “‘Well, of course they should be ambitious.’ When women are ambitious: ‘Why?’ That theme, I think, will continue throughout her presidency, and it’s contributed to this notion that somehow she is hiding something.”

Sam interviews @POTUS in the Wicked Wing of the West. #SamanthaBee pic.twitter.com/1nCnJj0iVg