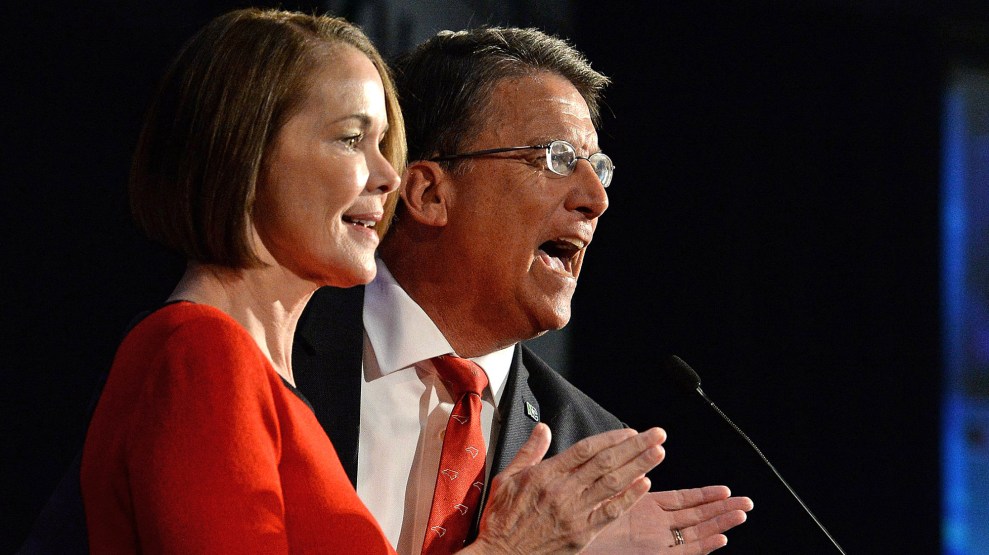 It’s been nearly two weeks since Election Day and North Carolina voters still aren’t sure who their governor will be. Roy Cooper, the state’s current Democratic attorney general, has 6,871 more votes than Gov. Pat McCrory, according to the state’s election results Monday afternoon. But the incumbent governor is refusing to concede the election, claiming voter fraud and election irregularities.

McCrory’s candidacy might have been sunk by his signing of the controversial HB2 “bathroom bill,” which required transgender people to use the public bathroom corresponding to their biological sex. The measure ended up costing millions in lost revenue from sports and entertainment events and businesses that withdrew from the state. North Carolina was also a major battleground in the voting rights war, with major fights over strict voter ID laws, reduced access to polling places, and heavily gerrymandered districts.

McCrory has turned those concerns about voting rights into a centerpiece of his challenge, claiming that voter fraud occurred in as many as 52 of the state’s 100 counties, according to Raleigh’s News & Observer. McCrory has alleged that ineligible felons cast ballots, that handwriting similarities suggest some people voted more than once, and that votes were cast by dead people.

“Why is Roy Cooper so insistent on circumventing the electoral process and counting the votes of dead people and felons?” McCrory campaign spokesman Ricky Diaz said in a statement posted to the campaign website Monday. “It may be because he needs those fraudulent votes to count in order to win. Instead of insulting North Carolina voters, we intend to let the process work as it should to ensure that every legal vote is counted properly.”

But even Republican-led county election boards were not sold on the legitimacy of his concerns and rejected his calls for a recount. If each outstanding ballot were challenged, says Marc Elias, a lawyer for Cooper, the total number would not give the governor a victory.

“There is nothing that Gov. McCrory or his legal team are to be able to do, to undo what is just basic math,” Elias told reporters Friday, according to the New York Times.

Allison Riggs, a lawyer for the Southern Coalition for Social Justice, told the Times that the challenges were “silly, small in number, poorly researched and often defamatory,” and that some could easily be debunked with even the barest of internet research.

McCrory’s ultimate goal might not have been to overtake Cooper in raw vote totals but, as Mark Joseph Stern suggested in a recent article about the controversy in Slate, “to delegitimize the results to such an extent that the state legislature—which holds a Republican supermajority—can step in and select him as the winner.” A state law allows the Legislature to determine the winner when a “contest arises out of the general election,” Stern writes, and when that contest concerns the “conduct or results of the election.” The law also prevents the Legislature’s decision from being reviewed by a judge, so the Legislature could “step in, assert that McCrory received ‘the highest number’ of legitimate votes, and ‘declare [him] to be elected.'”

Stern adds that the Republicans in the state Legislature have also floated an idea of adding two state Supreme Court justices to the bench, after Republican Chief Justice Bob Edmunds was defeated on Election Day, giving liberals a 4-3 advantage on the court. If McCrory appointed two new justices during the lame-duck session, that would swing the state’s highest court back toward the conservatives.

Richard Hasen, an expert in election law at the University of California-Irvine, says both McCrory’s challenges and the state Legislature’s possible court-packing shouldn’t be dismissed as mere speculation.

“There’s certainly a risk that that could happen,” Hasen says. “I think there’s a question as to whether or not they’re going to try, both in the governor’s race and in the state’s Supreme Court, to overturn what appears to be the people’s votes.”

The North Carolina State Board of Elections will meet Tuesday morning to set guidelines for the county-level boards to handle McCrory’s remaining complaints, according to the Charlotte Observer.