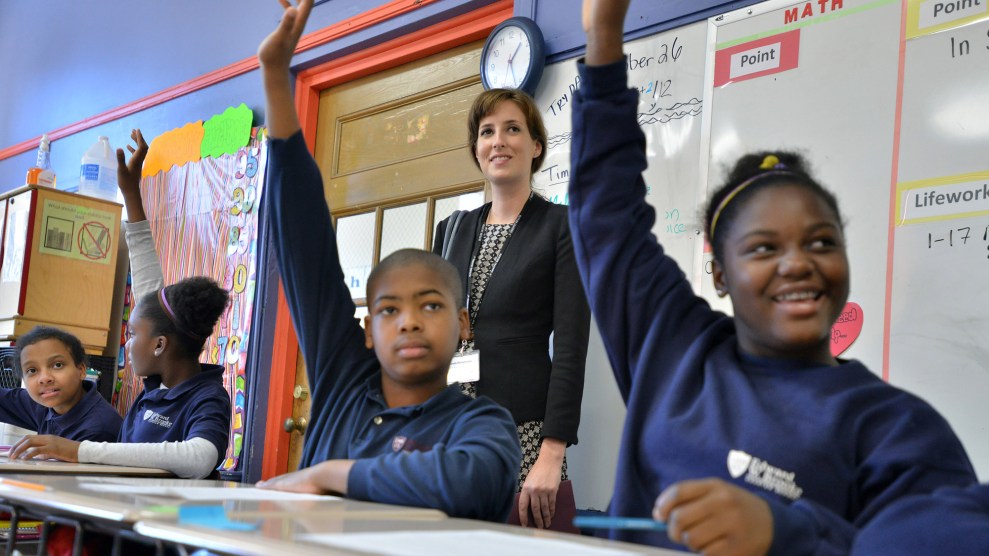 Update, 11:10 p.m.: Massachusetts voters have blocked an effort to approve up to 12 new charter schools a year. The Yes on 2 campaign issued a statement conceding at 10:15 p.m. EST, with 56 percent of precincts reporting. Gov. Charlie Baker said in a statement that he was proud of the effort to “provide more education choices for students stuck in struggling districts.” “While Question 2 was not successful,” he added, “the importance of that goal is unchanged.”

Massachusetts’ public school system is widely considered to be the best in the country. Its high test scores and minuscule dropout rates are the envy of the nation. But thanks to a hotly contested ballot initiative, the state has become the latest battleground in the nationwide push for charter schools.

Supporters argue that privately run, publicly financed charters would offer more choices to students in underperforming school districts. A Brookings Institution study released in September showed that children who attend charters in Massachusetts’ urban areas, particularly those from disadvantaged groups and with special needs, saw improvements in test scores. Kids who attended Boston’s charters were also more likely to take an AP exam and to attend a four-year college than those in traditional public schools.

“If the voters reject more urban charters here, then it’s not clear what more the charter movement can do to convince opponents and skeptics.”

Critics, however, argue that charters can draw money away from traditional public schools, lack oversight, and underserve students with special needs. MIT professor Parag Pathak told the New York Times that the decision “will send shock waves throughout the United States,” regardless of the outcome. “If the voters reject more urban charters here, then it’s not clear what more the charter movement can do to convince opponents and skeptics,” he told the Times.

The initiative has drawn significant financial investment from interest groups in Massachusetts—and beyond. Both sides have combined to spend more than $34 million, more than any other ballot initiative in the state’s history. Supporters ranging from former New York City Mayor Michael Bloomberg and the Walton family heirs have invested more than $24 million. Opponents, including state and national teachers unions, have pitched in some $14 million.

Support for the measure generally has fallen along party lines: Republican Gov. Charlie Baker has called the measure a “social justice” issue that would expand choice for children, while Sen. Elizabeth Warren, who has supported school vouchers in the past, told the Boston Globe in September she would vote against Question 2.

“I am very concerned about what this specific proposal means for hundreds of thousands of children across our Commonwealth, especially those living in districts with tight budgets where every dime matters,” Warren said. “Education is about creating opportunity for all our children, not about leaving many behind.”