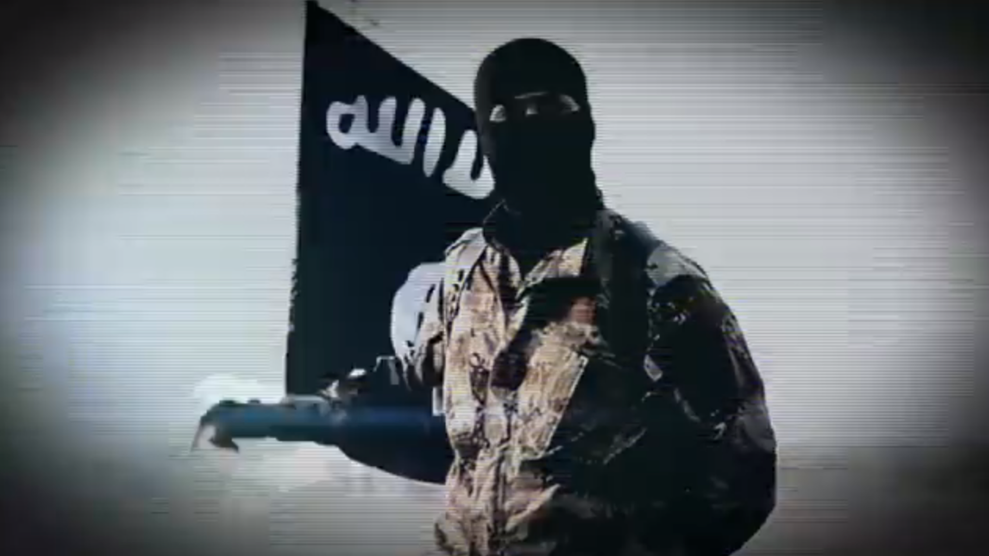 From the presidential debates to obscure local elections, Islamophobic rhetoric has permeated this campaign season. Sadly, anti-Muslim statements appear to resonate with a broad chunk of the electorate. Nearly half of voters say they favor Donald Trump’s proposed ban on Muslim immigrants and refugees. More than 70 percent of North Carolina Republicans say they oppose letting a Muslim be president. Not surprisingly, fear of all things Muslim—from ISIS to Syrian refugees—has crept into this year’s campaign ads and materials. Here are seven of the most striking examples:

Kansas: In October, the Kansas Republican Party sent out an ominous mailer posing the question “Have you met the new neighbors?” In the background is a hazy country landscape punctuated by an ISIS flag. In one corner is a sinister figure clutching an assault rifle, his face covered with a keffiyeh. The flier states, “The first step to keeping Kansas safe is to recognize who the enemy is…LET’S KEEP TERRORISTS OUT OF KANSAS!” The mailer was distributed two weeks after three white militiamen were arrested for plotting to bomb Somali refugees.

Wondering why violence against American Muslims is rising? These GOP mailers, going out in Kansas, offer a clue. https://t.co/IP7aMzOI0Q pic.twitter.com/E2YZoZDuiu

Tennessee: In July, during the Republican primary, state Senate candidate Ron McDow sent out a mailer accusing incumbent Steve Dickerson of welcoming “potentially dangerous Syrian refugees.” The mailer featured an ISIS flag hanging in front of a suburban home alongside the tagline, “Does Steve Dickerson want ISIS living next door to your family?” On the back was an image of a doormat with the word “Welcome” in Arabic-style letters. Dickerson was the only Republican in the state Senate who didn’t sign a letter urging Gov. Bill Haslam to ban more Syrian refugees from being placed in Tennessee. Dickerson won the Republican primary with 60 percent of the vote.

Staff consensus is that this ISIS “Welcome” mat is not proper Arabic https://t.co/uzrs1fjld4 pic.twitter.com/bv99j2IARk

New Hampshire: In October, a group backing Sen. Kelly Ayotte distributed campaign fliers attacking her opponent, Democratic Gov. Maggie Hassan, for being soft on terrorism. The ad warns that “radical Islamic terrorists are knocking at our door” and that Hassan “could put our families at risk.” One Nation, a dark-money group with ties to Karl Rove, defended its ad as an accurate statement of Hassan’s positions. Hassan was part of the first wave of governors who called on the federal government to halt the resettlement of Syrian refugees last year.

Minnesota: In August, Republican congressional candidate Stewart Mills released an ad declaring that his opponent, Democratic Rep. Rick Nolan, is “weak and dangerous” when it comes to terrorism. Amid dark images of ISIS flags and masked men riding in Humvees, the clip’s narrator proclaims, “ISIS wants to infiltrate America, and they’re using Syrians to do it.”

Florida: In October, an anonymous letter was distributed to voters in Temple Terrace, Florida, about Wael Odeh, a Muslim American who is running for city council. Without citing any evidence, the letter raised questions about whether Odeh has ties to extremists and suggested that electing him could mean “a foot in the door for Sharia Law’s subtle influence in our community.” Odeh told the Tampa Bay Times, “If it was directed at me personally it would not be an issue, but this thing is hitting the more than 40,000 Muslims living in the Tampa Bay area. It is absurd. Not every Muslim is radical. We are human beings.”

Alabama: In April, Sen. Richard Shelby ran a campaign ad touting his opposition to resettling Syrian refugees in the United States. The ad promised that Shelby would “eliminate every dime of funding for the President’s refugee scheme” and said that President Barack Obama must be “either asleep or out of touch to even think about bringing 10,000 Syrian refugees to America.”

North Carolina: In November, Gov. Pat McCrory posted a call for donations on his campaign site featuring a plain, dark graphic with the words “NO SYRIAN REFUGEES IN NC” written in red. To the right of the graphic was the governor’s appeal: “In this difficult time, we must think first of our own security and do what’s right to protect North Carolina families.”

While politicians have sought to exploit their constituents’ fears of Islamic infiltration, Muslim advocates have been fighting back with their own ad campaigns. In New York, a human rights group has launched a social-media campaign to combat anti-Muslim bigotry. Former Secretary of State Madeleine Alright has appeared with Rep. Tammy Duckworth (D-Ill.) to defend Syrian refugees. And the Council on American-Islamic Relations launched a satirical ad for a gum that miraculously cures Islamophobia.