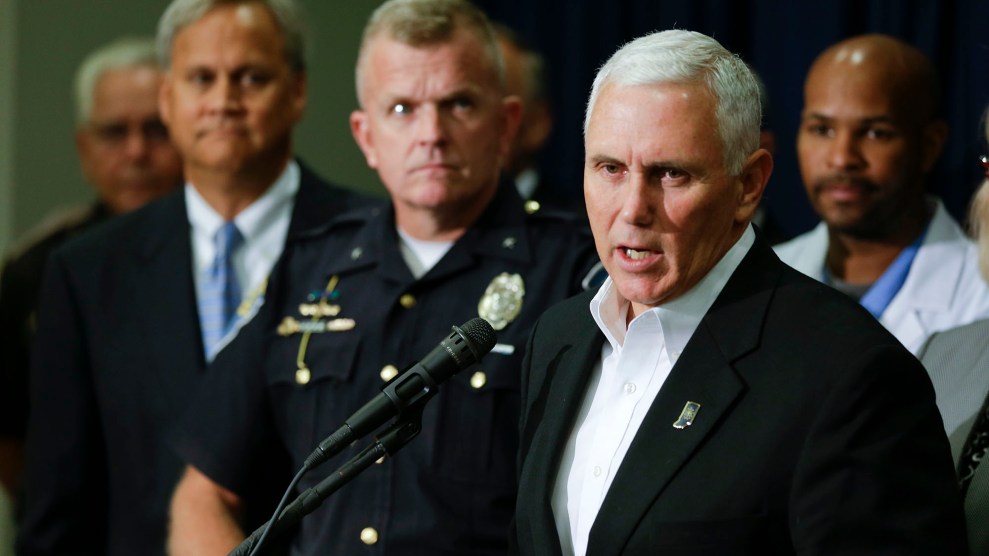 On October 4, Indiana state police raided the headquarters of the Indiana Voter Registration Project, a group that was registering tens of thousands of African Americans to vote. Claiming evidence of fraud and forgery, the police shut down the group’s work a week before the state’s registration deadline. The raid and ongoing investigation have cast a shadow over the state’s elections, police, and top Republican officials—and control of the US Senate could hang in the balance.

Indiana is not a swing state in the presidential election, but the close Senate contest between Republican Todd Young and Democrat Evan Bayh could determine which party controls the Senate for the next two years. The state is also in the midst of a pitched battle for the governor’s seat, which is being vacated by Donald Trump’s running mate, Mike Pence. The importance of these races has intensified questions about the conduct of the state’s election authorities and police. Why, critics ask, is the state launching an investigation weeks before a major election, without sharing proof that fraud has taken place?

“We don’t want people raising these claims right before elections,” says Luis Fuentes-Rohwer, an election law expert at Indiana University Bloomington Maurer School of Law. “Unless you have hard evidence.”

To Fuentes-Rohwer, the situation in Indiana is alarmingly similar to the controversy surrounding the FBI’s involvement in the presidential election. Last Friday, FBI director James Comey announced new evidence in the probe into Hillary Clinton’s use of a private email server, less than two weeks before the election and without any information about that evidence or proof of wrongdoing. The Trump campaign is now running an attack ad based on Comey’s announcement.

“This dovetails nicely with the national election, unfortunately,” Fuentes-Rohwer says. “You bear responsibility as a public official to be more careful than not, and here they are failing in ways that happen to align with their partisan preferences. And that’s unfortunate, because that’s not the way the system is supposed to work.”

A spokesman for the Indiana state police, David Bursten, says there is no protocol dictating that the police lay low as an election approaches. “We really can’t control when people conduct criminal acts,” he says, “and I think people would be concerned if we based our decision to investigate based on political events.” He adds, “Our investigation is not a political investigation. It’s based on the alleged violation of Indiana law.”

Bursten declined to comment on the investigation itself, after a local Indiana prosecutor last month asked the police to stop commenting on the case. A spokeswoman for the Indiana secretary of state did not respond to a question on protocols for commenting on investigations close to an election. But Pence, Indiana’s top Republican official, touted the investigation at a campaign stop in Iowa last month, saying, “I’ll tell you, in the state of Indiana right now, we’ve got a pretty vigorous investigation into voter fraud going on.”

The Indiana Voter Registration Project was launched in April by a liberal group called Patriot Majority USA, with the aim of registering voters, particularly African Americans. Under state law, the group is required to turn every registration form it collects over to the local county election boards. But in September, the Republican secretary of state, Connie Lawson, warned local election officials that the group was up to no good. “Nefarious actors are operating here in Indiana,” she wrote in a letter. “A group by the name of the Indiana Voter Registration Project has forged voter registrations.”

Some registration forms were referred to the state police, leading to a warrant and the October raid. The investigation quickly expanded from nine to 56 counties across the state.

It’s unclear exactly what evidence of fraud or forgery Lawson’s office had found. Bursten said in a statement in mid-October that “we have uncovered intentional acts of fraud by representatives of Patriot Majority USA.” He backed up that claim with the following vague information: “The possible fraudulent or false information is a combination of made up names and made up addresses, real names with made up or incorrect addresses and false dates of births with real names as well as combinations of all these examples.”

Patriot Majority USA believes these discrepancies are not evidence of a widespread fraud scheme, but rather the result of comparing new information from voters with outdated information on the voter rolls. The group commissioned a data analysis firm, TargetSmart, to perform an assessment of Indiana’s voter rolls. The company found more than 800,000 instances where addresses on the voter file did not match current US Postal Service records. For example, according to Bill Buck, a spokesman for Patriot Majority USA, the analysis found many examples of middle names being recorded variously as an initial, as a full name, or not at all. “We were turning in up-to-date data and it didn’t match their old, flawed data,” he says.

Buck claims that the state is clamping down on an effort to register black voters, not voter fraud. “Somebody somewhere figured out that there was a very successful African American voter registration project going on in the state,” he said. “Somebody decided they wanted this to cease.”

Even if the group had submitted a few forged registration forms, it’s hard to imagine that it would have had any impact on the election—or merited the fraud alarm bells that Republicans have set off across Indiana. That’s because the incidence of in-person voter fraud is virtually nonexistent. Moreover, Indiana has a strict voter ID law, so submitting false registration forms wouldn’t accomplish anything without false identification to go with them. As a state senator, Lawson, the secretary of state, championed the law requiring a photo ID to vote.

“If I were to steal an election, I would not do it this way,” Fuentes-Rohwer says. “So the presumption is against the state, because this doesn’t make sense right off the bat.”