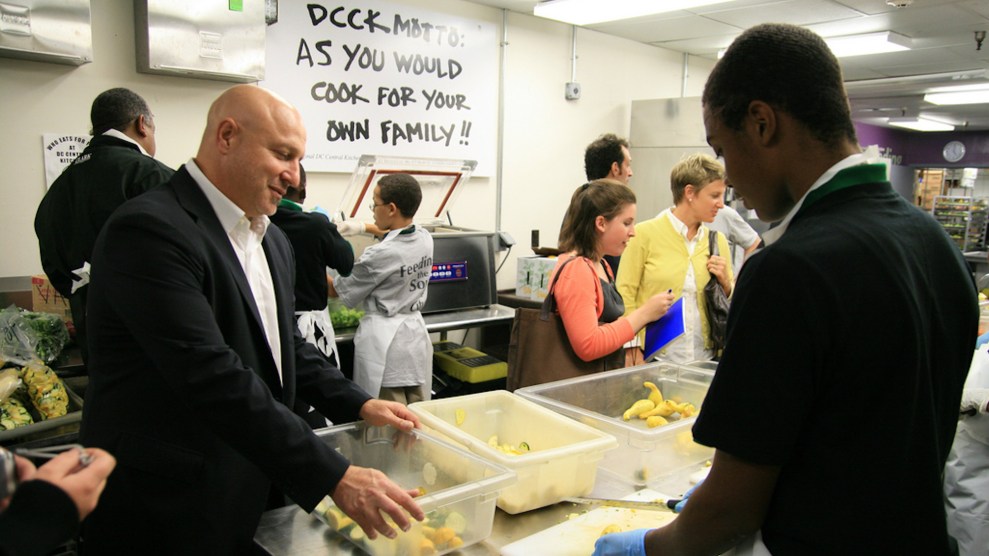 Tom Colicchio, left, is best known for his fancy restaurants and role on Top Chef. But he's also an anti-hunger activist—here he is at DC Central Kitchen, which provides food, skills training, and jobs to low-income Washingtonians. <a href="https://www.flickr.com/photos/dccentralkitchen/3993798712">DC Central Kitchen</a>/Flickr

For about a decade, Tom Colicchio has been best known for the affable but no-nonsense figure he cuts as a judge on the hit Emmy-winning reality TV show Top Chef. He also runs a restaurant empire that spans Los Angeles, Las Vegas, and Miami Beach, centered on his landmark Manhattan restaurant Craft, renowned for its devotion to top-quality ingredients and mastery of technique.

But this bona fide celebrity chef is also a true soldier in food policy fights. Back in 2012, he co-founded Food Policy Action, a group that pushes for more worker-friendly and environmentally friendly national food policy. And this year, he helped launch Plate of the Union, an effort to “amplify the voice of millions of Americans who care about food and farm issues” during the presidential election. To get a grip on the concept of President Donald Trump and what it might mean for our plates, I interviewed Colicchio for Bite podcast.

I asked him about Trump’s vow to expel millions of Mexican immigrants, the lifeblood of restaurant kitchens and farm fields. Colicchio said the GOP’s take on immigration is essentially cynical—the party is beholden to business interests, including big restaurant chains, that rely on migrant labor. But it also balks at giving the workers who feed the nation a path to citizenship, for fear that they’ll end up voting for Democrats.

With his bucket of KFC on his private plane, Trump was sending a message, Colicchio argues: “‘The cultural elites are making fun of your fried chicken and your fast food, and I’m embracing it; I’m one of you.'”

“That really is what all this [Trump’s anti-immigrant rhetoric] is about,” he said. “Farmers in this country, they need immigrant labor, they rely on it,” he said. “I believe when Trump takes a look at immigration and who needs it, he’s going to change his tune very quickly.”

He also took a poke at the the National Restaurant Association, the trade group that represents Colicchio’s own industry, for lobbying to keep the minimum wage low, and name-checked ROC United, a group that advocates higher pay and better conditions for restaurant workers. (We interviewed ROC’s executive director, the excellent Saru Jayaraman, for Bite back in April.)

Colicchio spoke of the need to broaden the movement to reform the food system to be less elitist and more inclusive. He argued that the iconic photo of Trump digging into KFC with a knife and fork on his private jet was a conscious effort to exploit this elite reputation. Trump was sending a message, Colicchio argues: “This is okay—the cultural elites are making fun of your fried chicken and your fast food, and I’m embracing it; I’m one of you.”

The chef issued a stirring defense of anti-hunger policies, noting that Trump had avoided promising to cut social programs, a smart move given that a large portion of his targeted white working-class constituency relies on them. Colicchio said that while Speaker of the House Paul Ryan (R.-Wis.) has been salivating for years at the prospect of slashing food aid programs, there’d be “serious pushback” against efforts to cut them.

Toward the end of the conversation, I realized I was talking to a Manhattan business magnate with strong political opinions and a potent reality TV platform. Since that all sounded extremely familiar, I asked Colicchio whether he’s ever thought of running for president. After a hearty laugh, he said that “unlike some other people on reality TV, I don’t believe I’m actually qualified to do the job.” But he added that “there’s a part of me that would love to run” for a congressional seat on Long Island, where he has a home. Colicchio stressed that he probably won’t, because he has two young children as well as several restaurants to operate. But he sounded quite a bit more open to the possibility than he has in the past—just a year and a half ago, he categorically rejected the prospect of running for Congress.