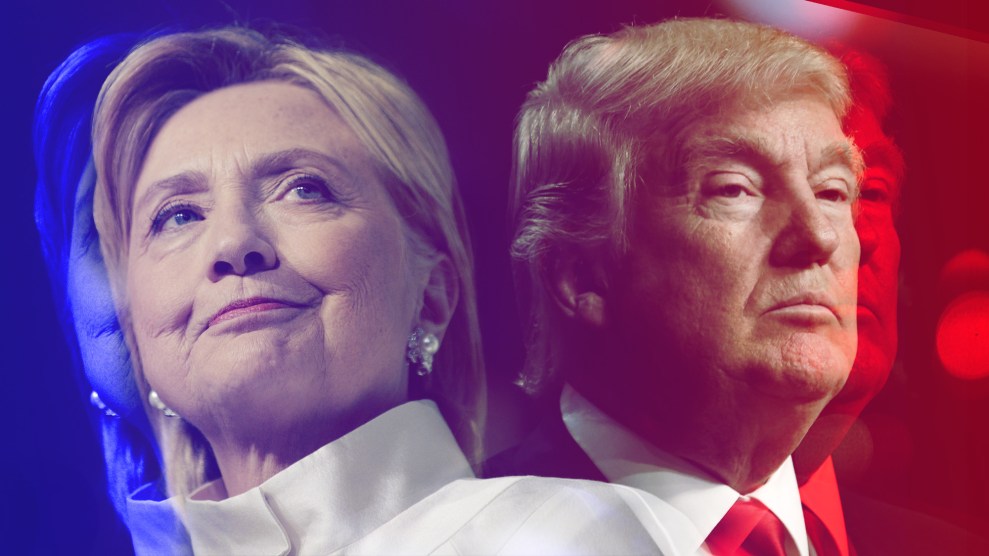 It’s finally here. After two years of campaigning, the presidential race ends tonight. Polls heading into Election Day gave Hillary Clinton a narrow but stable lead. The election hinges on a series of swing states: Arizona, Florida, Iowa, Nevada, New Hampshire, North Carolina, Ohio, and Pennsylvania. Donald Trump needs to win almost all of those states to secure the necessary 270 electoral votes to become president, whereas Clinton has an array of routes to reach that magic number.

This has been an ugly, divisive campaign. While both candidates boast terrible favorability marks, Trump is a historically disliked candidate, thanks to his history of xenophobia, mocking the disabled, alleged sexual assault and general misogyny, enabling white nationalists, Islamophobia, dodging taxes, and screwing over his own employees. It’s hard to document his full history of offensive remarks.

We will be here all night updating you on the latest news. Buckle up. It’s going to be an interesting evening.

2:40 a.m.: CNN and NBC are reporting that Clinton has called Trump to concede.

2:39 a.m.: With the AP and other outlets project that Trump has won the election, reports circulate that Clinton has conceded to Trump over the phone.

BREAKING: SOURCE TELLS ME CLINTON HAS CONCEDED ON PHONE WITH TRUMP

2:07 a.m.: Hillary Clinton’s campaign chairman, John Podesta, took the stage at the Javitz center and told supporters that the Democratic nominee would not be making remarks tonight. “It’s been a long night, and it’s been a long campaign,” he said. “I can say we can wait a little longer, can’t we? They’re still counting votes and every vote should count. Several states are too close to call, so we’re not going to have anything more to say tonight. Everybody should head home, you should get some sleep, we’ll have more to say tomorrow.”

1:43 a.m.: The Associated Press called Pennsylvania for Trump. Neither campaign has officially conceded or announced victory, but Trump is going to be the next president of the United States.

November 9, 12:30 a.m.: The Associated Press has called Nevada for Clinton. It was an absolute must-win for Clinton at this point of the night. Wisconsin, Michigan, Pennsylvania, and New Hampshire still remain outstanding. Clinton likely needs to win all of them, or Trump will almost certainly end up as president.

11:35 p.m.: A string of states have moved into Trump’s column. The networks have called Florida, Iowa, and Utah for the GOP nominee. Things are not looking good for Clinton, who only has a narrow path to victory remaining.

11:09 p.m.: The networks have called North Carolina for Trump. Trump’s surging on election night and could be on a path to a narrow Electoral College victory.

10:40 p.m.: NBC and Fox have called Colorado for Clinton. Her firewall is holding for now, albeit with a very shaky foundation. It’s looking like the race could come down to the upper Midwest, with Wisconsin and Michigan looking mighty close at the moment.

9:06 p.m.: With a large slate of polls closing at 9 p.m., the networks have called a slate of states, mostly for Trump in territories he was expected to claim. The GOP nominee claimed Texas, Kansas, Louisiana, Nebraska, North Dakota, South Dakota, and Wyoming. Meanwhile, in the battle over their home state Clinton is the projected winner of New York.

Of the polls that closed at 9 p.m., Michigan, Wisconsin, Arizona, Minnesota, and New Mexico are too close to call at the moment. And results are still trickling in from the earlier East Coast and Midwestern states, with Ohio, North Carolina, and Florida looking mighty close between Clinton and Trump.

8:30 p.m.: Trump is the projected winner in South Carolina.

7:30 p.m.: West Virginia has been called for Trump. Polls have closed in North Carolina and Ohio.

7:20 p.m.: The North Carolina Board of Elections is keeping some precincts in Durham County, North Carolina, open after the polls close at 7:30 p.m. because of computer glitches at some polling locations earlier in the day.

7:02 p.m.: The networks are projecting that Indiana and Kentucky went to Trump and Clinton took Vermont.

6:15 p.m.: This could be a long night. Hillary Clinton’s campaign manager, Robby Mook, says he doesn’t think North Carolina will be called tonight. That underscores how close the Clinton camp views the contest in the state, which Barack Obama won in 2008 and Mitt Romney carried in 2012. Trump’s path to 270 electoral votes narrows significantly if he loses North Carolina.