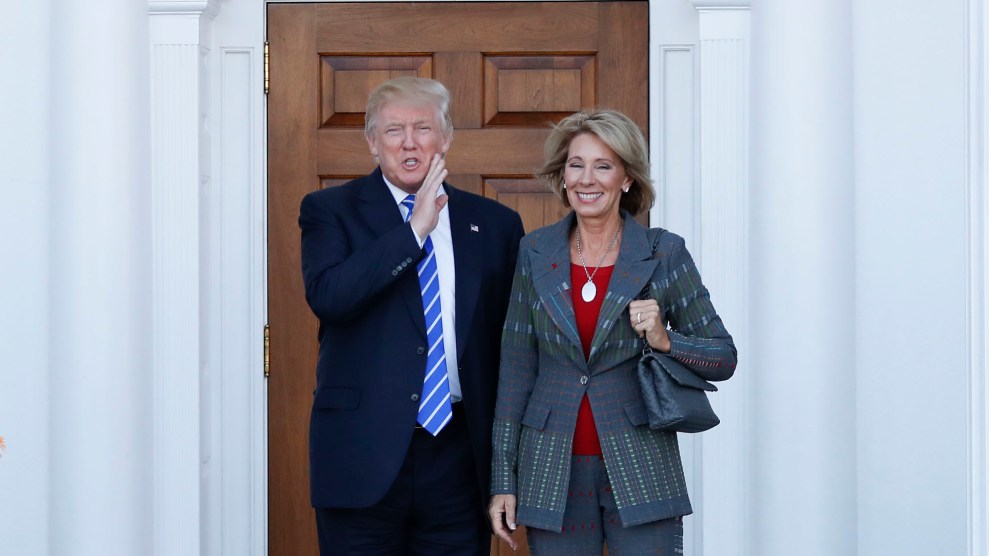 Last Wednesday, President-elect Donald Trump announced that he would nominate billionaire activist and Republican fundraiser Betsy DeVos as his education secretary. The news came as a shock to the education world—DeVos’ ideas for school reforms are even more radical than what Trump proposed on the campaign trail.

Trump’s signature education proposal calls for dedicating $20 billion in federal money to promote “school choice”: market-driven education reforms that help families move away from what Trump has called “failing government schools” and instead choose private, religious, or charter schools. The movement for charter schools is bipartisan: Republicans and many centrist Democrats support it. But the DeVos family has been promoting a much more radical idea of choice—one that favors moving public funding to private and religious schools over charters.

Education historian Diane Ravitch believes that—if confirmed by the Senate—DeVos will become the most radical, anti-public-school education secretary since the Office of Education was established in 1867. “Never has anyone been appointed to lead in the past 150 years who was hostile to public education,” Ravitch told Mother Jones.

Here are the three most important things to know about Trump’s education nominee:

The DeVos family is among America’s most wealthy, conservative clans

A daughter of privilege, DeVos is married to Richard (Dick) DeVos Jr., whose father, Richard Sr., co-founded the multilevel-marketing empire Amway and was worth an estimated $5.1 billion. In 1992, Dick DeVos succeeded his father as the president and CEO of Amway and has been the face of the DeVos political dynasty. While the DeVoses aren’t as well known as conservative philanthropists like the Koch brothers, they played a key role in building the modern conservative movement and pushing the Republican Party further to the right.

Since 1970, the DeVoses have invested at least $200 million in various right-wing causes—think thanks, media outlets, political committees, and advocacy groups—as a 2014 Mother Jones investigation revealed. “There’s not a Republican president or presidential candidate in the last 50 years who hasn’t known the DeVoses,” Saul Anuzis, a former chairman of the Michigan Republican Party, told my former colleague Andy Kroll.

Ahead of the 1980 elections, Ronald Reagan personally asked [Richard DeVos Sr.] to lead the GOP’s national fundraising efforts. Short on cash and reeling from Jimmy Carter’s election and the aftershocks of the Watergate scandal, the party needed all the help it could get. As the Republican National Committee’s finance chairman, DeVos raised $46.5 million ($132 million in today’s dollars). At a party meeting in 1982, he called the recession that was spiking inflation and unemployment “beneficial” and “a cleansing tonic” for society.

In the ’80s and ’90s, Betsy climbed the party ranks to become a Republican National Committeewoman, chair numerous US House and Senate campaigns in Michigan, lead statewide party fundraising, and serve two terms as chair of the Michigan Republican Party. In 2003, she returned at the request of the Bush White House to dig the party out of $1.2 million in debt.

As The New Yorker‘s Jane Mayer pointed out, the selection of DeVos as education secretary flies in the face of Trump’s campaign promises to get rid of the Washington “donor class” that he’s argued is rigging the American system.

And here’s a look at the DeVos family’s giving tree: 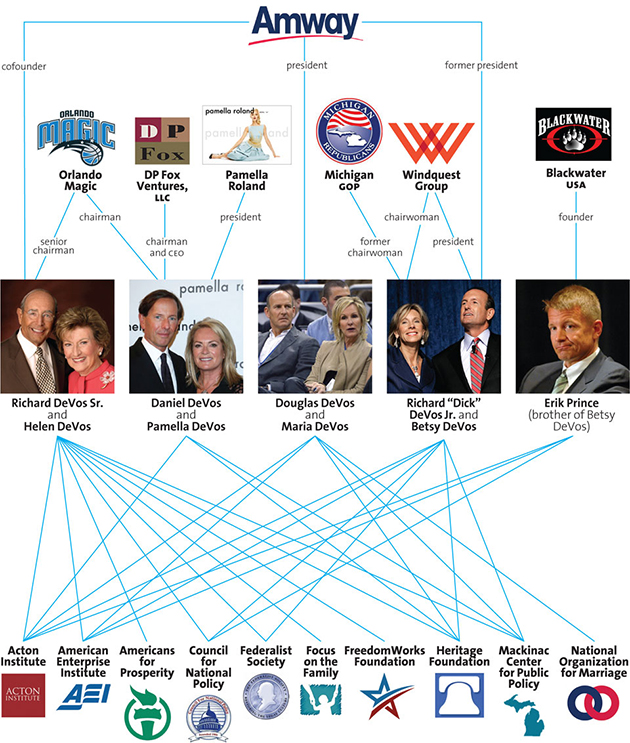 The DeVoses created a road map for conservatives on how to bring down labor, including teachers unions

In 2007, coming off Dick’s unsuccessful gubernatorial bid in their home state of Michigan, the DeVoses focused their advocacy and philanthropy on controversial legislation known as “right to work.” These laws outlaw contracts that require all employees in unionized workplaces to pay dues for union representation. Back in 2007, such a proposal in a union-heavy state of Michigan was considered a “right-wing fantasy,” but thanks to the DeVoses’ aggressive strategy and funding, the bill became law by 2012.

Right-to-work laws, now on the books in 26 states, have been a major blow to the labor movement—including teachers unions. Teachers in Michigan are no longer allowed to strike; when educators in Detroit protested earlier this year against growing class sizes, pay cuts, mold, roaches, and rodents in their classrooms, they had to use their sick days to make their point. (A month after the strike, Betsy DeVos wrote an op-ed in the Detroit News arguing that teachers shouldn’t be allowed to stage sick-outs either.)

Given her track record, there is very good reason to believe that DeVos would push to further erode the power of the teachers unions as education secretary. Randi Weingarten, the president of the American Federation of Teachers—the nation’s second-largest teachers union—called DeVos “the most ideological, anti-public education nominee” in the past four decades.

Michigan serves as one of the most prominent examples of what aggressive DeVos-style school choice policies look like on the ground, especially when it comes to the expansion of charter schools. About 80 percent of state charter schools are run by for-profit management companies, a much higher share than anywhere else in the country, and with very little oversight from the state. And this year, the DeVoses were the biggest financial backers of the effort to oppose any new state oversight of charters.

Detroit, in particular, provides a cautionary tale of how the proliferation of charter schools without sufficient regulations hurts student achievement. Detroit’s public school test scores in math and reading on the National Assessment of Educational Progress have remained the worst among large cities since 2009. In June, the New York Times published a scathing investigation of the city’s school district, which has the second-biggest share of students in charters in America. (New Orleans is No. 1.) Reporter Kate Zernike concluded that insufficiently regulated growth—including too many agencies that are allowed to open new charter schools—contributed to a system with “lots of choice, with no good choice”:

The unchecked growth of charters has created a glut of schools competing for some of the nation’s poorest students, enticing them to enroll with cash bonuses, laptops, raffle tickets for iPads and bicycles. Leaders of charter and traditional schools alike say they are being cannibalized, fighting so hard over students and the limited public dollars that follow them that no one thrives. Michigan leapt at the promise of charter schools 23 years ago, betting big that choice and competition would improve public schools. It got competition, and chaos.

Perhaps even more than her push for charter schools, Betsy DeVos is known as a fierce advocate for the expansion of vouchers. Until about 2000, using public funding to pay for private and religious schools was a fringe idea, but the DeVos family worked diligently to push it to the center of the Republican Party. Today, 13 states have active voucher programs, in addition to the District of Columbia. DeVos serves on the board of the American Federation for Children, a national group that has pushed for school vouchers even as their record for improving student achievement is mixed, at best. As Douglas Harris, an economist at Tulane University and director of the Education Research Alliance for New Orleans, wrote in a New York Times op-ed, “Students who participated in [Louisiana’s] voucher program had declines in achievement tests scores of eight to 16 percentile points. In Ohio, the results were also negative (though less so).”

If Trump’s voucher agenda moves forward, it is also possible that the federal government could send some Title 1 funding, a $15 billion program that exclusively funds low-income public schools, to high-income private and religious schools. If that becomes policy, DeVos—a billionaire who never sent her children to public schools—could oversee the erosion of one of the most important federal school programs created to serve America’s most vulnerable kids.