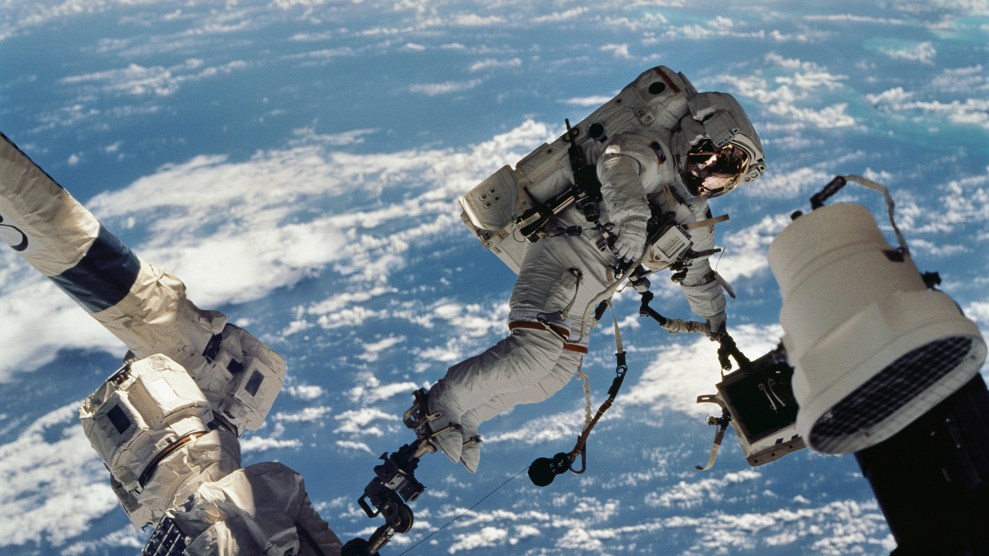 When Donald Trump visited Florida last week, he suggested a new theme for his presidential campaign in its waning days: Make NASA Great Again. “I will free NASA from the restriction of serving primarily as a logistics agency for low Earth orbit activity,” Trump promised. “Big deal. Instead, we will refocus its mission on space exploration. Under a Trump administration, Florida and America will lead the way into the stars. With a victory in November, everything will change.”

Trump’s campaign has been defined by a lack of his policy details. The specifics of his border wall have shifted constantly, his tax proposals require great imagination to make the numbers add up, and his alternative to Obamacare is “something terrific.” His Washington, DC, policy shop dissolved this fall after he failed to pay its staffers.

But in crunch time before Election Day, Trump brought in an outside expert to craft a surprisingly detailed and ambitious space policy—one that aims far higher than proposals by Barack Obama or Hillary Clinton.

Trump’s newfound interest in the heavens was born more of humiliation than enthusiasm. Last month, the Trump and Clinton campaigns submitted responses to a questionnaire from Space News. Clinton offered substantive, detailed answers to the nine questions. Trump barely mustered any response except for vague praise for the space program. On the final question—”Any other comments you would like to make?”—the Trump campaign simply responded, “No.”

“That was reasonably embarrassing,” says Robert Walker, a former Republican congressman who chaired the Science, Space, and Technology Committee in the 1990s. Walker was approached soon after the questionnaire about advising the Trump campaign on space policy. “I think some of the impetus was people saw that and said, ‘Hey, we need to be saying something rational on these programs.'”

Walker says he got a call from Trump Tower to write up a plan on the quick, and that the Trump campaign incorporated most of Walker’s proposals into the campaign platform. Since then, Walker (along with fellow Trump “senior policy adviser” Peter Navarro) has penned two op-eds in Space News fleshing out Trump’s new vision.

Trump’s space plan focuses on eliminating bureaucratic overlaps in the federal government and setting ambitious goals for human exploration. “Talking about that is a stretch goal, in the same way that going to the moon was a stretch goal,” says Walker, who is not being paid by the campaign. “But the technological backwash that you get from a stretch goal is pretty substantial.”

Obama, following other presidential moonshots, has set goals of visiting an asteroid by 2025 and reaching Mars sometime in the 2030s. Walker and Trump propose just one deadline: exploring the farthest reaches of the solar system by the end of the 21st century. Mars is too limited a target, Walker says, since existing chemical-fueled rockets (similar to those used for the Apollo and Space Shuttle programs) could get the job done with some investment. “If you’re looking at technology that looks for the solar system, you are then likely to move toward plasma rockets, toward nuclear-powered rockets, certainly toward solar sails,” he explains. “There are a variety of things that you can do, which allows you to apply power throughout the mission.” Among the farther-flung destinations Walker hopes to reach is the Jupiter moon Europa.

Trump’s plan doesn’t exactly spell out how to meet those lofty goals; the idea is to set the endpoint to spur technology along the way. Walker is pessimistic that more money will be devoted to space research. (NASA currently gets about 0.5 percent of the federal budget, whereas during the glory years of the Apollo missions it received more than 4 percent.) Instead, he proposes a national space council that would coordinate among NASA, military space programs, and commercial endeavors. And much of the low Earth orbit research currently conducted by NASA would be shifted to the private sector, with the International Space Station opened up to private enterprise.

NASA’s mission isn’t just about exploring the stars, though. The agency operates many Earth-observation programs that have contributed to our knowledge of climate change. Trump has long been a skeptic of global warming, calling it a Chinese hoax. His plan for space would move those programs to what Walker calls a “more appropriate place to do it,” most likely the National Oceanic and Atmospheric Administration. But since Trump isn’t promising any additional funds to NOAA for these new responsibilities, the result could be pressure to cut back on climate change research.

“It would be up to NOAA to make decisions in the future,” Walker says, “but the operation of the stuff that’s now on orbit would be done by that agency.” Trump’s ambitions for NASA, like so many of his proposals, can’t be constrained by the world as we know it.