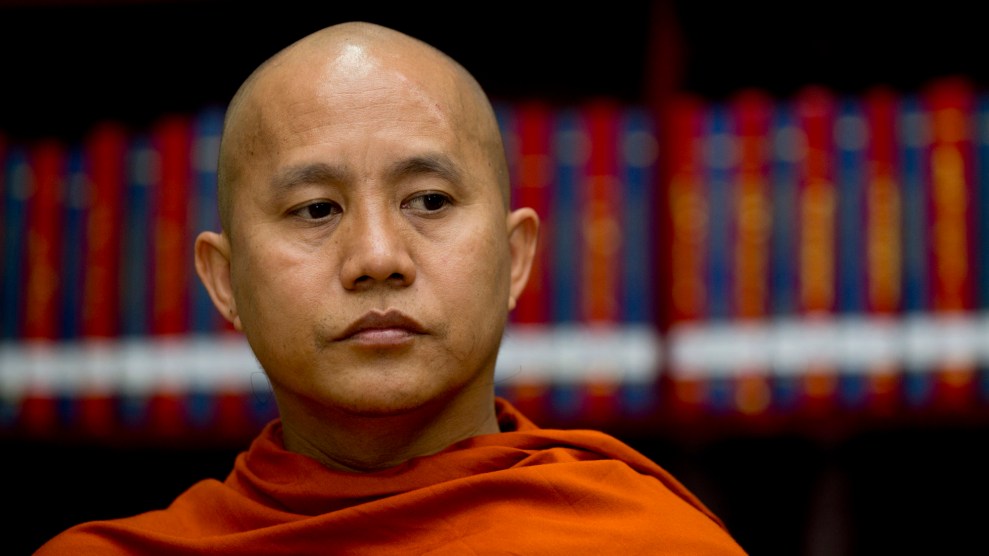 After Donald Trump’s unexpected victory, a number of prominent international figures have congratulated the Republican president-elect—perhaps none stranger than a vitriolic monk in Burma known as the “Buddhist bin Laden.”

The monk, named Wirathu, is famous in Burma for his passionate, anti-Muslim speeches that have fueled widespread anti-Muslim sentiment and violence in the majority Buddhist nation that’s nestled between China and India. Also known as the “Buddhist face of terror,” he has called for boycotts of Muslim-owned businesses and spread rumors that Muslim men are trying to rape Buddhist women. “Muslims are only well behaved when they are weak,” he has said. “When they are strong they are like a wolf or a jackal, in large packs they hunt down other animals.”

This week, Wirathu took to Facebook to express his delight at the outcome of the US election, writing a four-line poem for the occasion: “Public security is the most important consideration/Donald Trump is the real leader/People love him so much/Nationalism is the priority.”

“Public security is the most important consideration/Donald Trump is the real leader/People love him so much/Nationalism is the priority.”

Trump, who has called for the United States to ban Muslims from entering the country, is popular among many anti-Muslim nationalists in Burma (which is also known as Myanmar). Some locals have drawn parallels between the real estate mogul and Wirathu (who denies allegations that he’s a terrorist and says he hasn’t advocated violence); the Myanmar Times, an English-language newspaper there, launched a series called “Who Said It: Trump or Wirathu?” that asked readers to guess which man had uttered certain statements.

On the heels of his win, Trump also received congratulations from the Arakan National Party, a political party in Burma that has campaigned passionately against Rohingya Muslims, a persecuted minority group who have been targeted by violent Buddhist mobs. The ANP says the Rohingya are illegal immigrants from Bangladesh who need to be expelled from Burma, though many of their families have lived in the country for generations. “Being engulfed in Islamization and illegal immigration problems, we…look up to you as a new world leader who will change the rigged system being infested with jihadi infiltrators,” the ANP’s chairman wrote in a statement to Trump on Wednesday.

Still, not everyone in Burma is excited about a Trump presidency. Though a spokesman for the Burmese president said he thought relations between the two countries might improve under Trump, many other Burmese have expressed dismay at the business mogul’s rise to power. “I wanted Hillary Clinton to win in the election,” Win Htein, a spokesman for the country’s ruling party, the National League for Democracy, told the Myanmar Times. (Clinton helped forge closer US-Burma ties while serving as secretary of state.) “Trump would not even know where Myanmar is, if asked.”