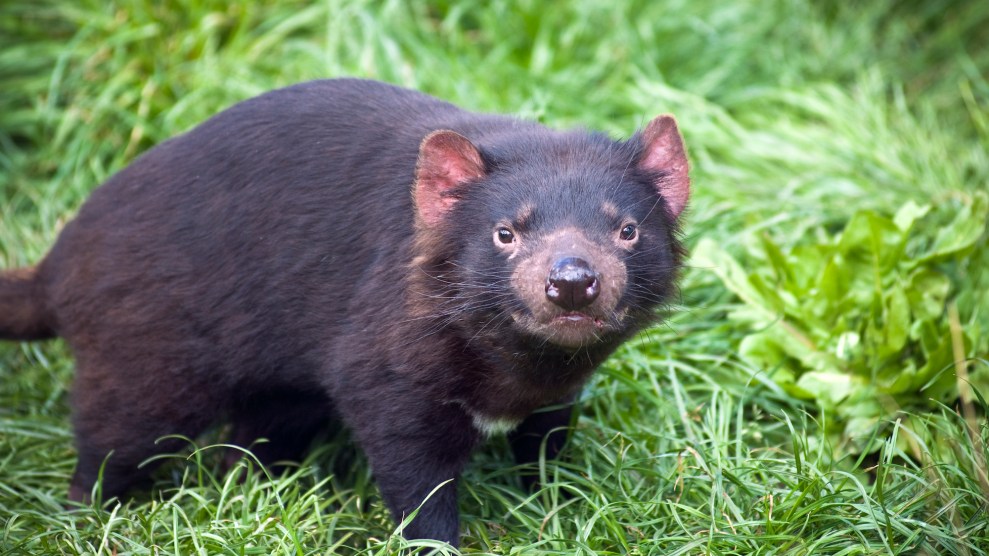 Even though they’re cute, Tasmanian devils really do exhibit somewhat diabolical behavior. Turns out, these kitty-sized marsupials might just be fierce enough to stare down one of the nastiest health crises facing humanity: the rise of antibiotic-resistant pathogens, which kill 700,000 people per year globally and about 23,000 people in the United States.

No, ERs and doctor’s offices won’t keep a pet devil around to bare its fangs at samples of hard-to-treat E. coli. What physicians may someday do is treat patients with antibiotics derived from compounds found in devil milk. Vice‘s Kaleigh Rogers puts it like this:

Tiny devil babies are born after just 30 days of gestation, and their immune systems are not fully developed. They continue to grow from the safety of their mother’s pouch, but that doesn’t protect them from potentially dangerous bacteria, viruses, and fungi. Instead, the babies build up immunity partly through drinking their mother’s milk, which is full of cathelicidins—small compounds of amino acids that work like natural antibiotics.

For a recently published paper, scientists at the University of Sydney isolated the cathelicidins and sicced them on a range of resistant bacteria—and two of them worked. They also found that like many existing antibiotics, cathelicidins are toxic to humans in high amounts, but safe at medicinal doses.

The findings, while promising, don’t point to a solution for the resistance threat. For one thing, the compounds need to be tested further and approved by regulatory agencies, and pharmaceutical companies need to figure out how to produce them at scale at a viable cost. Ever tried to milk a Tasmanian devil? Actually, the challenge will be figuring out to economically synthesize large amounts of those cathelicidins.

More broadly, we desperately need new drugs to treat resistant pathogens; but microbes evolve and swap genes rapidly, and they’ll eventually outfox even these Tasmanian devil compounds if we continue overusing antibiotics in human medicine and on farms.