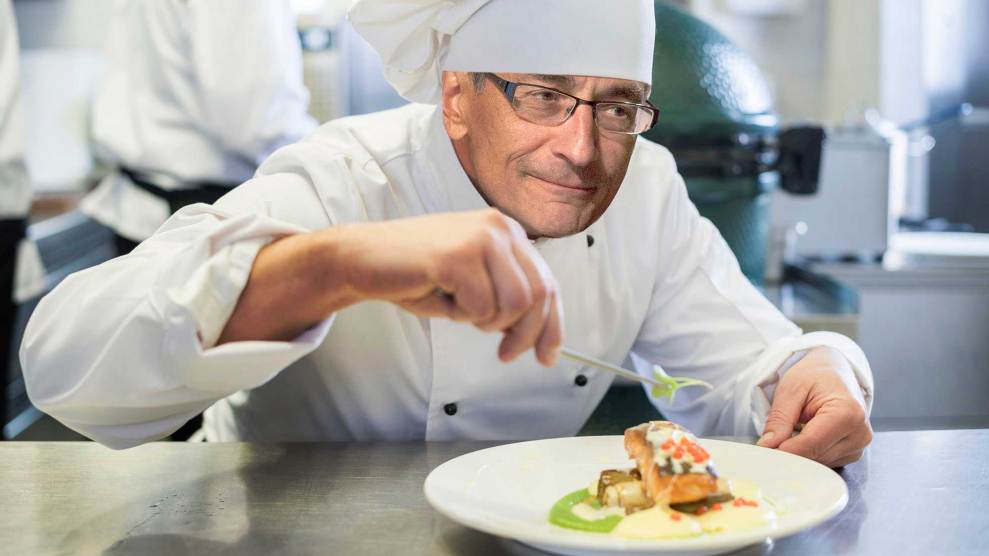 Huffman: So I have been making a lot of risotto lately…and regardless of the recipe, I more/less adhere to every step you taught me. Question: why do I use a 1/4 or 1/2 a cup of stock at a time? Why can’t you just add 1 or 2 cups of stock at a time b/c the arborio rice will eventually absorb it anyway, right?

Podesta, who’s well-known for his culinary acumen, takes around 18 hours to respond. On September 19, he shoots back with:

Yes and no
Yes it [sic] with absorb the liquid, but no that’s not what you want to do. The slower add process and stirring causes the rice to give up it’s starch which gives the risotto it’s creamy consistency. You won’t get that if you dump all that liquid at once.

This widely-held assertion ruffled the feathers of MoJo CEO and European Victual Advisor Monika Bauerlein, who contends that pro risotto can easily be executed by dumping in all of the liquid at once. She’s not alone. As Food and Wine pointed out, respected cookbook author and chef J. Kenji López-Alt disagrees with Podesta’s claim.

Myth myth myth! You CAN add all the liquid at once for risotto, no problem. https://t.co/5Uxl9BwUKH

Podesta might be one of the most powerful and influential figures in American politics right now. But López-Alt has science on his side. As he argues in his James Beard Award-winning magnum opus The Food Lab: Better Home Cooking Through Science, cooking the dish in a wide, shallow pan on low heat enables the rice to spread out and heat evenly in the broth. He explains in a post on his blog Serious Eats:

By cooking rice in a wide skillet like this, I found that I could get perfect results by adding the rice and almost all of the liquid at once, covering, and cooking over very low heat until the rice was done, stirring just once during the process.

That’s not the only shocker to come out of the WikiLeaks emails. Here’s a round-up of some more food-related revelations:

“For some inexplicable reason, my MRE contained PB and tortillas,” wrote Podesta’s son.