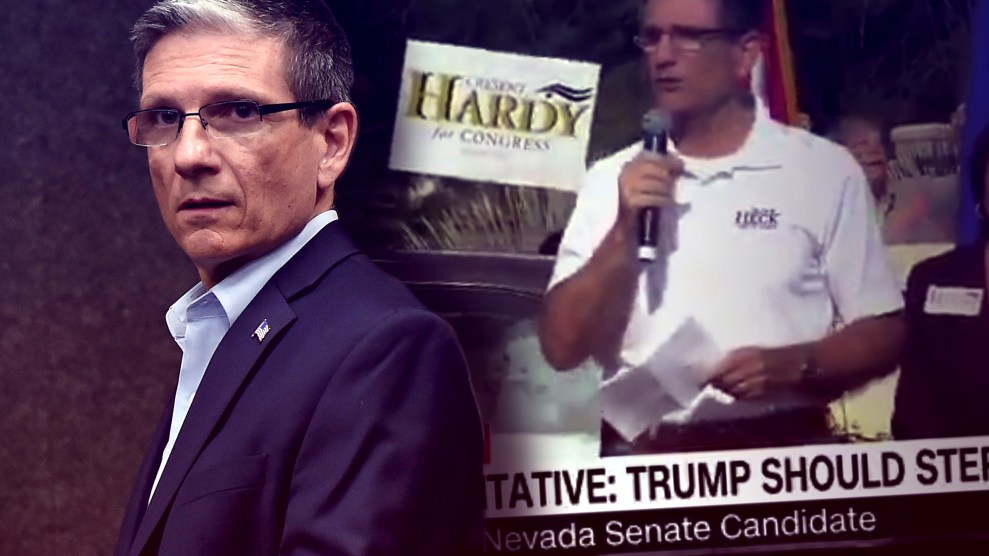 The Republican running for US Senate from Nevada was angrily booed at his own campaign rally today when he told the crowd that he could no longer support Donald Trump and that the GOP nominee should drop out of the race.

Joe Heck, campaigning to take retiring Harry Reid’s seat, gets heckled and booed after saying Trump should drop out pic.twitter.com/mwD4HiRpyJ

Heck was reacting to the 2005 video published Friday by the Washington Post, in which Trump bragged that his fame enabled him to “do anything” to women. “Grab them by the pussy,” he said in the video. “You can do anything.”

At the rally, Heck—a congressman locked in a tight race to fill Harry Reid’s seat in the Senate—said, “I can no longer look past the pattern of behavior and comments that have been made by Donald Trump. Therefore I cannot in good conscious continue to support Donald Trump. Nor can I vote for Hillary Clinton.” That drew a mix of applause and jeers.

Moments later, when Heck said that Republicans should “formally ask Mr. Trump to step down” from the ticket, the crowd erupted in loud boos.

Heck is one of several prominent GOP politicians to un-endorse Trump in the wake of Friday’s revelations. Others include New Hampshire Sen. Kelly Ayotte, Idaho Sen. Mike Crapo, and Utah Rep. Jason Chaffetz.