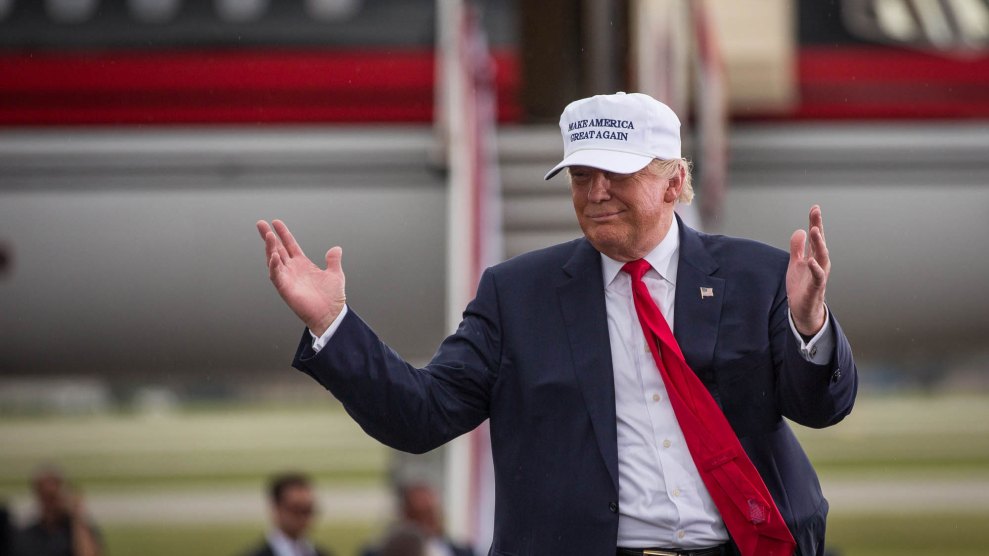 At a Thursday afternoon rally in West Palm Beach, an angry Donald Trump railed against the women who have accused him of sexual assault, promising that he would soon release evidence that would clear him of any wrongdoing and reveal the whole thing to be a sordid “conspiracy.” But even before the Republican nominee took the stage, many of the supporters who crowded into the hall at the South Florida Fairgrounds had already made up their minds: Donald didn’t do it. And besides, others rationalized, if he did it, it was a long time ago, and have you heard about Bill Clinton?

I am reliably informed by these nice ladies that Bill Clinton was impeached for rape, but “you’re probably too young to remember.” pic.twitter.com/6eLPL0eRDs

Trump backer Gloria Bachhus brought up the sexual assault allegations against Trump before I had a chance to ask her a question. “Oh, you’re a reporter? I’ve got something to tell you,” she said. “I’m in the aviation business. They said some stupid thing that Trump in 1981 was grabbing a woman, and she said that she was sitting in first class.” She grabbed my arm for emphasis. “Listen to me: She said that the [armrest] wasn’t down. Well, in first class they don’t have arms in the plane, in 1981. So she lied, okay? We know in the aviation business, first class does not have an arm! It has it in economy. You sit down and you separate from all the people on both sides. In first class you have your big seat and you don’t have an arm.” (Jessica Leeds, one of the women who has accused Trump of groping her, told the New York Times that Trump had lifted the arm rest and began touching her during a flight several decades ago.)

“They’re very weak, insincere,” another Trump supporter, Charles Wood, said of the GOP nominee’s accusers. “Probably not true.” When I asked why he thought they would make their stories up, his wife jumped in. “Money! And fame, attention.”

“I’m just so sick of all that,” Nancy King told me as she leaned against the steel dividers separating the press from the audience. “These women that 13 years later, all of a sudden, it’s just crazy. You know? To me, a person’s character, yes, that’s important, but the women’s character is just as bad. I mean just the fact that they would come out 13 years later and try to prove that. I see that as being opportunist.”

Maureen Salvo, an immigrant from the United Kingdom who told me “all the strong women” at her condo are voting for Trump, needed one word to sum up her feelings about the groping allegations. “Bullshit! Bullshit! Bullshit!” she said. “I think Clinton is corrupt, she’s getting scared now. They’re all coming up—I think she got them to say what she wants.” But even if the reports were true, that wouldn’t change Salvo’s preference. “He’s just a man,” she said. That’s what men do.

Like a number of voters, Nancy Severson from Wellington was suspicious of why allegations of Trump’s inappropriate conduct were just coming out now. “That’s a little late for that. I mean, I’m certainly not for men taking advantage of women or women taking advantage of men, but in this case, it seems like the timing is questionable—why it’s coming out now.” So who was behind it? “Oh, I definitely think it’s her campaign,” she said, referring to Hillary Clinton. “There’s a whole spin thing going on over there.”

Lisa Branden, a supporter from Royal Palm, Florida, who hoped that Trump might help her get better health insurance, told me, “I’m not worried about it.” Why not? “Look, they’re all against him—the media, the mainstream media, Washington—they’re all up against Trump, so they’re gonna throw everything they have at him. I told my husband that from the beginning. They’re gonna try to bring him down any way they can.”

While most Trump supporters expressed concerns about the media (more than a few held up signs calling CNN “Clinton News Network”), none were as fatalist as Ron Guziek, a bearded man in a “Daytona Bike Week” T-shirt. “It’s not going to have an effect,” he said of the sexual-assault allegations. “The Bilderbergers have already decided who’s going to win.”