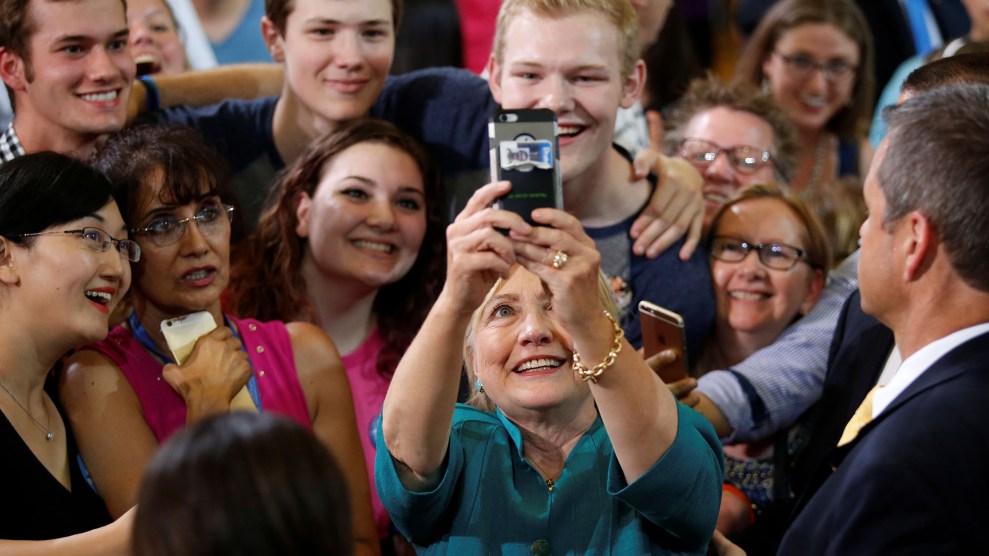 After laboring for months to appeal to young voters, Hillary Clinton appears to have reached the same level of support among millennials that President Barack Obama had in 2012. But even that good news comes with troubling new evidence: While young white voters are backing Clinton strongly, young voters of color have yet to warm to her as they did to the man she hopes to succeed.

A new GenForward survey by the University of Chicago finds that Clinton leads Donald Trump, 58 percent to 17 percent, among likely voters between the ages of 18 and 30. A month ago, GenForward put her lead among young likely voters at 51 percent to 22 percent. When the sample includes voters who are leaning toward a candidate, Clinton now has 60 percent support to Trump’s 19 percent—a comparable support level to Obama, who received 60 percent of the vote among this age group in 2012.

“Overall, the level of youth support for Hillary Clinton looks nearly identical to youth support for Barack Obama in 2012,” Cathy Cohen, founder of the GenForward survey and Black Youth Project at the University of Chicago, said in a press release. “However, the coalition of young voters supporting Hillary Clinton is not the same as the coalition that helped elect Barack Obama in 2012.”

Clinton’s growing support among millennials is led by young whites. A month ago, she and Trump were tied in the GenForward survey among young white voters. Now Clinton leads by 14 points; among young whites who are likely to vote, she leads Trump 51 percent to 23 percent, a 28-point advantage.

But Clinton has failed to match Obama’s levels of support among minority millennials—even though these voters soundly reject Trump. Clinton leads Trump among young African Americans who are likely to vote by a huge margin, 76 percent to 3 percent. Among young Asian American likely voters, she’s up 74 percent to 9 percent, and among young Latino voters her advantage is 57 percent to 13 percent. For each of those groups, Obama’s support in 2012 was about 10 points higher than Clinton’s now. But Clinton beats Obama’s margin among white millennials by eight points.