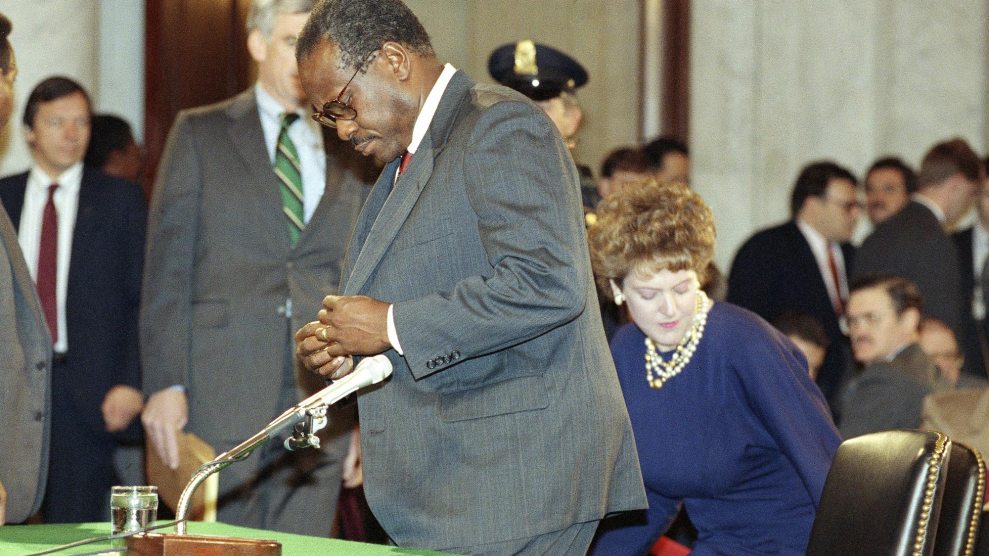 On October 7, the Washington Post published a leaked Access Hollywood tape of Donald Trump boasting of groping and kissing women without their consent. As the fallout from the tapes began, Moira Smith, a 41-year-old attorney, took to Facebook to recount her own allegation of being groped by a powerful man—Supreme Court Justice Clarence Thomas, who was accused of sexual harassment by Anita Hill during his Supreme Court confirmation process in 1991.

According to the National Law Journal, Smith posted the following on her Facebook page the night the Trump tape came out: 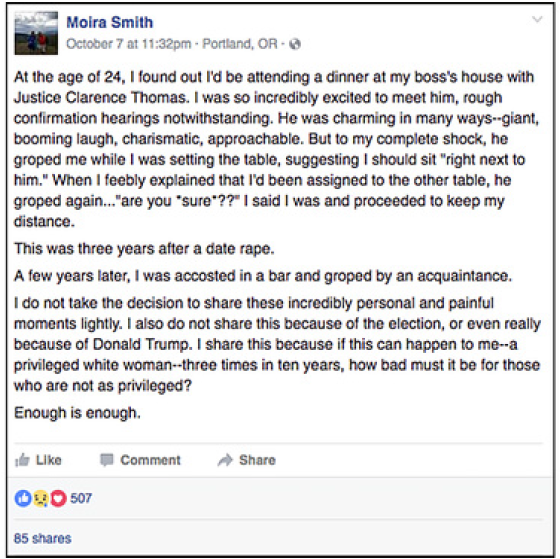 Smith has deactivated her Facebook account since publishing this post. She recounted additional details of her alleged interaction with Justice Thomas to the National Law Journal.

A 1997 Truman Scholar studying at Georgetown University’s School of Foreign Service, Smith stayed in Washington, DC, to work for the Truman Foundation as a resident scholar through August 1999, helping to coordinate various foundation projects. In that capacity, she helped her boss, Louis Blair, host a dinner party at his home in suburban Virginia, which was attended by Justice Thomas, according to Smith and several others who were there. The justice was set to present David Adkins, then a Kansas lawmaker, with an award the following day at the Supreme Court. While she helped to prepare appetizers and set the table, Smith says she approached the table where Justice Thomas was sitting.

“I was setting the place to his right when he reached out, sort of cupped his hand around my butt and pulled me pretty close to him,” Smith told the National Law Journal. “He said, ‘Where are you sitting?’ and gave me a squeeze. I said, ‘I’m sitting down at the garden table.’ He said, ‘I think you should sit next to me,’ giving me squeezes. I said, ‘Well, Mr. Blair is pretty particular about his seating chart.’ I tried to use the seating chart as a pretext for refusing. He one more time squeezed my butt and he said, ‘Are you sure?’ I said yes, and that was the end of it.”

Three former roommates of Smith’s, as well as a former colleague from the Truman Scholar program, told the National Law Journal that they remembered Smith recounting this event to them shortly after it happened. Blair as well as Adkins said they had no memory of Smith telling them about the incident. The National Law Journal contacted Justice Thomas, who replied, through a Supreme Court spokeswoman, “This claim is preposterous and it never happened.” When contacted by Mother Jones, Justice Thomas’ office declined to offer further comment and referred to the Journal‘s story.

When contacted by Mother Jones to ask if the flurry of allegations against Trump affected her decision to come forward with her claim, Smith replied in an email, through a spokeswoman: “As the mother of a young daughter and son, I am coming forward to show that it is important to stand up for yourself and tell the truth. When powerful men commit sexual assault, they count on their victims keeping it a secret. When Justice Thomas touched me inappropriately and without my consent, I was 23 years old—and felt there was nothing I could do. Seventeen years later, it is clear that sexual harassment, misconduct and assault continue to be pervasive, having an impact on all women.”