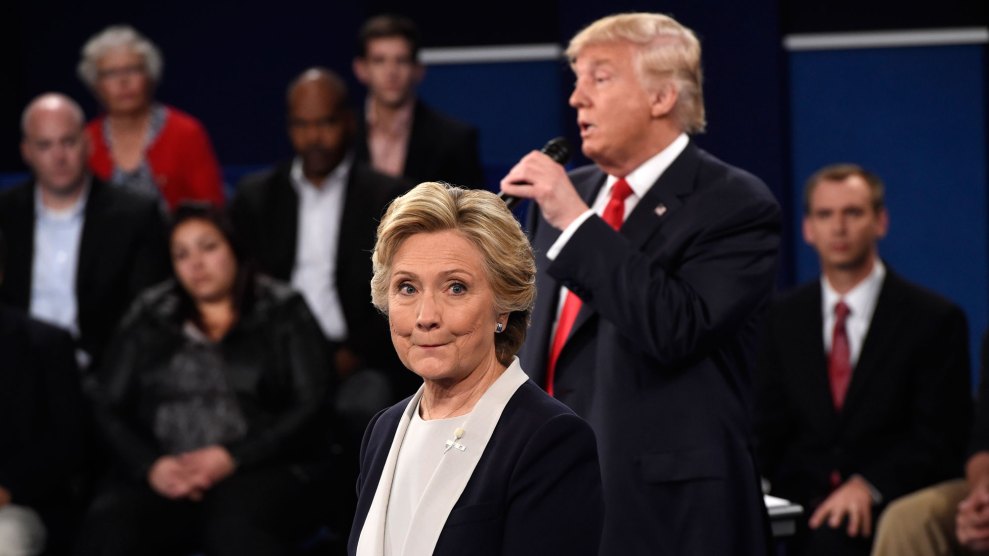 Hillary Clinton events are a master class in stagecraft, each as perfectly choreographed as the next, but every once in a while the barely controlled chaos of her rival’s campaign intrudes. At a Clinton rally last week at the Kendall, Florida, campus of Miami-Dade College, that moment came a few minutes into her speech, when a young man in an American Eagle T-shirt began shouting “Bill Clinton’s a rapist!” The protester was escorted out, and Clinton resumed discoursing about climate change and rising sea levels in Miami Beach until, a few minutes later, another protester shouted the same thing. He, too, was ushered out, and Clinton returned to her stump speech.

The scene in Kendall could have been a metaphor for the race itself: a by-the-book campaign sticking relentlessly to the script while a crazed man keeps shouting about rape. As the presidential contest lurches toward Election Day, both candidates are throwing everything they can into Florida, a state Trump must win and Clinton would really like to. The former secretary of state’s visit to Miami-Dade, where she was joined by Al Gore, preceded a three-day, four-stop swing by Donald Trump from the Panhandle to Palm Beach County. Sen. Tim Kaine flew in for a Saturday block party in Miami’s Liberty City and a Sunday morning visit to a Spanish-speaking church. Gov. Mike Pence held a Pensacola rally Friday and attended a Miami-Dade Republican dinner that night. Earlier in the week, former President Bill Clinton stopped in three cities to push voter registration. Yesterday, President Barack Obama rallied voters in Miami Gardens.

But the two campaigns may as well be operating in parallel universes, differing wildly in style and substance. Clinton events are displays of total solidarity. In Kendall, she was joined by Rep. Patrick Murphy, who is challenging Republican Sen. Marco Rubio in one of the year’s most important Senate races. Former Rep. Joe Garcia, who is challenging Republican Rep. Carlos Curbelo in one of the year’s most expensive House races, lingered in the back of the gym, posing for photos and gabbing with press and supporters. Even Gore showed up to deliver a rambling speech in a county he could be forgiven for refusing to visit ever again. You couldn’t sit in traffic for very long in South Florida without hearing radio ads from a stable of Clinton endorsers, including former CIA director Michael Morell, first lady Michelle Obama, and Miami Rep. Frederica Wilson.

As Clinton herds her party, Trump is still fighting with his. His rallies in West Palm Beach and at Lakeland in central Florida were notable for how few Republicans of note attended. Rubio is supporting Trump, at least in theory, but has not been in the same building as the man he once mocked for having a small penis since their final primary debate in March. Curbelo, like numerous other South Florida Republicans, rejected Trump last spring. The absences did not go unnoticed: The campaign itself brought them up as evidence that party leaders were undermining Trump’s candidacy. A state representative who spoke at Trump’s West Palm Beach rally was introduced as “the only elected official who showed up today,” to jeers from the crowd. When it was her turn to speak at the event, former Lt. Governor Jennifer Carroll—who resigned in disgrace midway through her first term in 2013 amid state and federal probes relating to her ties to a veterans charity—admonished the state’s elected Republicans for choosing to “cut tail and run” from the nominee. Instead of denouncing Trump’s comments about women on a decade-old Access Hollywood tape, she said, conservatives should have saved their criticism for the corrosive morality of Hollywood culture.

In his Florida swing, Trump brought a message as insular as his movement. As he reeled from a flood of allegations of sexual assault over a period spanning several decades, he seemed to cede the entire universe of undecided or persuadable voters to his opponent, preferring instead to retreat into the frenzied and paranoid style that got him into this mess. In West Palm Beach, Trump devoted the first 22 minutes of his speech to a series of attacks on the journalists who reported those sexual assault allegations and mocked the physical appearances of the women who made them. He railed against the “international banks” and charged a “conspiracy” between “corporate” journalists and the Clinton campaign to undo the very fabric of democracy through a rigged election.

His audience, in “Deplorable Lives Matter” T-shirts and clutching “CNN Sucks!” signs, ate it up. At a time when most campaigns would throw every resource they have into leveraging volunteer work and candidate visits into real votes, Trump rallies were an end unto themselves. The importance of voting was explicitly downplayed by the message onstage; why bother if the election will be stolen anyway? This in a state where Trump didn’t even open a second field office until September, and where Republican candidates elsewhere have a vested interest in turning out independent-minded Clinton supporters. Although a few speakers at Trump events did mention the looming voter registration deadline, which a court had extended over the wishes of Trump-backing Gov. Rick Scott, it had less the feel of an earnest get-out-the-vote event than of a frustrated, fatalist protest.

Even the opening prayer at Pence’s Miami speech carried a whiff of paranoia: “Father we declare a turnaround in the elections. Father we pray that there will be an exposure of the corruption in government as it is today, and that the media will no longer be able to silence the truth.”

If Trump’s pitch to voters was that reporting about his alleged sexual assaults represented an existential threat to the republic, Clinton preferred to focus on actual existential threats. Her campaign ads warn about Trump’s stated affinity for nuclear weapons, and onstage with Gore she launched into perhaps the most intensive discussion of climate change by any presidential candidate ever—a full hour, between the two of them, on such minutiae as oyster bed rehabilitation and turning landfills into solar farms. Climate change would expand the habitat of mosquitoes carrying Zika and of ticks carrying Lyme disease, she said. She mentioned the California drought and wildfires out west. She brought up, to mockery, Trump’s charge on Twitter that the climate change hoax was created by the Chinese—a tweet he subsequently denied writing but, as she noted, had still not deleted. But mostly she talked about the economic impact of those projects, in states such as Alaska and South Carolina, which were once thought to be out of play for a Democratic nominee but which she now has as good a shot of winning as Trump does of, well, Florida.

Boring was the point. With a million absentee ballots cast and early voting in South Florida four days away, Clinton’s campaign is seeking to run up the score, while Trump seems bent on settling one.