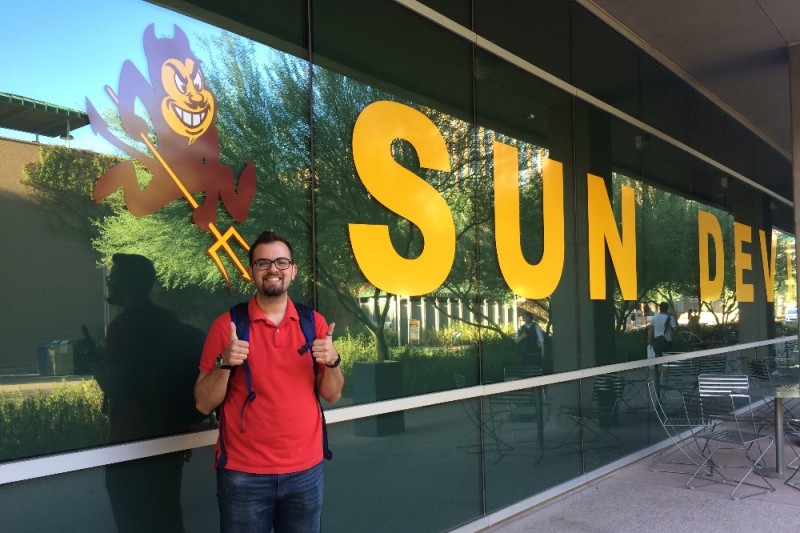 An hour before his first day of class at Arizona State University, Eduardo Lujan-Olivas’ dream of receiving a college education came crashing down. In a cruel last-minute twist, ASU officials informed the young man that he would not, in fact, have the scholarship that was his best hope, maybe only hope, to make it through a four-year college.

Lujan-Olivas is an undocumented student who four years ago was the beneficiary of Deferred Action for Childhood Arrivals (DACA), an immigration policy that allows some undocumented people who came to the United States as children to defer deportation for some time. Although the policy meant he could work and attend school here in the States, he was ineligible for the All-Arizona Community College Academic Team scholarship—more than $20,000 worth of aid that would have helped get him through two years at ASU’s Barrett, The Honors College. A Maricopa County Superior Court ruled last year that undocumented students who have work visas can receive in-state college tuition, but under Proposition 300, a measure Arizona voters passed in 2006, undocumented students may not receive financial aid from the state.

“I cannot describe the frustration, disappointment, and confusion I felt when I received the phone call.”

The revocation came as a shock to Lujan-Olivas, who saw in his student account before classes started that the scholarship had been approved. So how was he led to believe he would get the aid? There seems to have been a miscommunication between Pima Community College (from which he was transferring to ASU) and the Arizona Board of Regents. According to Tucson.com, the board “acknowledged that it didn’t communicate DACA students’ ineligibility” to the student’s community college.

Lujan-Olivas has struggled personally and financially to get this far in his education, he explained on a GoFundMe page he set up in the hope that some kind souls would help him with his predicament. “I cannot describe the frustration, disappointment, and confusion I felt when I received the phone call,” he wrote.

Lujan-Olivas is one of many undocumented college students—commonly referred to as DREAMers (after the DREAM act)—in educational limbo in Arizona, where even in-state tuition can be hard to manage. “The other options outlined by the Financial Aid Office are not feasible and jeopardize my educational goals,” Lujan-Olivas wrote on his funding page. Another undocumented student, Cristian Arcega, was part of an underdog team of Phoenix high schoolers who in 2004 beat out MIT students to win a national robotics contest, but similarly lost out on a scholarship to ASU his first year of college thanks to Prop 300.

Arizona, of course, is notorious for hard-line immigration policies, and for passing controversial laws targeting undocumented immigrants. Then there’s Maricopa County Sheriff Joe Arpaio, who served as a warm-up act for Donald Trump’s recent Arizona speech on immigration. That speech did not bode well for students like Lujan-Olivas. Trump promised that his first priority as president would be to start deporting America’s undocumented millions: “Day one, my first hour in office, those people are gone!”