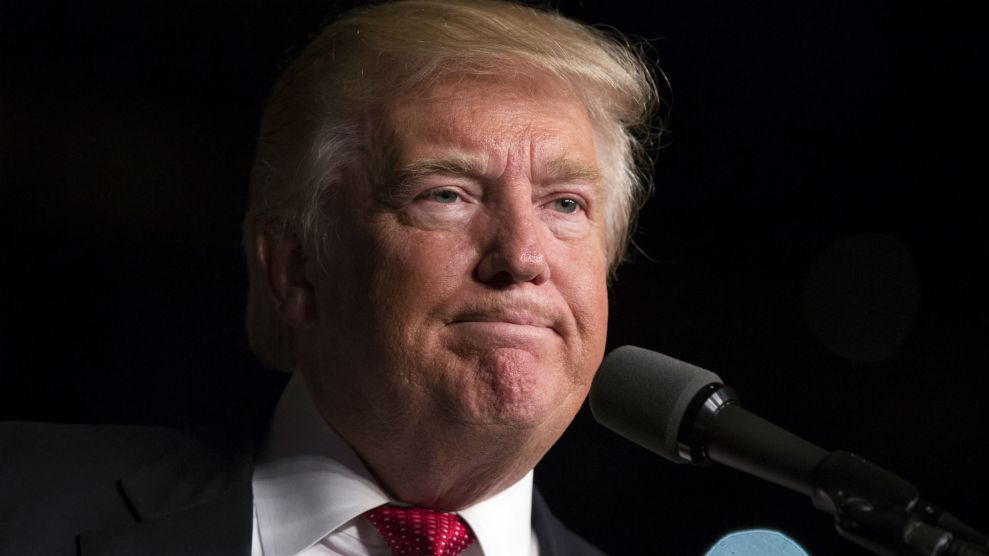 Donald Trump claimed on Monday that the terrorist attacks in New York, New Jersey, and Minnesota over the weekend were caused by “extremely open immigration” and again falsely accused Hillary Clinton of supporting open borders.

“These attacks and many others were made possible because of our extremely open immigration system, which fails to properly vet and screen the individuals or families coming into our country,” Trump said at a rally in Fort Myers, Florida. “We have seen how failures to screen who is entering the United States puts all of our citizens…in danger.”

The GOP nominee has long supported cutting off Muslim immigration into the United States and ending the Syrian refugee program until “extreme vetting” can be put in place, and he renewed those calls during Monday’s rally. He has not yet explained how this proposed system would be an improvement over the current vetting process for Syrians, which immigration officials call the toughest and lengthiest immigration screening currently carried out by the US government.

Trump also seemed to suggest that Ahmad Khan Rahami, who planted the bombs in New York and Seaside, New Jersey, on Saturday, should face trial as a “foreign enemy combatant,” despite the fact that Rahami is an American citizen who was captured on US soil. Rahami was apprehended on Monday after a firefight with police in Linden, New Jersey. Trump complained extensively about the treatment Rahami will supposedly receive while in custody.

“We will give him amazing hospitalization. He will be taken care of by some of the best doctors in the world…And on top of all of that, he will be represented by an outstanding lawyer,” Trump said. “What a sad situation.”

Trump attacked Clinton as weak on immigration and terrorism, saying the Democratic nominee “has the most open borders policy of anyone ever to seek the presidency.” He also falsely claimed that ISIS prefers that Clinton win the election. “They want her so badly to be your president, you have no idea,” Trump said. In fact, Trump’s comments have been included in an ISIS propaganda video in the past, and ISIS fans on the chat app Telegram have cheered Trump’s candidacy. “I ask Allah to deliver America to Trump,” said an ISIS spokesman on the app in August.

The speech followed a day in which Trump also called President Barack Obama and Hillary Clinton “weak” and demanded more racial profiling. He claimed that police officers are “afraid” to confront potential terrorists because they might be accused of profiling. “If somebody looks like he’s got a massive bomb on his back, we won’t go up to that person,” he said on Fox and Friends on Monday morning. “Because if he looks like he comes from that part of the world, we’re not allowed to profile. Give me a break.” He even seemed to suggest a ban on all immigration, saying, “We can’t let any more people come into this country.” Later in the day, the Trump campaign issued a statement that called again for “extreme vetting” of refugees and keeping the number of Syrian refugees in the United States at their current low levels.

Trump also bragged during the Fox and Friends interview that he had described the explosion in New York as a bombing on Saturday night, when he told the crowd at a rally in Colorado that a bomb had gone off in Manhattan before police had confirmed what the explosion was. “I should be a newscaster because I called it before the news,” he said.

Clinton in turn attacked Trump for playing into the clash-of-civilizations rhetoric used by ISIS and other terrorist groups. “We know that a lot of the rhetoric we’ve heard from Donald Trump has been seized on by terrorists, in particular ISIS, because they are looking to make this into a war against Islam rather than a war against jihadists,” she said to reporters in White Plains, New York.