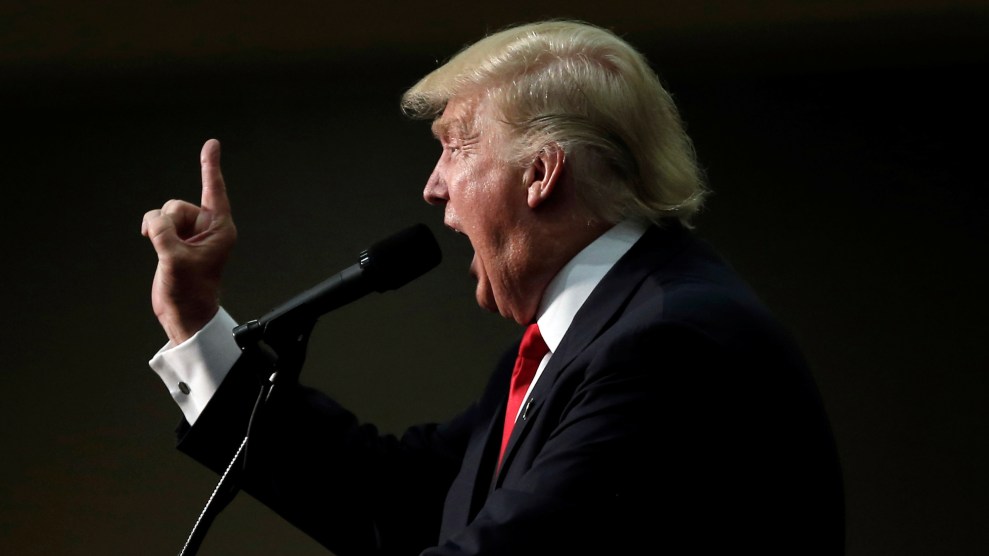 After years of leading the birther movement and claiming there was evidence that President Barack Obama was not born in the United States, Donald Trump said on Friday morning that the president was indeed a native-born American. He did not elaborate. He did not apologize. He did not explain his string of statements and tweets promoting the conspiracy theory that continued through this presidential campaign. And in a three-sentence statement delivered at his new Washington, DC, hotel, Trump once more falsely claimed that Hillary Clinton had started the conspiracy theory that Obama was born in Kenya. He also falsely stated that it was he who had ended the birther conspiracy.

“Her campaign of 2008 started the birther controversy,” Trump said at the end of a long press conference at the Trump International Hotel. “I finished it. President Barack Obama was born in the United States. Period. Now we all want to get back to making America strong and great again.” Trump then walked off the stage without further comment.

Trump’s announcement marked the first time he has ever said Obama was born in the United States. It was an attempt to distance himself from his years of high-profile advocacy for birtherism, the right-wing conspiracy theory that has denied that Obama’s birth certificates are real. Trump claimed that he “finished” the issue in 2011 when Obama released his long-form birth certification, but that isn’t true. In fact, he has repeatedly questioned Obama’s birthplace in the years since, including during the 2016 campaign.

Although the event was billed as a “major announcement,” it served mostly as a platform for a long series of veterans, including Medal of Honor winners who recently endorsed Trump, to speak on the GOP nominee’s behalf—and a chance for Trump to promote his new hotel, which opened this week. (One of the speakers, retired Air Force Lt. Gen. Thomas McInerney, has said he does not believe Obama was born in the United States.)

Trump’s birther history became a major issue again on Thursday after Trump declined to answer a question from the Washington Post about whether he still believed Obama was not a US citizen. “I’ll answer that question at the right time,” Trump told the Post. “I just don’t want to answer it yet.” On Friday morning, he plainly told Fox Business Channel that he was dragging the issue out because of the press it generated. “We will have a big statement, and I hope you’re going to be watching,” he said. “We have to keep the suspense going, okay?”

Campaign spokesman Jason Miller issued a statement later on Thursday saying that “Mr. Trump believes that President Obama was born in the United States.?” But the statement also contained several falsehoods that downplayed Trump’s role in the birther movement and made the inaccurate claim that Clinton started the conspiracy theory during her 2008 presidential bid. Trump repeated that lie on Friday morning during the Fox Business Channel interview, saying “[Clinton] is the one that started it, and she was unable or incapable of finishing it.”

Clinton attacked Trump’s statement during her own speech on Friday morning, saying that Trump can’t distance himself from birtherism. “His campaign was founded on this outrageous lie,” she told the Black Women’s Agenda Symposium in Washington, DC. “There is no erasing it in history.” Clinton upped the ante on Trump by demanding that he apologize to Obama and the American people, and she also mocked Trump’s relative restraint in recent weeks. “There is no new Donald Trump,” she said. “There never will be.”

Obama also sarcastically shot back at Trump on Friday morning when reporters in the Oval Office asked for his reactions to Trump’s birtherism. “I’m shocked that a question like that would come up at a time when we’ve got so many things to do,” Obama said. Then he smiled and joked, “Well, I’m not that shocked, actually. It’s really typical…I was pretty confident about where I was born. I think most people were as well, and my hope would be that the presidential election reflects more serious issues than that.”