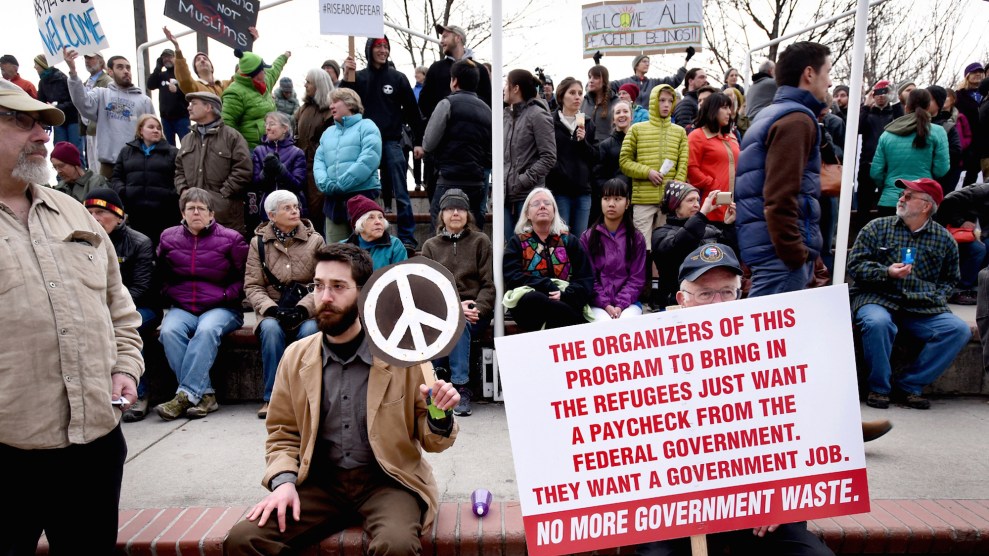 After terrorists killed 129 people in Paris last November, a group of 30 mostly Republican governors reacted by demanding that the State Department stop resettling Syrian refugees in their states. ISIS and other terrorist groups, they charged, could sneak their fighters into the United States by claiming they were refugees. Now those fears are resurfacing in Montana, where refugees began resettling in the city of Missoula last month.

The prospect of bringing refugees to Missoula had stirred controversy in western Montana for months, and the issue is now a flashpoint in the governor’s race as well. Greg Gianforte, the Republican candidate for governor, recently sent out mailers that featured a large photo of a terrorist holding a Kalashnikov rifle. “Governor Bullock supports bringing Syrian refugees into Montana,” reads the text next to the photo. The mailer promised that Gianforte would “stand up to dangerous refugee programs” and refuse entry to “unvetted refugees.”

Aaron Flint, the communications director for the Gianforte campaign, says that voters frequently raise concerns about refugees with the candidate. “This issue comes up everywhere he goes, in every single corner of Montana,” Flint told Mother Jones. “I think there is genuine grassroots concern.”

While Missoula’s mayor and other city and county officials backed the effort to bring refugees to the city, residents of neighboring rural counties were furious, saying that Syrian refugees would be a security risk. Resettlement opponents held demonstrations in Missoula in February and March and railed against Syrian refugees during meetings held to discuss the plan. “They want to destroy us,” said one speaker during a meeting in Kalispell, Montana, in March, according to the Missoulian newspaper. “This is no longer about politics, it’s about good and evil.” Republican Ryan Zinke, Montana’s lone congressman, was also a prominent supporter of congressional efforts to halt the acceptance of Syrian refugees following the Paris attacks.

Flint argues that Montanans oppose refugees as an “extension of the concerns over national security and terrorism and the failed leadership in Washington, DC.” But David Parker, a political science professor at Montana State University, says that much of the issue is about the same “rural resentment, rural consciousness, rural anxieties” that fueled Donald Trump’s landslide victory in the Montana Republican primary. “It’s one piece of that meta argument: you are left behind, you’re not being responded to, and that’s the same language that Trump’s talking about,” Parker says.

Parker believes the refugee issue also taps into Montanans’ fears that outsiders are coming to Montana and changing the state’s culture. “Montanans are suspicious of people not from Montana, and that’s not just Syrian refugees,” he says. “And that could be Californians, for crying out loud.” Still, anti-Muslim sentiment has played a clear role in the opposition to refugees. Protestors have carried signs specifically demanding “no Muslim refugees,” and local Muslims say they’re feeling a backlash. “I am starting to feel threatened. And I’ve never felt threatened,” Samir Bitar, a Palestinian immigrant and decades-long Missoula resident, told local TV station KPAX in March.

Flint wouldn’t say if the Gianforte campaign plans to push the refugee issue as Election Day draws closer, but Parker expects to hear more about it. “I think the mailer’s a start,” he says. “I think there’s a good likelihood it’ll show up in an attack ad at some point.” The Bullock campaign did not respond to emails and calls for comment.

Despite the furor, the first new refugees who arrived in Missoula on August 22 weren’t Syrian at all. They were a family of six from the Democratic Republic of the Congo. And Molly Short Carr, the head of the International Rescue Committee’s field office in Missoula, says her office expects that the 25 or so refugees they expect to arrive by the end of September are also likely to come from east Africa.