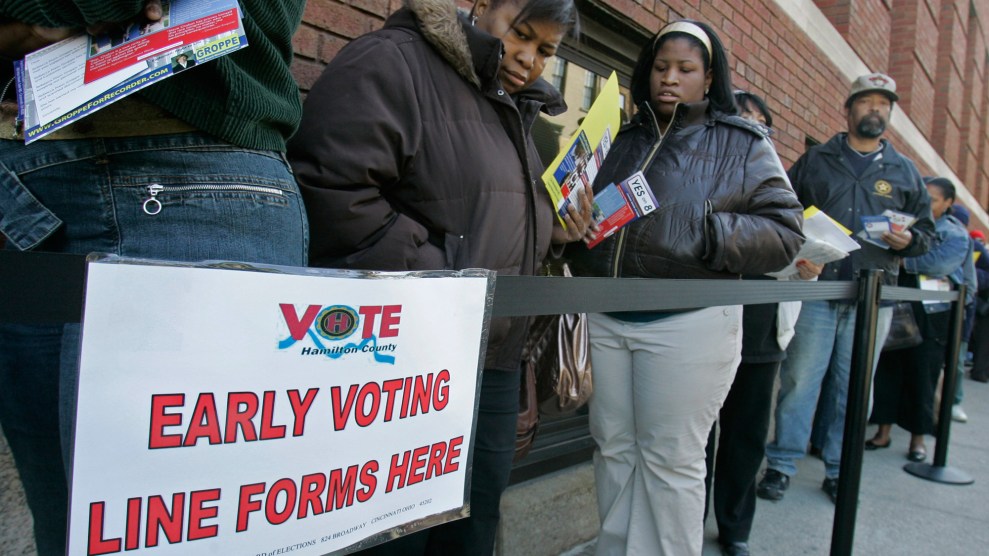 Voters line up outside the Hamilton County Board of Elections for early voting in Cincinnati in 2008. Al Behrman/AP

Ohio’s Golden Week—a period when voters can register and cast ballots early at the same time—will not be in place for the November election. The US Supreme Court on Tuesday unanimously affirmed an appeals court panel decision and stonewalled a last-ditch effort by Ohio Democrats to restore the extra week during the state’s early voting period.

The saga began in February 2014, after the state’s Republican-led Legislature passed a series of voting restrictions that included eliminating Golden Week and same-day voter registration. The Ohio branch of the NAACP filed a lawsuit in May 2014, alleging the changes disproportionately affected minority voters. That September, a federal district judge granted an injunction halting the state’s early voting restrictions. The state appealed, and a panel on the 6th Circuit Court of Appeals upheld the district court’s decision. But later that month, the Supreme Court put the order on hold, which kept the state’s initial restrictions in place for the midterm election.

After the election, the state’s NAACP reached a settlement with Ohio Secretary of State Jon Husted that resulted in additional evening hours and another Sunday added to the early voting period, but the settlement may not have gone far enough. The Ohio Democratic Party, along with two other county Democratic organizations, later joined a lawsuit on behalf of several individuals to challenge the measures, arguing that they were discriminatory and disproportionately affected minority voters. (The Ohio Organizing Collaborative filed the initial suit in May 2015, but later withdrew.)

They claimed the rollbacks violated the 14th Amendment and Section 2 of the Voting Rights Act, which prohibits discriminatory voting practices or procedures on the basis of race, color, or language. In May, a federal district judge ruled that the reductions disproportionately burdened African American voters and resulted “in less opportunity for African Americans to participate in the political process than other voters.” But a federal appeals court panel disagreed and reversed the lower court’s ruling in August. “This case presents yet another appeal…asking the federal courts to become entangled, as overseers and micromanagers, in the minutiae of state election processes,” wrote Judge David McKeague in the majority opinion. “The undisputed factual record shows that it’s easy to vote in Ohio. Very easy, actually,” he added later. The Supreme Court today agreed.

Some experts, such as University of California-Irvine professor and election law expert Rick Hasen, still consider the state’s 29-day early voting period “exceedingly generous.” In a blog post after the 6th Circuit Court of Appeals’ decision, he wrote, “[W]hile I might support Golden Week as good policy, I worry when courts are used in this way to prevent every cutback in voting, especially after voting rights proponents had settled a suit with Ohio on favorable terms.”