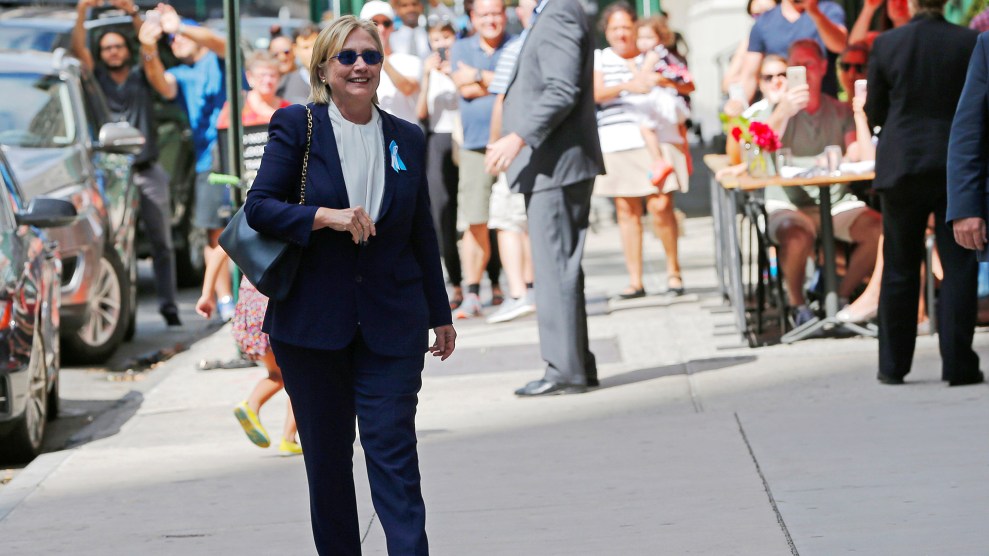 Hillary Clinton released a new note from her doctor Wednesday afternoon—the latest chapter in the ongoing uproar over the Democratic presidential candidate’s health. The diagnosis: Clinton is in good health and is “recovering well” from pneumonia.

The letter—written by Lisa Bardack, Clinton’s longtime physician and chair of internal medicine at CareMount Medical—comes three days after Clinton stumbled at a 9/11 memorial early Sunday and had to leave the event. Later on Sunday, Bardack released a statement through the campaign stating that Clinton had been diagnosed with pneumonia last week. Bardack said Clinton “became overheated and dehydrated” at the event.

Clinton “is recovering well with antibiotics and rest,” writes Dr. Lisa Bardack. “She continues to remain healthy and fit to serve as President of the United States.?”

In Wednesday’s letter, Bardack writes that outside of a few infections during the past year, Clinton is in solid health.

According to Bardack, Clinton has had “several allergy flares over the past year, which has been a typical pattern for most of her life.” Things took a slight turn for the worse in January, when Clinton developed a sinus and ear infection, requiring a visit to an ear, nose, and throat doctor. When antibiotics and steroids? didn’t initially clear things up, she had a myringotomy tube? put in her left ear to drain fluid; the procedure eased her symptoms. Clinton’s doctors performed a full CT scan of her sinuses and brain at the time of the infection, and the results showed “no abnormalities of the brain”—a finding that runs counter to the fever dreams of conservatives who think Clinton is suffering from some terrible affliction that renders her incapable of holding office.

Clinton visited Bardack in early September, with general cold systems: a cough, fatigue, low-grade fever. On Friday, September 9, Clinton underwent a chest CT scan and was diagnosed with pneumonia—a noncontagious bacterial variety, Bardack notes. But she’s taking antibiotics and is on the mend.

Beyond that, everything seems fine, according to Bardack. “My overall impression is that Mrs. Clinton has remained healthy and has not developed new medical conditions this year other than a sinus and ear infection and her recently diagnosed pneumonia,” Bardack writes. “She is recovering well with antibiotics and rest. She continues to remain healthy and fit to serve as President of the United States.?”

Perhaps the main takeaway should just be that Clinton gets her fair share of aggressive preventative treatment.

You can tell that Clinton’s new doctor’s note is real because she came in with congestion and got a $2000 chest CT. pic.twitter.com/kF9k8rQi7T