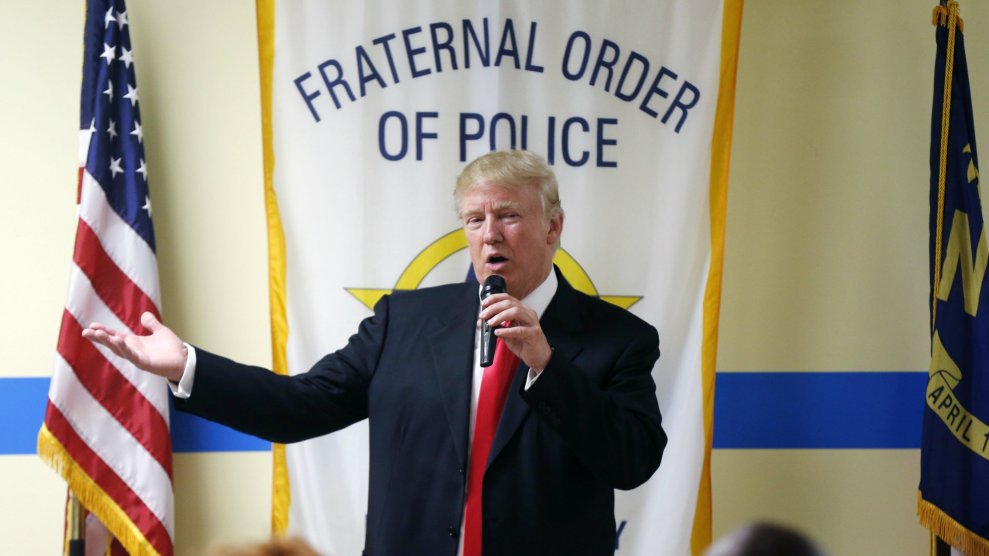 Donald Trump speaks at a FOP lodge in North Carolina in August.Gerald Herbert/AP

Anthony Miranda, executive chairman of the National Latino Peace Officers Association, seemed a little bewildered last Friday when I told him that America’s largest police union, the Fraternal Order of Police (FOP), had just given Donald Trump its official blessing.

He then went on for nearly 15 minutes about why the endorsement was a big mistake. “There’s not a need of anybody in the law enforcement community to take a side with someone that’s going to create a rift in the communities that we’re serving,” he said, noting Trump’s “antagonistic” views toward people of color.

Trump’s rhetoric, Miranda said, has been unhelpful to departments seeking to mend fraught relationships with communities of color.

Trump, who has been heartily embraced by white supremacists and neo-Nazis, has famously called Mexican immigrants “rapists” and “criminals,” and vowed to bar foreign Muslims from entering the United States. He has posted anti-Semitic memes on Twitter, as well as memes citing false statistics about crimes committed by black Americans against whites. In a taped interview that aired on Fox News on Wednesday, he proposed a nationwide stop-and-frisk policy to address crime in black communities. None of these things is helpful to law enforcement at a time when departments are trying to mend fraught relationships with communities of color, Miranda said.

Those relationships have been strained further by three contested police shootings of black citizens in a week. First a teen with a BB gun was shot in Columbus, Ohio. Soon after, videos of Tulsa, Oklahoma, police killing Terrence Crutcher, an unarmed 41-year-old who didn’t appear to be resisting, garnered national attention. On Wednesday, a protester was shot (by a civilian, authorities say) during a second night of unrest in Charlotte, North Carolina, after police killed Keith Scott, a 43-year-old black man. And dozens of NFL players (not to mention college and high school athletes) have followed the lead of 49ers QB Colin Kaepernick, kneeling during the national anthem to protest what they view as police victimization of people of color. (At least two local police unions said their members will stop working security at NFL games if the athletes persist in their activism.)

Miranda, a former NYPD sergeant, pointed out that the FOP only represents its 330,000 members—active and retired cops—but certainly not all local police departments. The FOP should make that crystal clear, he added, “so no one else has to bear the wrath of their stupidity.” (The most recent FBI data, from 2008, put the number of sworn officers employed by local police agencies at around 765,000.)

According to an FOP press release, “Mr. Trump has seriously looked at the issues facing law enforcement today…He understands and supports our priorities and our members believe he will make America safe again.” In explaining the group’s decision, FOP officials noted that Hillary Clinton did not seek an endorsement, while Trump had met with members to discuss their concerns. In the 2012 race, the group declined to back either Barack Obama or Mitt Romney.

Several of Trump’s most ardent police supporters have fraught histories with communities of color. Milwaukee Sheriff David Clarke Jr., who endorsed Trump at the Republican National Convention in July, declared that “Black Lives Matter is the enemy” following the shootings of police officers in Dallas and Baton Rouge. Another Trump backer, Arizona sheriff Joe Arpaio, unapologetically backs the racial profiling of Latinos—because some may be in the country illegally.

“We have worked with both of the campaigns to suggest that the crime data is not as gloom and doom as some might believe.”

Adeel Rana, president of the NYPD’s Muslim Officers Society, America’s largest organization of Muslim cops, also criticized Trump and his endorsement by the FOP. He was particularly irked, he told me, by Trump’s targeting of entire groups of people. “It’s against the Constitution. It’s against the rules and regulations of this country,” he said. “We’re here to protect every race and religion.”

While Trump has expressed support for law enforcement, Rana said, the candidate has “demonized” groups—including Muslims and Mexican Americans—whom police are sworn to protect. The NYPD has more than 800 Muslim officers, but Rana said he didn’t know of any who were supporting Trump.

It’s unclear how many of the FOP’s minority members—about 30 percent of the membership, according to the group’s executive director James Pasco—support the Trump endorsement. But Miranda noted that the nation’s racial divide extends to the police as well. (Several black law enforcement organizations, the National Asian Peace Officers Association, and the National Native American Law Enforcement Association did not respond to my interview requests. So far, these groups have taken no public stand on the FOP’s endorsement.)

Ronald Serpas, the former New Orleans police chief and chairman of the group Law Enforcement Leaders to Reduce Crime and Incarceration, wouldn’t disclose whom he favors for president. He did, however, say he hadn’t heard “very specific policies” from the Trump campaign on criminal justice reform—a topic of interest to countless legislators and activists. And Trump’s specter of rising crime in America is inaccurate, he noted: “We have cautioned and worked with both of the campaigns to suggest that the crime data is not as gloom and doom as some might believe.”

Serpas, who is white, also criticized Trump’s penchant for singling out entire groups. “Police officers cannot, even ethically, paint with such broad brushes. Police officers should never do that,” he said. “It’s inconsistent with the professional practices.”

To the claim that his organization’s endorsement of Trump could hurt police relations with communities of color, Pasco responded in an email that the FOP’s endorsement “reflects the opinion of the majority of our members,” but that the group respects the views of members or citizens who disagree.