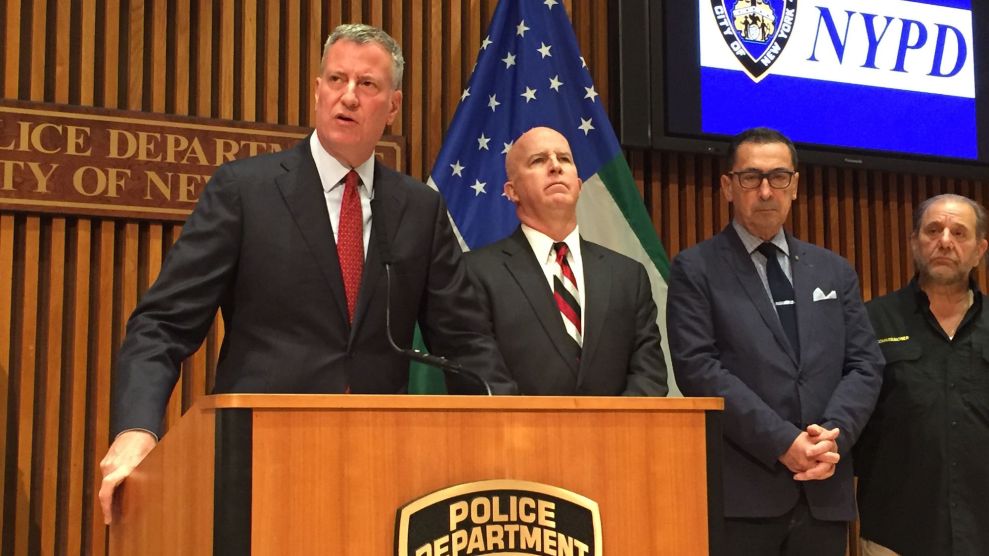 Update, September 19, 1:42 p.m.: During a news conference with New York City and federal officials, William Sweeney, the assistant director in charge of the FBI’s New York division, said there was “no indication that there’s a [terrorist] cell operating” in the New York area and had no information about Ahmad Khan Rahami’s “path to radicalization.” Sweeney and other officials said the investigation into potential links to ISIS or other terror groups was still ongoing. Sweeney also noted that no one was arrested after the FBI’s Joint Terrorism Task Force stopped a car in Brooklyn that was “observed…at a location associated with Rahmani” on Sunday night.

Update, September 19, 1:27 p.m.: Chris Bollwage, the mayor of Elizabeth, New Jersey, said in a news conference that Ahmad Khan Rahmani had not been known to local police as a potential terrorist before this weekend’s bombing. Rep. Peter King (R-N.Y.) also told CNN he did not believe Rahami had been on any terrorist watch list.

On Sunday evening, a backpack containing five pipe bombs was discovered in Elizabeth, New Jersey, near the tracks of the New Jersey Transit railroad. One of the bombs detonated early on Monday morning as police attempted to disarm it. It was the latest in a series of bombs discovered in the New York City region since Saturday, including a pressure cooker bomb that exploded in Manhattan’s Chelsea neighborhood on Saturday night, injuring 29 people. Here’s what we know so far:

How the bombings unfolded. The first bombing took place in Seaside Park, New Jersey, on Saturday morning, when a pipe bomb exploded near the starting line of the “Semper Five” 5K race supporting the Marine Corps. On Saturday night, a pressure cooker device exploded on 23rd Street in Manhattan’s Chelsea neighborhood, injuring 29 people. Police also discovered and removed a second bomb a few blocks away on 27th Street. Then, on Sunday night, two men reported finding a backpack with five pipe bombs in Elizabeth. Police attempted to disarm the devices using a bomb disposal robot but accidentally detonated one of the bombs. No one was injured in the explosion.

Police have captured the main suspect in the case. Police announced on Monday morning that they were seeking 28-year-old Ahmad Khan Rahami, an Afghan-born American citizen. Rahmani was caught on surveillance video near the site of the explosion in Manhattan on Saturday and has also been linked to the bombing in Seaside Park.

Rahami was captured on Monday morning in Linden, New Jersey, following a shootout with police in which two officers were injured and Rahami was reportedly shot in the leg.

Quite a photo of NYC bombing suspect in custody via @JBN pic.twitter.com/t5B4UBYAst

The FBI also detained five Afghan men in a car on New York’s Belt Parkway on Sunday night, according to media reports. The FBI has confirmed that it carried out a traffic stop, but did not confirm how many people it detained.

Police haven’t yet linked all the bombings together. While Rahami has been linked to the bombs in Manhattan and Seaside Park, authorities have not yet connected those bombings to the pipe bombs discovered in Elizabeth, according to the Washington Post. One of the devices exploded early on Monday morning while a police bomb-disposal robot was attempting to disarm it. No one was injured in the blast.

There’s still no direct connection to ISIS or other terrorist groups. After one of the devices exploded and injured 29 people in Manhattan’s Chelsea neighborhood on Saturday, New York Gov. Andrew Cuomo and New York City Mayor Bill DeBlasio said there was no indication that the bombing—along with the one in Seaside Park—was the work of ISIS or another terrorist group. But Cuomo said on Monday that he’s rethinking that assessment. “The evidence might suggest a foreign connection,” he said, according to Reuters.

But ISIS has not yet claimed that it inspired the attackers, as it often does in the hours after terrorist attacks in the West. The group quickly took credit on Saturday for inspiring that evening’s stabbing attack at a mall in St. Cloud, Minnesota, calling the perpetrator a “soldier” of ISIS.