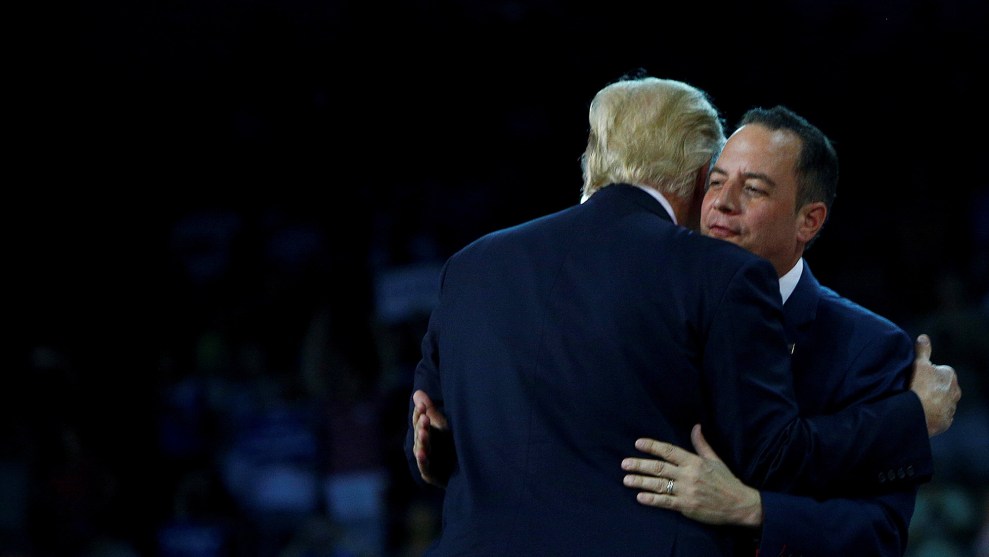 For five years, Trump has pushed the discredited theory that President Barack Obama was not born in the United States. Even after the White House released Obama’s birth certificate in 2011, Trump continued to fan the flames of this conspiracy. He refused to admit that he was wrong until last Friday, when his role in the birther movement became an issue in the presidential election. Then, rather than admit he was wrong, Trump falsely blamed Hillary Clinton for starting the rumor that Obama was not born in the United States and said he had done a service to the country by forcing Obama to release his birth certificate, resolving the question of Obama’s citizenship (which, of course, was never actually in question).

On Sunday, the chairman of the Republican National Committee, Reince Priebus, approved this account of the birther movement and Trump’s role in it. “It was an issue that he was interested in,” Priebus said in an interview on CBS’ Face the Nation. “It was an issue that I believe and I think the preponderance of the evidence shows Hillary Clinton started it. And after getting this issue resolved, he proclaimed on Friday that he believes that the president was born in America, just like I have as chairman of the Republican Party.”

By agreeing with Trump’s “she started it; I finished it” narrative, Priebus implicitly signed off on the idea that Trump’s actions—even after 2011, when he continued to question the legitimacy of Obama’s birth certificate—were legitimate. Since birtherism became an obsession of the right wing, Republicans have often shied away from challenging the theory because it helped energize the party’s base. But Trump put Republicans on the spot, and on Sunday, Priebus, the official face of the party, sided with Trump.

Priebus also made clear that he expects Republicans who have thus far refused to endorse Trump to fall in line. In the same interview, Priebus said that the party could take actions to punish or ostracize Republicans who ran for president this cycle and pledged during the primary to support the party’s eventual nominee but then did not honor that pledge. “Those people need to get on board,” Preibus said, referring to candidates such as John Kasich and Ted Cruz, who have thus far refused to endorse Trump. “And if they’re thinking they’re going to run again someday, you know, I think that we’re going to evaluate the process of the nomination process, and I don’t think it’s going to be that easy for them.”

“Would the party itself penalize somebody who does not make good on the pledge that they made to support the party’s nominee?” host John Dickerson followed up. Priebus didn’t rule it out. “I think these are things that our party’s going to look at in the process,” he said. “And I think that people who gave us their word, used information from the RNC, should be on board.”

Back in February, the Wall Street Journal‘s Bret Stephens worried that a Trump nomination would legitimize the accusations by liberals that the GOP has turned a blind eye to racism—or worse, capitalized on it—for political gain. “It would be terrible to think that the left was right about the right all these years,” he wrote. “Nativist bigotries must not be allowed to become the animating spirit of the Republican Party. If Donald Trump becomes the candidate, he will not win the presidency, but he will help vindicate the left’s ugly indictment. It will be left to decent conservatives to pick up the pieces—and what’s left of the party.”

But now Trump is surging in the polls and threatening to prove Stephens wrong about the election. And with the party establishment lining up not only behind his candidacy but behind his debunked conspiracy narratives, Trump’s takeover of the party appears to be complete.