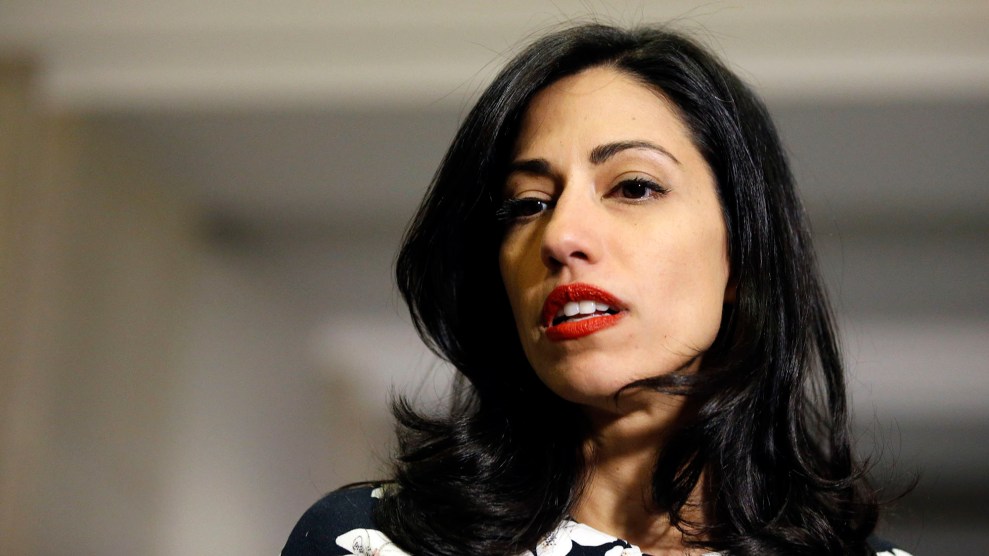 Stephen Bannon, the executive chairman of Breitbart News whom Donald Trump has appointed as his new campaign CEO, hasn’t been shy about trading in on the deepest fringes of conspiracy theories against Hillary Clinton and her campaign staff. Just a month before taking the helm of Trump’s campaign, Bannon used his Sirius XM radio show to question whether one of Clinton’s closest aides is tied to Muslim terrorists.

On July 5, Bannon invited Trump pal Roger Stone onto his daily radio show, Breitbart News Daily, to talk about Huma Abedin, a longtime Clinton aide and vice chair of her 2016 campaign. Abedin has long been at the center of discredited, racist conspiracy theories thanks to her Muslim heritage, and Bannon and Stone happily treaded into those waters during the July interview. “You’ve got more breaking news on Huma Abedin,” Bannon kicked off. “By the way, Roger, I still can’t figure out how she got the security clearance. Can you help me out here?”

“It’s very, very hard to understand because of her ties to the Muslim World League.” Stone replied. “And the league’s ties to extremism and to terrorism, to an organization, a trust, which funded the actual attack on America on 9/11 are inexorable. This is a fact; this isn’t fiction. And Hillary continues to dodge all of these questions.”

The fringes of conservatism have spent years questioning Abedin based on little more than her ethnicity. In 2012, former Rep. Michele Bachmann, a Minnesota Republican, sent a letter to the State Department requesting an investigation into Abedin’s supposed ties to the Muslim Brotherhood. Her letter was widely condemned, even by fellow Republican John McCain and the conservative Daily Caller.

Abedin’s background has been a favorite topic of Stone’s. A month earlier, also on Bannon’s XM show, Stone said, “Most of the experts I look at, I’ve spoken to, looking at the various facts regarding Huma and her rise, where she came from, her family background, her various connections, conclude that she is most likely a Saudi spy, which is my own conclusion.”

Listen to the interview below: