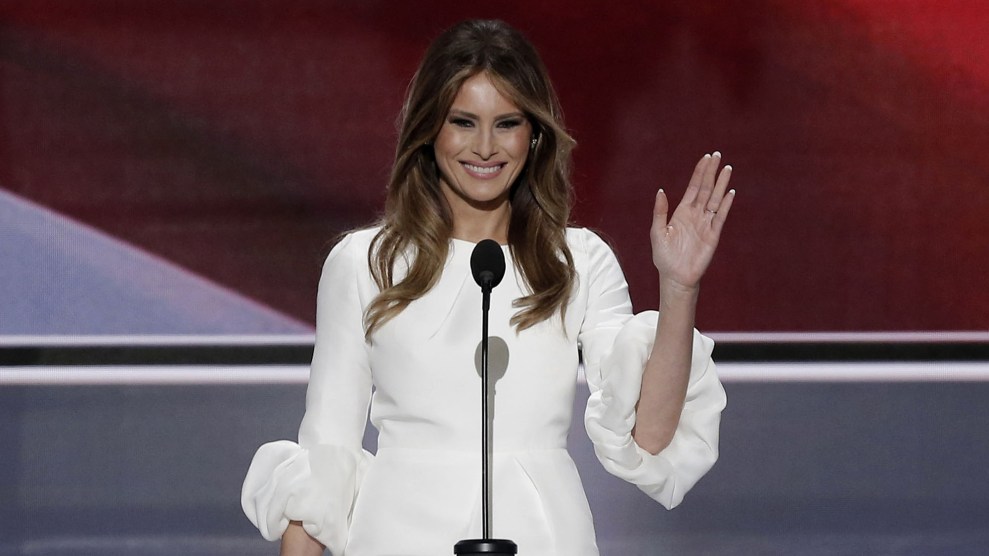 Could Donald Trump—a man who has predicated his entire presidential campaign on attacking the evils of illegal immigration—be married to an immigrant who entered the country under false pretenses and violated US laws?

On Thursday, Politico detonated a new controversy for Trump, with an article that reported various inconsistencies in Melania Trump’s account of how she came from Slovenia to live and work in United States in the mid-1990s. As Politico pointed out, a recent New York Post story on a nude photo shoot from Melania’s early modeling days noted that she was living and working in the United States in 1995, when the photo session took place. This contradicts her claim that she moved to the country in 1996.

More important, the Politico story reports, during various interviews Melania Trump has said that she followed immigration rules and that after her arrival in the United States, she returned home “every few months” to renew her visa. But here’s the rub, according to Politico: “Trump’s description of her periodic renewals in Europe are more consistent with someone traveling on a B-1 Temporary Business Visitor or B-2 Tourist Visa, which typically last only up to six months and do not permit employment.” Trump was indeed doing paid gigs as a model at that time. This suggests that she may have been violating her immigration status and working illegally in the United States. (And, as Politico reported, if she did violate her visa, then her subsequent green card and citizenship could be in jeopardy.)

Melania took to Twitter Thursday to deny she had done anything wrong, but she didn’t offer any specific refutations. There’s one simple thing that she could do to clear up this matter: release copies of her visa records. Even if she doesn’t have them lying around at home, she can request those records from the US government and then make them public. These documents presumably would indicate whether she had been working legally in the United States.

Donald Trump spokeswoman Hope Hicks didn’t immediately respond to a request for comment regarding whether Melania would seek and release her visa records.

Donald Trump has never been shy about requesting that others release important documents. As a leading birther, he demanded that President Barack Obama make public his long-form birth certificate. He whipped up enough of a fervor that Obama eventually did release the document. In 2012, Trump also offered $5 million if Obama would release his college transcripts.

But Trump has been less than forthcoming when it comes to his records. He has, for instance, refused to make public his tax returns. And now there’s another item to add to the list.