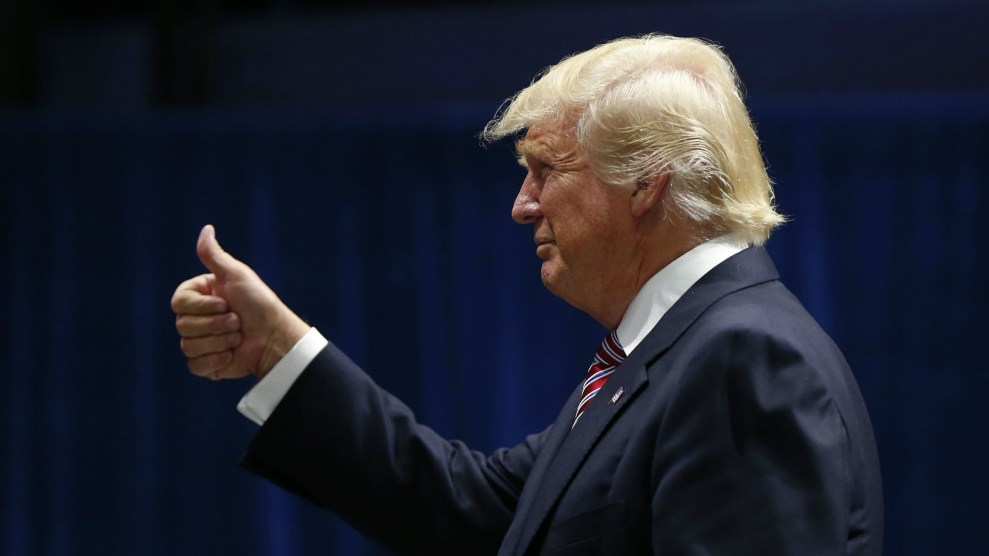 Donald Trump didn’t spend a cent on television ads until last week, and he paid the woman who wrote his wife’s convention speech an oddly small fee, but one campaign expense he couldn’t seem to control last month was his legal bills.

In July alone, the Trump campaign’s latest campaign finance filings show, it spent more than $762,000 on legal fees—more than it spent on anything else but travel, merchandise, and his fundraising efforts. By comparison, Hillary Clinton’s campaign spent $105,000 on legal expenses in July.

The Trump campaign did not respond to a request for comment on why Trump is spending so much on lawyers. Most of the money is being paid to the Washington, DC, powerhouse firm Jones Day, where the campaign’s top lawyer, Don McGahn, a former member of the Federal Election Commission, is a partner.

The Trump campaign has had only a handful of legal issues—that are publicly known, at least—but it seems unlikely that they would have generated such large legal fees. One that did break in July was a brief squabble with former Trump aide Sam Nunberg, whom the campaign sued for $10 million in early July. The campaign alleged that Nunberg had violated a nondisclosure agreement he signed when he was hired, accusing him of orchestrating a leak of details of internal campaign strife. The dispute was settled earlier this month.

According to the filings the campaign made, it paid just over $78,000 to two lawyers and an arbitration company in New York City, where the Nunberg lawsuit was filed. But Trump has other ties to those law firms. One firm, Kasowitz, Benson, Torress & Friedman, which the campaign paid $69,000 in July, has long represented Trump’s real estate interests and handled a defamation suit Trump filed in 2005 against a journalist who questioned his wealth. (The journalist won.) In April, a partner at the firm, David Friedman, was named an “Israel advisor” to the Trump campaign. The other New York firm, Belkin Burden Wenig & Goldman, which was paid almost $2,400, has represented Trump’s company in its ongoing litigation involving Trump University.

Locke Lord LLP, a Chicago law firm, received $26,000 from the campaign. It’s a large international firm, but according to the website of the Center for Responsive Politics, which tracks campaign finance data, Locke Lord hasn’t been hired by any other political campaigns this election.

Whatever the reason for the campaign’s lavish on lawyers, the flurry of legal bills is striking in the context of Trump’s overall spending when compared with other recent campaigns. The Trump campaign has spent a total of $89.5 million. Of that, $1.1 million has gone toward legal fees. That’s how much the Mitt Romney presidential campaign spent on legal fees over the course of the entire 2012 election, while spending $483 million overall on Romney’s losing bid.

While the Clinton campaign has still spent more than the Trump effort on lawyers this election—$1.4 million in total—it has also been up and running for five months longer. Trump’s $1.1 million spent on lawyers is just $300,000 shy of Clinton’s. And as Trump himself has gleefully pointed out, the Clinton campaign has faced more than its share of legal issues. Maybe Trump can explain whether he’s got legal issues of his own that have caused the bills to pile up.