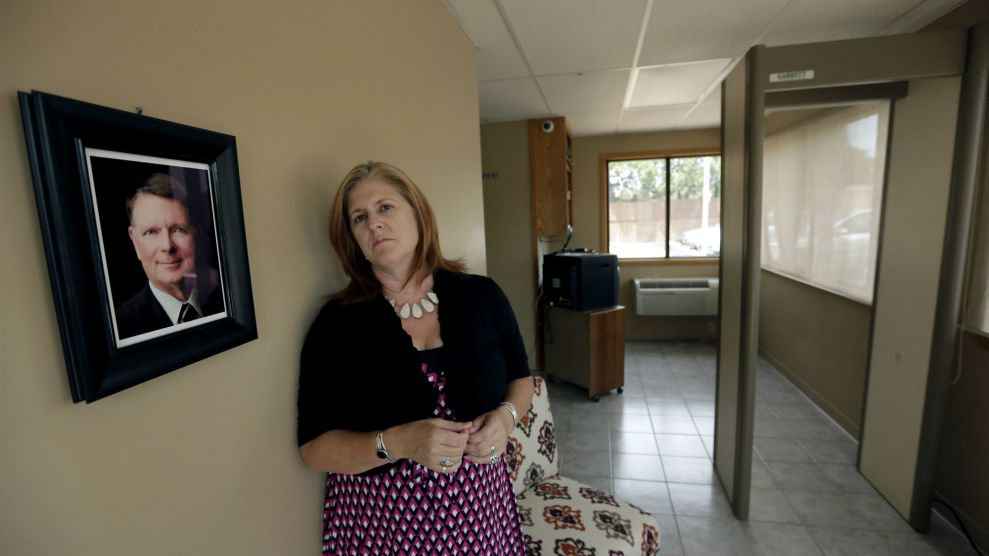 Julie Burkhart wondered if her impression of Catholic nuns as quiet, meek, shy women was all wrong.

Burkhart is opening an abortion clinic in Oklahoma City, and it’s located in the same neighborhood as St. James the Greater Catholic Church. A few months ago, members of the church began holding lunchtime protests at the construction site, and one bold nun entered the clinic to harass construction workers. Then the nun demanded a meeting with Burkhart.

“I went out and I told her, ‘Well, you’re never to walk onto this property unless you’re invited, and I don’t think we really have a lot to talk about,'” Burkhart said firmly.

Angry nuns aren’t the only problem that the clinic operator has had to contend with when trying to open the first new abortion clinic in Oklahoma since 1974. It’s been a time-consuming, costly enterprise in a state that has, Burkhart notes, a number of “prohibitive anti-choice laws.” Gov. Mary Fallin has signed 20 anti-abortion bills over the course of her six-year tenure, including measures that tripled the waiting period from 24 to 72 hours and banned the use of telemedicine to administer medication abortion. Although this year she vetoed one that would have made it a felony to provide abortions except in cases of miscarriage or when a woman’s life is in danger, she did so because the language in the legislation was “vague.” (Removing fetal matter after a miscarriage does not medically qualify as abortion, despite the legislation’s definition of it as such.) Legal experts contend the bill could not have survived a constitutional challenge anyway.

Burkhart’s clinic, Trust Women South Wind Women’s Center Oklahoma City, will be the only one in the state’s largest city. Since late 2014, women in Oklahoma seeking an abortion have had only two options—in Norman and Tulsa—130 miles apart. Her clinic will provide general reproductive health care—birth control, pap smears, pregnancy care, transgender care—along with abortion services for up to 21.6 weeks. When we spoke, she was getting ready to receive the final sign-off from the state regulators before the clinic opens its doors in August.

“Just because we happen to live in a more traditional, conventional, conservative part of the country, it doesn’t mean that people don’t need reproductive health care,” Burkhart says. “I think sometimes that gets lost because of the political attitudes here, but abortion is equal opportunity, whether you’re conservative or liberal or a Democrat or a Republican or whatever.”

“Just because we happen to live in a more traditional, conventional, conservative part of the country, it doesn’t mean that people don’t need reproductive health care.”

The four-decade lull between the last opening of a new clinic in Oklahoma is representative of a broader trend: Clinics are opening at a much slower rate in recent years, due to mounting costly restrictions. According to an investigation by Bloomberg, at least 162 abortion providers have closed since 2011 and only 21 new clinics have opened, three-quarters of them by Planned Parenthood rather than private operators like Burkhart.

Oklahoma has been challenging, but Burkhart is no newcomer to the struggle for abortion rights. An activist for reproductive justice and a political consultant in Washington state, she moved to Wichita, Kansas, in 2002 and became chair of the Wichita Choice Alliance, an abortion rights group. There she began working with Dr. George Tiller, an abortion provider who also performed late-term abortions and was the target of violence by anti-abortion extremists for years. His clinic was bombed in 1986, and he survived being shot in both arms by anti-abortion activist Shelley Shannon in 1993.

Burkhart considers Tiller her “mentor” and remembers him as an encouraging, “solutions-oriented” man. She was the spokeswoman for his clinic in 2009, when the physician was murdered in the foyer of his Lutheran church while he handed out bulletins for the Sunday service. He was shot in the head by Scott Roeder, an anti-abortion activist with ties to Operation Rescue, an extremist anti-abortion group with headquarters in Kansas that had long protested Tiller’s clinic.

A few weeks after his death, Burkhart told the Oklahoman, she sat in his living room and told his widow, “We have to reestablish services.”

It took four years and the creation of a reproductive rights organization—Trust Women, an advocacy group that also provides women’s health care in underserved areas—but in 2013, Burkhart opened a new clinic in Wichita, in the same space where Tiller had practiced. The following year, she set her sights on Oklahoma, and from the very beginning she faced challenges.

First was the question of financing. In 2014, she began her yearlong search for a bank that would give Trust Women a mortgage and a small line of credit to begin construction on the property she had chosen. After being turned down by banks for nearly a year, she started to fear they would have to pay cash for everything. Eventually, she found a bank and was able to move forward.

She also ran into trouble with the state Department of Health when she submitted Trust Women’s application for a license, including the blueprints of her plans to outfit the clinic in compliance with the state’s health code, which, she says, are “one step down” from an ambulatory surgical center. In June, the Supreme Court decreed that requiring clinics to be outfitted as ambulatory surgical centers constitutes undue burden, but for now at least, Oklahoma’s state regulations are still in place. “We have giant operating rooms, both here in Kansas and Oklahoma,” she said, noting that historically, most first- and early-second-trimester abortions have been safely performed in doctor’s offices. Nonetheless, the Department of Health “would not sign off on any of our applications, even though I submitted all the corrective actions time and again,” Burkhart said. “We really complied with everything that they had brought to our attention, so they kept saying, ‘No, no, no.’ My attitude was like, ‘No that’s not gonna work for us.'”

She summoned her attorneys, and in late 2015, they met with the state’s counsel to get “on the same page.” It’s been a much smoother relationship since. The Department of Health told Mother Jones that it could not comment on the licensing process.

Burkhart and her architect recruited a team of subcontractors to build their clinic to code. They vetted each one and made sure they understood the nature of the project and that it could involve some personal risk. They found a tan brick former eye clinic across from a 7-Eleven and down the road from St. James the Greater Catholic Church, and they began gutting it in December. Construction started in January.

In March, anti-abortion activist Alan Maricle from the Oklahoma-based group Abolish Human Abortion (AHA) began demonstrating at the clinic, harassing the workers and filming his arguments to upload to a YouTube page. Maricle even went so far as to find the churches where two of the contractors worshipped, calling the pastors at those churches to see if they were “cool with it.” Maricle said both pastors stood up for the contractors—he also visited both churches but said he left without speaking to anyone.

“One of the things that sets AHA apart from the pro-life movement as it appears in virtually every other part of the country is this growing understanding of the complicity of the church in what we think of as the Holocaust,” Maricle says. “We see the churches being silent—they’re playing political games with this matter…This kind of mentality leads to good, Christian people thinking it’s okay to build abortion mills.”

Burkhart quickly set up meetings with local law enforcement and erected a fence around the building. That didn’t deter the flood of more protesters, but construction continued.

Burkhart estimates construction costs will run up to $650,000. Add to that the cost of purchasing the building, and the final bill for the facility alone is nearly $1 million.

Burkhart estimates construction expenses—which became more costly due to state requirements—will run up to $650,000. Add to that the cost of purchasing the building, and the final bill for the facility alone is nearly $1 million. That doesn’t include what she’ll pay for staffing, equipment, and medicine. This marks a radical change from the situation before Targeted Regulation of Abortion Providers (or TRAP) laws were enacted. She calls those requirements “an added layer of bureaucracy and cost, meant to be punitive for abortion providers and either prohibit them from opening or cause them to shut down, as we’ve seen in Texas.”

Even finding an OB-GYN in Oklahoma can be a challenge, although Burkhart already has physicians lined up to work. The state suffers from a severe shortage of practicing gynecologists. The American Congress of Obstetricians and Gynecologists reported that in 2014, 48 counties out of the state’s 77 didn’t have a single OB-GYN, and there are approximately 1.87 OB-GYNs for every 10,000 women in Oklahoma, which is below the national average of 2.65 per 10,000 women.

And she’s painfully aware of the potential danger that comes with running a clinic. As opening day nears, she can’t help but think of her former boss. She remembers his encouragement, his determination, and the way he insisted on hugs after every meeting.

“I’ve really been missing him this week,” she said. “He was just such a wonderful person to work for, and…I always just felt like we were doing such good work.”