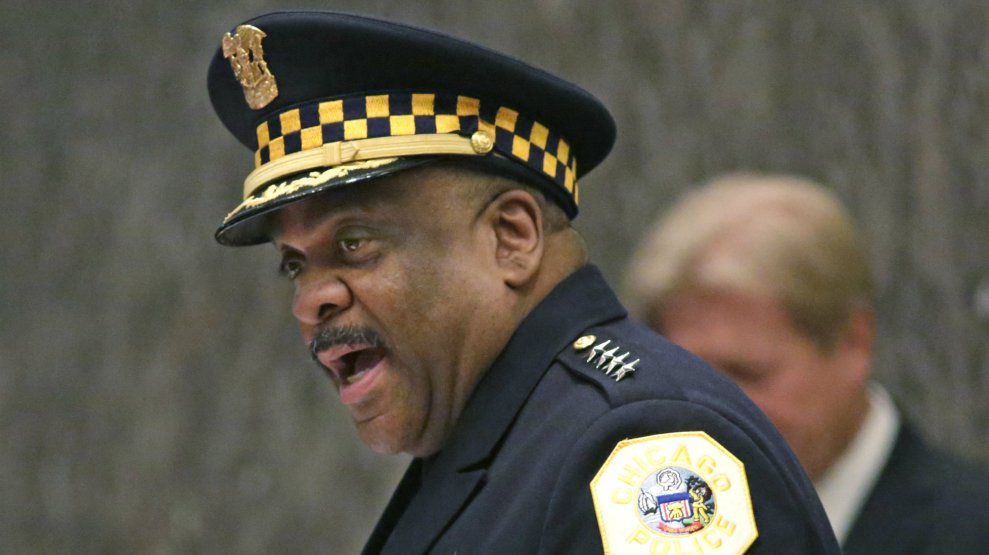 The head of the Chicago Police Department will ask the city’s police civilian review board to fire seven officers allegedly involved in covering up the fatal police shooting of black teenager Laquan McDonald back in October 2014, an incident the New York Times Editorial Board characterized as an execution.

Police Superintendent Eddie Johnson announced his decision on Thursday morning, just two days after the Chicago Inspector General’s office issued a report recommending that 10 officers involved in the alleged cover-up be fired or disciplined. Johnson stripped seven of the officers of police powers, but the review board must okay their ouster. Two more officers have already left the department: A deputy chief who signed off on a report justifying the shooting retired last week, and a lieutenant retired in May. Johnson said that he did not see sufficient evidence that the tenth officer did anything wrong.

Chief prosecutor Anita Alvarez came under attack for waiting more than a year to file charges against Officer Van Dyke.

The McDonald case came to the nation’s attention when a judge forced Chicago officials to release police footage of the incident. The footage showed Chicago officer Jason Van Dyke, who is white, shooting McDonald 16 times—several shots were fired while McDonald lay wounded on the ground. Van Dyke initially claimed the teen charged him with a knife. McDonald did have a knife, but the footage clearly shows him walking away from Van Dyke when the officer opened fire.

While the former officer was eventually charged with first-degree murder, the shooting and its bungling by city officials prompted national outrage and an investigation by the Department of Justice. A New York Times op-ed accused Mayor Rahm Emanuel of sitting on the video, which his office apparently received shortly after the shooting, because its release might have hurt Emanuel’s chances in a tight run-off election.

Chief prosecutor Anita Alvarez came under attack for waiting more than a year to file charges against Officer Van Dyke; she was voted out of office in March following a relentless protest campaign in which demonstrators showed up at her public speaking engagements. Emanuel fired former police superintendent Gary McCarthy last December. Johnson, the new superintendent, was appointed in April. Earlier this month, a judge appointed a special prosecutor to oversee the case against Van Dyke, rather than rely on prosecutor Alvarez, whose term expires in December.