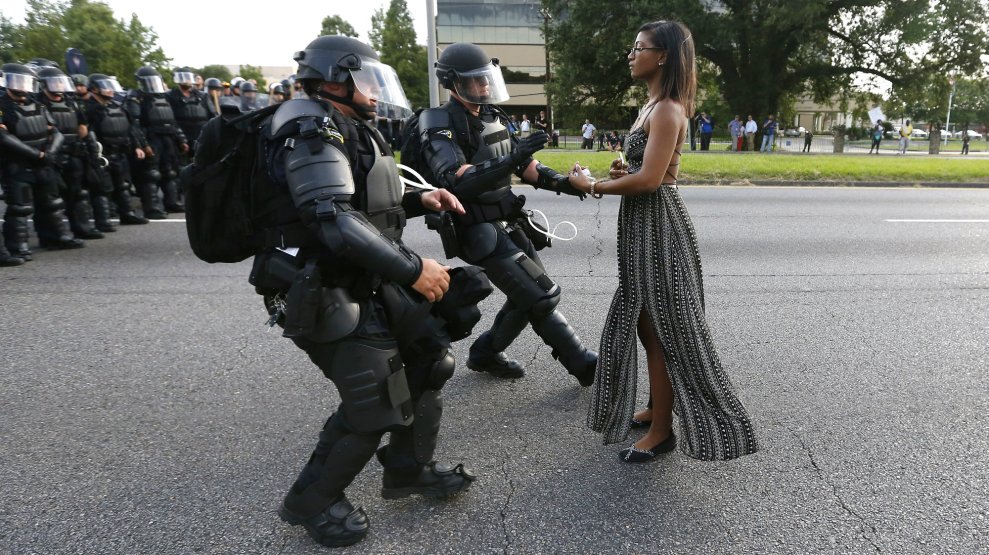 Police arrest Leshia Evans at a protest over the police shooting death of Alton Sterling in Baton Rouge on July 9.Jonathan Bachman/Reuters

Amid renewed nationwide protests over police killings of black men, a representative from the United Nations toured the United States with a peculiar goal: to assess whether the exercise of freedom of assembly and association in the country conforms to international human rights law.

UN special reporter Maina Kiai concluded a 17-day tour on Tuesday, during which he met with protesters, law enforcement, and government officials in 10 cities—including Baton Rogue, Louisiana; Ferguson, Missouri; Baltimore; and New York City—and observed protests at the Republican National Convention in Cleveland and the Democratic National Convention in Philadelphia, as well as Black Lives Matter protests in other cities. A full UN report on Kiai’s visit is due in June 2017, but Kiai posted his preliminary findings on his Facebook page on Wednesday. Many of them weren’t pretty:

Kiai said Louisiana’s new “Blue Lives Matter” hate crime law and similar proposals in other cities could have “disastrous effects.” He argued that the arrest of Christopher LeDay, the man who shared the Alton Sterling police shooting video widely, amounted to intimidation and harassment. He also criticized stop-and-frisk and called on the Department of Justice to enforce consent decrees against “as many of the [United States’] 18,000-plus local law enforcement jurisdictions” as possible in order to reduce discrimination in law enforcement.

This isn’t the first time the United Nations has involved US policing and protests in the global dialogue on human rights. Members of the Black Lives Matter movement spoke on a panel at a UN event in New York City earlier this month, and a delegation of organizers from Chicago testified before the UN Committee Against Torture in Geneva, Switzerland, in November 2014, along with the parents of Michael Brown.

You can read Kiai’s full assessment of his tour here.