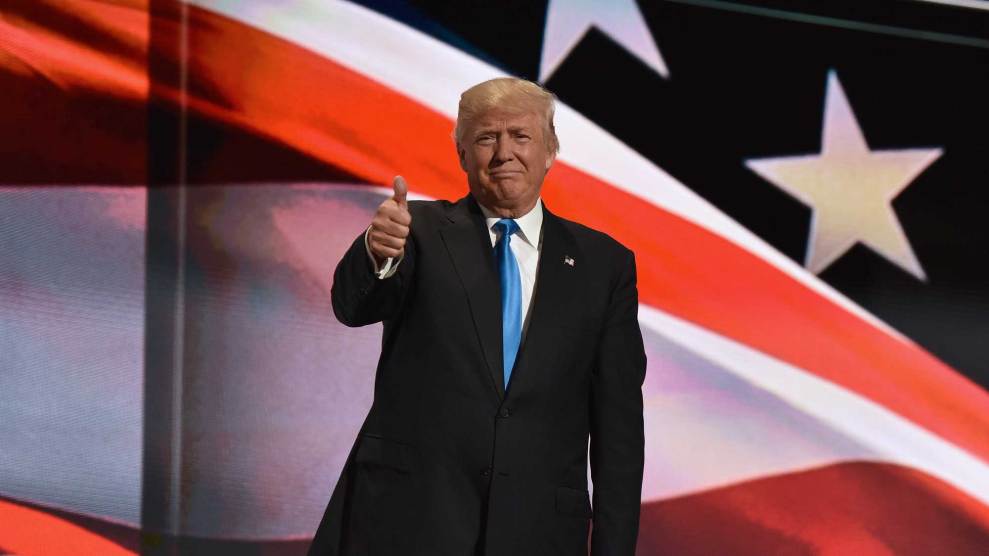 The first night of the Trump convention in Cleveland—it would be unfair to call it the Republican convention—conveyed an important and perhaps unintended message: Policy doesn’t matter.

The opening evening, marred by Melania Trump’s not-ready-for-prime-time plagiarism, was essentially hours of one-liners. One speaker after another hit the stage and hammered all-too-familiar memes fancied by the Trump base, most targeting Hillary Clinton, and they said virtually nothing of substance. The extravaganza was devoid of substance. Instead, the speakers delivered a string of slogans and buzzwords: Hillary for Prison, Benghazi, Blue Lives Matter, the Emails, Say No to Free Stuff, Call It Radical Islamic Terrorism, No More Political Correctness. It was politics by tweet.

The theme of the night was Make America Safe Again, and there was oodles of excoriation of President Barack Obama and former Secretary of State Clinton, with a sharp emphasis on Benghazi. (Though the family of Ambassador Chris Stevens has asked that his death and the tragic killing of four Americans not be politicized, Trump and the GOP insist on exploiting the issue.) Most of the speakers claimed that the nation was in deep peril, largely because of Obama and Clinton, and that there was no time to waste in changing administrations in order to save the country from ruin. Yet through the hours, there was no mention of any policy that a President Trump would implement—other than the wall on the Mexican border. What to do about ISIS? Not a word. How to combat jihadist violence? Nada. What to do about domestic shootings? Zip. How to contend with challenges from Russia, China? Fuhgeddaboudit. How to structure the US military for the threats of the 21st century? Huh.

Most of the speeches were vapid cant—some version of “Clinton, terrible; Trump, great.” Yet no speaker could point to any policy proposal put forward by Trump other than the wall. This was in keeping with Trump’s campaign, which has been fueled not by ideas but by his assertion that he’s the best, that he’s great, that he’s a winner who will make America win in the most winning fashion. The convention speakers could not tout Trump’s ideas on key fronts because he hasn’t shared them—or because what he has shared is a series of contradictory half-thoughts. General Michael Flynn and Sen. Joni Ernst (R-Iowa) certainly referred to the threat posed by ISIS. But could they cite Trump’s plan to crush the terrorist outfit? No. He has offered no plan. Instead, he has suggested various approaches—let the warring parties in Syria and Iraq fight it out themselves, do more with the US military—with no consistency. So Flynn and Ernst could say not much more than this: Clinton is weak, and Trump is strong.

Sen. Tom Cotton (R-Ark.) is a rising star in the GOP’s national security circle and accepted a prominent speaking slot on the first night of the convention. But his remarks were also substance-free. He tossed out tropes: “We’d like a commander-in-chief who speaks of winning wars, not just ending wars.” Cotton, a neocon hawk, has plenty of ideas about US military policy. He often delivers speeches full of specific proposals. But his notions are not in sync with what appears to be Trump’s skepticism about overseas military intervention. Cotton and his crowd were fans of the Iraq War—which Trump claims (against the existing evidence) he opposed. So there was nothing real that Cotton could talk about at Trump’s convention. And this is how absurd the situation was: At the end of his remarks, Cotton made a big point of quoting Dick Cheney’s speech at the 2000 GOP convention, when Cheney said of the Democrats, “It is time for them to go.” Yet Trump has repeatedly derided Cheney for leading the United States into the Iraq War. So here was Cotton citing Cheney, whom Trump has slammed for creating “one of the great catastrophes of all time,” in order to help Trump—it was dizzying.

The hot speech of the night came from former New York City Mayor Rudy Giuliani, and it, too, was largely rhetoric, albeit loud and passionate and delicious fare for the delegates. “Donald Trump is a leader,” Giuliani roared. “He will reassert America’s position as the nation with the best values to lead the world.” But he did not say how Trump would reassert the US position in the world. He shouted, “There’s no black America, no white America, there is just America.” And he added, “In short, [Trump] will lead by leading, not by following.” This was politics by assertion, not persuasion.

The convention has reflected Trump’s methodology and his medium of choice: Twitter. The speakers kept repeating bumper-sticker catchphrases and pushing hot buttons. When one of the several Benghazi speakers was at the podium bashing Clinton, a delegate rushed the stage and waved a “Hillary for Prison” sign. The crowd cheered with delight. Mission accomplished. In Trump’s GOP, policy ideas don’t really matter. What counts is reflecting resentment and fueling anger with simple and easy-to-share shortcuts. Benghazi. Rinse. Repeat.

Outside the Quicken Loans arena on Day Two, a person with a sense of humor held up a sign proclaiming, “Make Memes Great Again.” That was a good summation of the convention so far—and perhaps a fair appraisal of what Trump has done to the national discourse.