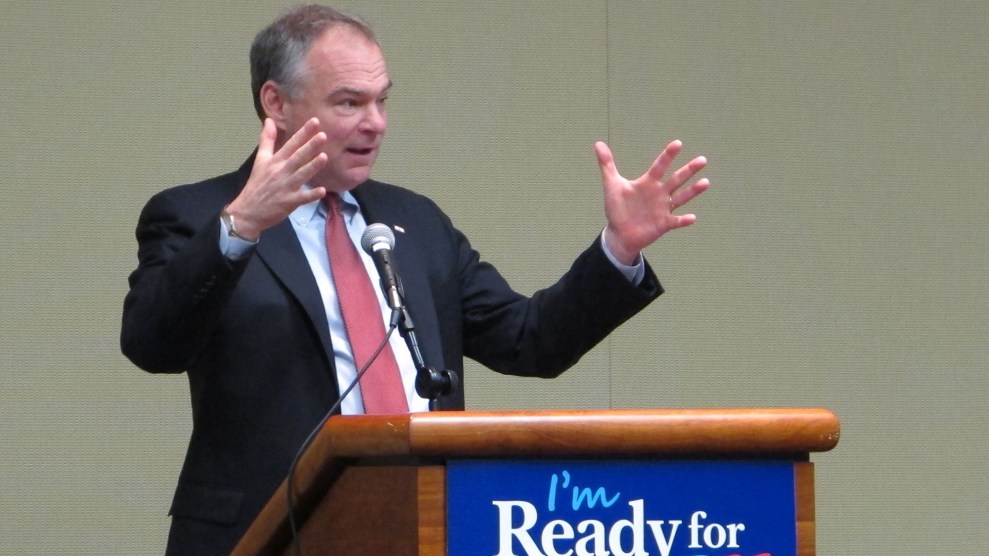 Hillary Clinton VP hopeful Tim Kaine auditioned Thursday afternoon at a campaign event in Northern Virginia, where he introduced the presumptive Democratic nominee and demonstrated his fitness for the job by speaking Spanish and attacking Donald Trump.

The Virginia senator has long been in the top tier of potential Clinton running mates. A former governor who represents a swing state in Congress and who passed the vetting process when Barack Obama looked for a VP in 2008, Kaine has often been labeled the “boring,” safe choice among Clinton’s options. In his speech Thursday, Kaine didn’t quite contradict that perception, relying on even-tempered-dad jokes and carefully scripted attacks. But he did convey a comfortable and friendly shared stage presence with Clinton.

Read about Tim Kaine’s past as a civil rights attorney.

Kaine kicked off his speech with a shout-out to DREAMers in the crowd and then praised Ready for Hillary—the proto-campaign super-PAC that boosted Clinton before she launched her official presidential campaign—noting that the word “ready” carries a different connotation in Spanish. When he was on a yearlong mission trip to Honduras, he learned “the best compliment you could pay someone was not to say inteligente—nobody said that about me, intelligent…It was to say they were listo, that they were ready.” He explained that being ready “is more than just on time; it means well prepared.”

He also made sure to highlight that while he’ll never match Elizabeth Warren’s vitriol against Trump, he wouldn’t be shy about going negative if he were to join the Democratic ticket. He questioned Trump’s judgment on foreign policy and attacked Trump U, lobbing such one-liners as:

Was this soaring eloquence? Hardly. But it showed a temperament that’s well-matched for Clinton herself. As I explained last week in a profile of Kaine, both politicians see themselves as being personally progressive but are more concerned with finding common ground to move policy forward. They are both Midwesterners who eschew lofty campaign rhetoric. And while some of Kaine’s one-liners might be groan-inducing, they pair well with Clinton’s own occasionally awkward presence on the stump. “I don’t know who created Pokemon Go,” Clinton said in her speech following Kaine, “but I’m trying to figure out how we get them to Pokemon Go to the polls.”

Get ready for a campaign full of awkward baby-boomer jokes if Clinton chooses Tim Kaine as her running mate.