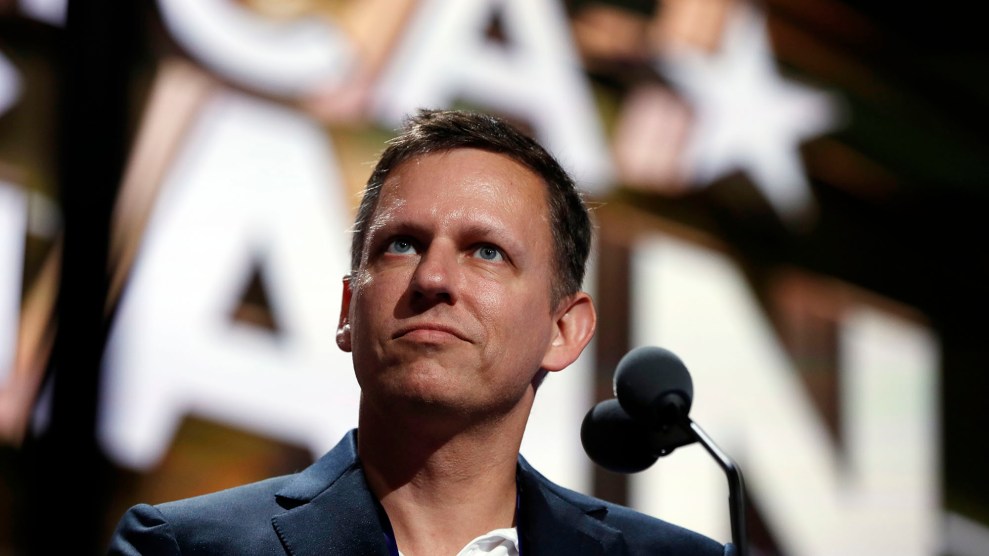 Peter Thiel at the Republican National Convention in ClevelandCarolyn Kaster/AP

At least one person speaking at the Republican convention tonight might actually be a match for Donald Trump when it comes to taking things (ahem) over the top. Tech investor Peter Thiel used to be best known for his early bet on Facebook—”the most lucrative angel investment in history”—although recently he’s garnered more attention for his controversial positions and personal vendettas. Here are the 12 things you should know about Silicon Valley’s most eccentric, (now) openly gay, Trump-loving libertarian billionaire.

Thiel was accused of “demagoguery”—by Condi Rice: As a student at Stanford University, Thiel founded the Stanford Review, a highbrow version of the notoriously conservative Dartmouth Review. A few years later, he and another former Stanford Review editor wrote a book titled The Diversity Myth: Multiculturalism and the Politics of Intolerance at Stanford, which criticized political correctness in higher education. Then-Stanford provost Condoleezza Rice (later George W. Bush’s national security adviser) accused the pair of concocting “a cartoon, not a description of our freshman curriculum,” and added that the book was “demagoguery, pure and simple.”

Thiel is known around the Valley as “Don of the PayPal Mafia”: In 1998, Thiel co-founded the online payments company that would later become PayPal. He hired many Stanford Review alums, who, in the company’s early days, were known to keep Bibles in their cubes and hold workplace prayer sessions. Former PayPal counsel Rod Martin later tried to start a conservative version of MoveOn.org, and former VP Eric Jackson founded the book-publishing arm of the conservative WorldNetDaily, which famously released the children’s tale Help! Mom! There Are Liberals Under My Bed. (Two other members of the PayPal Mafia, Elon Musk and Keith Rabois, also went on to become billionaires.) Thiel later wrote that he’d wanted to create “a new world currency, free from all government control and dilution—the end of monetary sovereignty, as it were.”

Thiel is a self-described “conservative libertarian.” He supported the presidential bids of Ron Paul, donating more than $2.6 million to a Paul super-PAC in 2012. “I think we are just trying to build a libertarian base for the next cycle,” Thiel said at the time. But that was before Trump arrived on the scene in a substantial way.

Thiel launched one company that is extremely non-libertarian. In 2004, he co-founded Palantir Technologies with a $30 million investment. The company’s other major investor is In-Q-Tel, the venture capital arm of the CIA. The FBI and the NSA employ Palantir’s data-mining and surveillance technology to monitor domestic and foreign terrorism suspects. Thiel has said civil liberties advocates should welcome Palantir. “We cannot afford to have another 9/11 event in the US or anything bigger than that,” he told Bloomberg. “That day opened the doors to all sorts of crazy abuses and draconian policies.”

Thiel blames women and welfare for destroying democracy. “I no longer believe that freedom and democracy are compatible,” Thiel wrote in 2009 on the blog of the libertarian Cato Institute. “The 1920s were the last decade in American history during which one could be genuinely optimistic about politics. Since 1920, the vast increase in welfare beneficiaries and the extension of the franchise to women—two constituencies that are notoriously tough for libertarians—have rendered the notion of ‘capitalist democracy’ into an oxymoron.”

Back in the real world, if you want a job at Thiel Capital, he will expect you to have a “high GPA from a top-tier university.”

Thiel is a climate skeptic. The idea that human activity alters the climate is “more pseudoscience” than science, he told Glenn Beck in 2014. Thiel is also somewhat uncertain about the veracity of Darwinian evolution.

Thiel bankrolled Hulk Hogan’s lawsuit against Gawker. He spent $10 million on the Hogan lawsuit to get back at Gawker for outing him as gay (an open secret at the time) in 2007, and for writing negative articles about his friends. “It’s less about revenge and more about specific deterrence,” he told the New York Times.

Thiel recently invested in a marijuana company. His Founders Fund last year sank an undisclosed sum into Privateer Holdings, a Seattle-based company that, among other things, grows pot in Canada and owns “the official Bob Marley cannabis brand.”

Thiel wants to create sovereign micronations on the high seas. He is a major funder of the Seasteading Institute, a think tank that envisions floating city-states as incubators for alternative models of governance. (On Silicon Valley, the Peter Gregory character has an offshore haven populated by autonomous machines.)

Thiel wants to cheat death. He has signed up with a cryogenics company to be deep-frozen upon his death in the hope that he will later be revived by future medical advances. And his foundation has supported anti-aging research.

Thiel’s support for Trump is an oddity in Silicon Valley. Trump’s stance on everything from immigration to mass surveillance is anathema to Valley techies. “In the Obama years, much of Silicon Valley has become very close to Democrats,” notes the New York Times‘ Farhad Manjoo. “This year there was an opportunity for a Republican to make overtures to tech—but with Mr. Trump, that chance seems to have passed.”