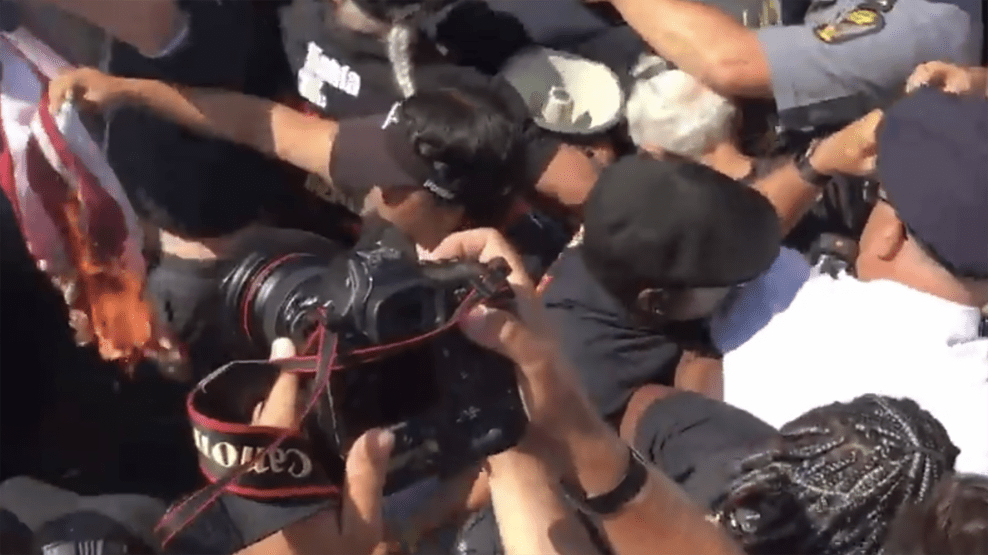 Eighteen people were arrested Wednesday afternoon after an activist lit an American flag on fire outside the Republican National Convention in Cleveland. Flag-burning is protected free speech under the First Amendment, but in a statement, police said that “a demonstrator also lit himself on fire and those around him due to the close proximity” and that two officers were assaulted by demonstrators. According to police, the demonstrators were arrested for assault, failure to disperse, and resisting arrest.

The arrests on Wednesday mark the most significant conflict between protesters and police so far during the convention, which has seen mostly peaceful protests by various groups. On Tuesday, conspiracy theorist Alex Jones barged his way into Cleveland’s Public Square to confront a group of communists, nearly triggering a brawl. No arrests were made in that situation, and police characterized it as a “small shoving match.” In total, more than 20 protesters have now been arrested during the convention, with charges ranging from criminal mischief related to climbing a flag pole to hang a banner to stealing a gas mask from a police car, according to police.

On Wednesday, shortly after 3 pm local time, a group from the Revolutionary Communist Party ignited an American flag in front of one of the gated entrances to the convention site, where delegates pass through security on their way into Quicken Loans Arena. After announcing that the group supported neither Hillary Clinton nor Donald Trump, a man lit the flag on fire. USA Today reported that the man was Gregory “Joey” Johnson. Johnson is the man who lit an American flag on fire in 1984 at the Republican National Convention in Dallas, which led to a 1989 Supreme Court ruling establishing that burning an American flag is protected under by the Constitution.

In this video, a Cleveland police officer can be seen trying to put the flames with what police say was a fire extinguisher, before the police move in and grab the protesters:

You can see a clearer picture of the scene here:

Outside #RNCinCLe a group of protesters tried to burn two flags; riot police moved in to arrest at least 8 people. pic.twitter.com/WRPf7UdluF

Another protester was subsequently arrested about a block from the first incident after trying to set another American flag on fire.

* This story has been revised and updated to reflect subsequent statements from law enforcement.