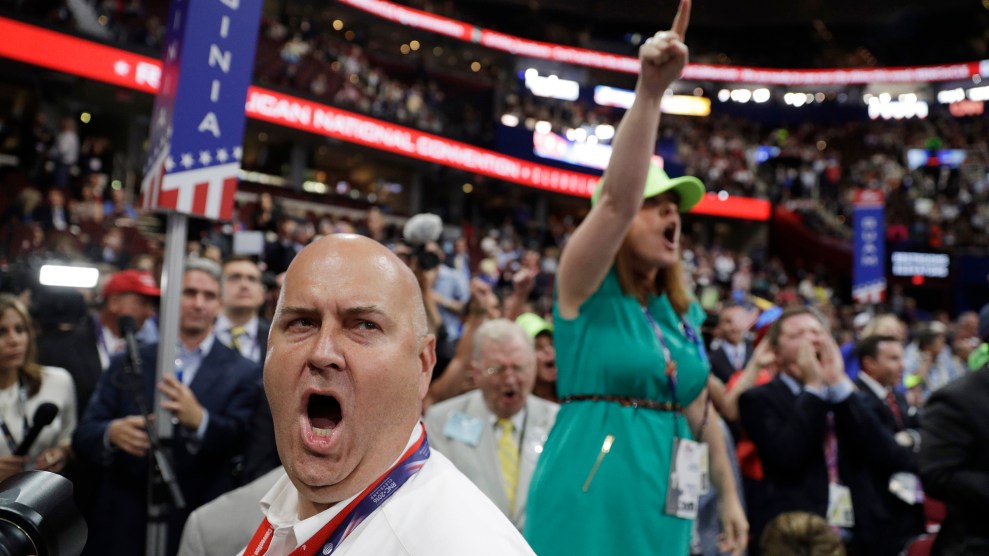 After their revolt was crushed at the Republican National Convention on Monday, Never Trump delegates are planning one final push to deny Donald Trump the nomination on Tuesday in Cleveland. There’s little likelihood of success—and the effort may be nothing more than symbolic—but it appears the movement will go down swinging.

On Tuesday evening, the convention will be gaveled into session for the roll call of the states, when the delegates’ votes will be counted in order to officially make Trump the nominee. According to Kendal Unruh, a Colorado delegate and a leader of the dump Trump effort, her movement will use this final procedural vote to stage their last stand.

During the roll call of the states, the head of each delegation will declare his or her states’ vote breakdown. But delegates who are bound under convention rules to vote for Trump—but who personally oppose him—plan to register their dissent at this time using a specific parliamentary procedure.

“There’s a process that you use,” Unruh explained. “You have to actually directly challenge at the microphone to the chairman and say a specific phrase or they are going to call it out of order.” She declined to state the phrase, citing strategic reasons.

Technically, delegates bound to Trump by their state party rules must vote for him. But Unruh contends that there is nothing a state can do, and little the national party or state parties can do, to sanction rank-and-file delegates if they want to challenge this rule individually and vote their conscience. They are unlikely to stop Trump from reaching the 1,237 votes necessary to officially become the nominee, but the televised show of dissent will be an embarrassment to the Trump campaign and tarnish the image of unity the Republican National Committee is struggling to project this week.

The lingering tensions within the GOP were on full display on Monday, when Unruh and her allies made their first attempt to derail Trump’s nomination, briefly sparking chaos on the convention floor. That revolt failed after Republican National Committee officials and Trump aides persuaded delegates to abandon the anti-Trump delegates’ plan—an effort that Unruh claimed RNC chairman Reince Priebus was personally involved in.

After Tuesday’s vote making Trump’s nomination official, the Never Trump effort will finally be out of procedural weapons to use against Trump. But Unruh says that won’t stop them from planning more symbolic shows of opposition to Trump in Cleveland. “We have to hold them accountable for how they’ve treated us,” she said of the Trump campaign and the RNC. “There’s still ways to show discontent, and that’s what we’re discussing.”

“We’re dealing with a narcissist,” she continued. “There’s one thing he’s really gonna hate, and that is people trying to embarrass him and not pay attention to him.”