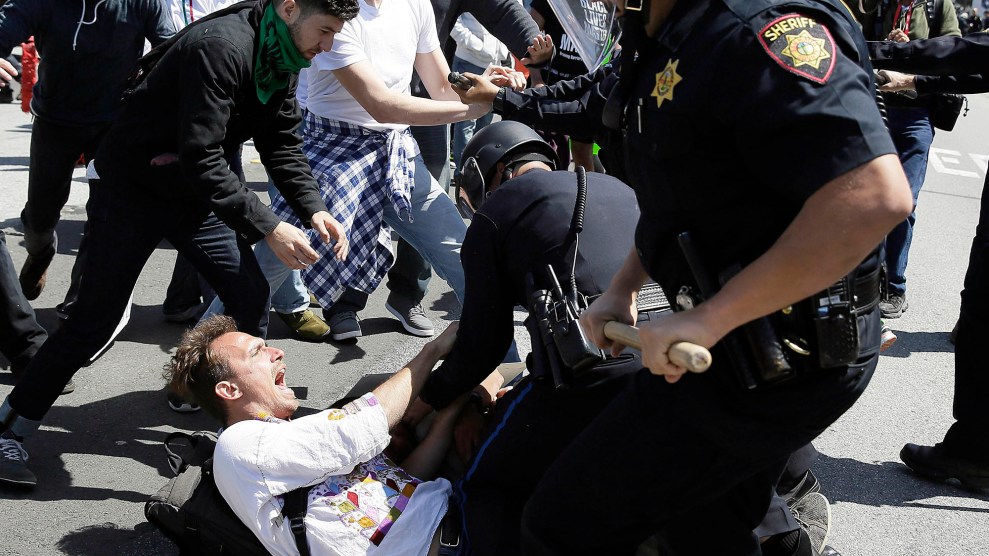 Donald Trump rallies have been marked by violence. What does that mean for Cleveland?Eric Risberg/AP

Tens of thousands of people will descend on Cleveland this week for the Republican National Convention, an event that will take over much of the city’s downtown. Several busy streets are cordoned off and many blocks are either closed entirely or severely restricted by law enforcement officials.

Throngs of protesters and journalists will be in town, and the federal government is planning to have thousands of law enforcement officials there too. The Department of Homeland Security is set to deploy 3,000 “security agents” to Cleveland, according to Politico, and Homeland Security Secretary Jeh Johnson expects there to be “at least another thousand or so” other federal law enforcement representatives. The Cleveland police department is deploying 500 officers, and the thousands of other police officers will be sent from around the country to back them up. Several police departments have decided not to send personnel because they say Cleveland is not sufficiently prepared for potential violence.

The heavy security is typical for high-profile events, but there are extra layers of security in response to the violence that has erupted in places such as San Jose, California, when protesters and Donald Trump supporters faced off at one of his campaign stops. Between the security design and the grant approval process, Cleveland has created buffer zones between the two groups, although anti-Trump and pro-Trump demonstrators will inevitably cross paths in the city’s parks and streets.

Here are some maps issued by the city of Cleveland and the ACLU of Ohio showing where security boundaries have been drawn and what protesters might expect. The official events will take place at Quicken Loans Arena, which law enforcement authorities have put inside a “security zone” that can only be accessed by those with official credentials, such as convention delegates and accredited media. Most protesters will not be able to access this area. 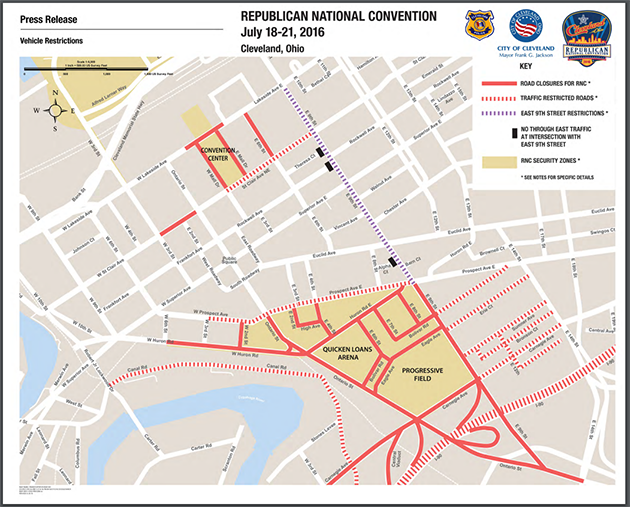 The black and green line (below) represents the route for permitted “parades”—the city’s term for moving protests that can last up to 50 minutes. The large detour on the line will route the protests around Progressive Field, the baseball stadium within the security zone that sits right across the street from Quicken Loans Arena. So far four events have been granted valid parade permits and three of them take place on Monday, the first day of the convention: America First Unity Rally, a pro-Trump march organized by former Trump adviser Roger Stone and conspiracy theorist Alex Jones, followed by the anti-Trump Vets vs Hate (Iraq Veterans Against the War) and the anti-Republican March to End Poverty. The final event on the parade route will be the Stand Together Against Trump rally, scheduled for Thursday from 1 p.m. to 2 p.m. That is also the day the nominee will deliver his keynote address to the convention. 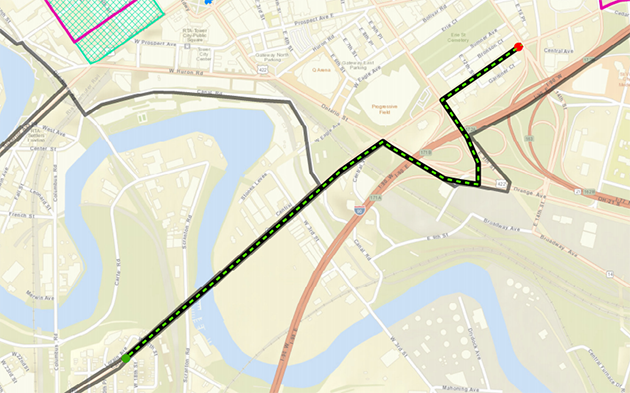 All of this takes place within a 1.75-squre-mile chunk of downtown Cleveland in what the Secret Service has dubbed the “event zone” (outlined below with the dark gray line). Within the gray line, special restrictions apply: Protests can only take place with a permit issued by the city, and the same goes for rallies in city parks within the zone. Many items are banned, including rope, glass bottles, and swords, among others (but guns are permitted). The original event zone was nearly double the size to give authorities wider control, but an ACLU lawsuit led to a deal reached June 24 that limited the size, created a longer parade route (the route permitted rallies and protests will take), and left a few downtown parks out of the zone. 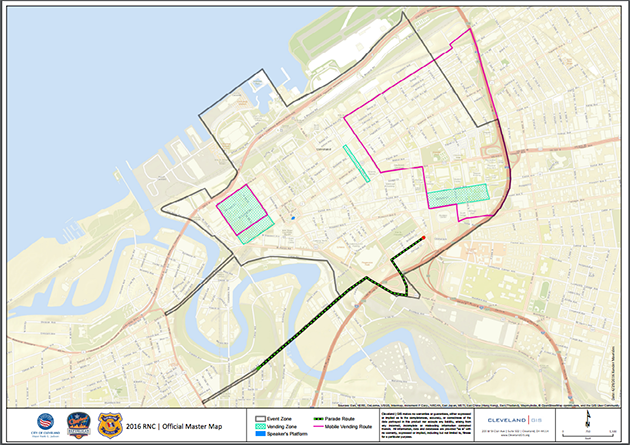 Also within the zone are Willard Park and Perk Plaza, which have been reserved by several groups for rallies or for information centers, and the speaker’s stage in Cleveland’s Public Square, a recently renovated public space. Between the two parks, groups such as Food Not Bombs, the League of Women Voters, and the anti-gay Westboro Baptist Church have each been granted permits. The Quicken Loans Arena (blue), Perk Plaza (green), and Willard Park (red) are all separated by several blocks, so much of that activity won’t be near the central venue of the convention. 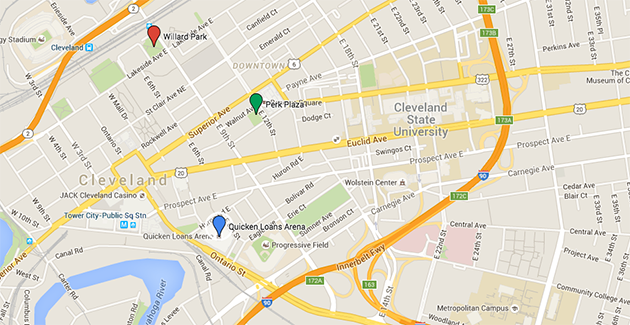