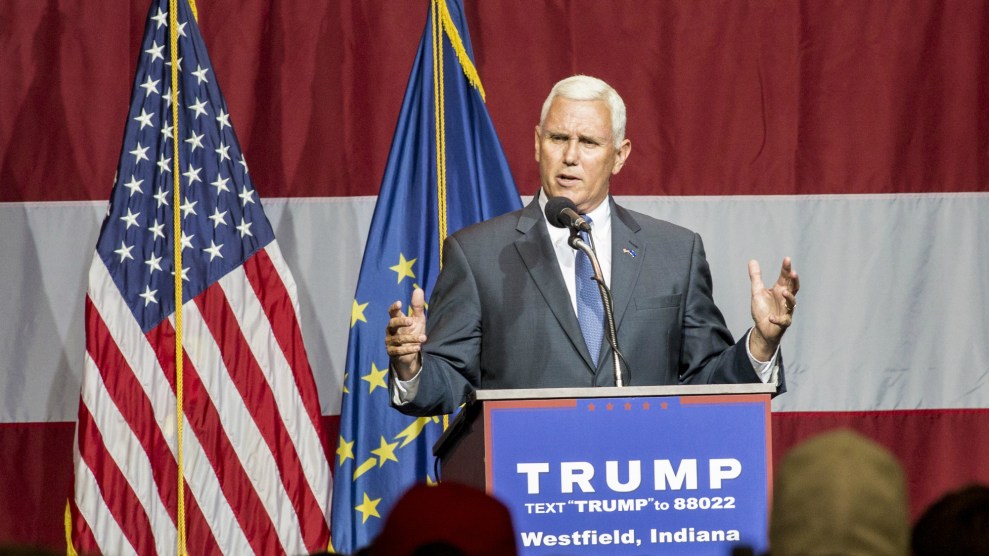 Shortly after Trump confirmed the media rumors and tweeted that Pence would be joining the ticket, the Clinton campaign rolled out a new web video going after the Indiana politician. The video summarizes Pence’s policy positions over the years, taking direct aim at the governor’s anti-abortion stance, his efforts to defund Planned Parenthood, his support of Indiana’s controversial religious freedom law, and his opposition to comprehensive immigration reform:

It’s official: @realDonaldTrump just chose Mike Pence as his running mate. What you need to know about him:https://t.co/VpmloblDhS

The video concludes with this message: “Donald Trump and Mike Pence: building a wall between America and progress.”

The Clinton campaign also quickly published a blog post on its website titled “5 Things Every Voter in America Needs to Know About Mike Pence, Donald Trump’s New Running Mate.” The post highlights many of the same points brought up in the video and calls Pence a “would-be disaster for America.”

“Trump’s newly announced running mate manages to give his own bigotry and hatred a run for its money: Trump has chosen the most extreme vice presidential pick in a generation,” the post says.

If you had any doubts about Trump sticking with his dangerous plan for America, say hello to his VP pick. pic.twitter.com/xuFClfZeLi

If you like Donald Trump, you’re going to love his choice for vice president. pic.twitter.com/5F5jIz89HA

Clinton’s blitz against Pence seems to have been aided by early news reports on Thursday that pointed to Trump selecting the governor as his running mate. Trump initially planned to announce his vice presidential pick at a Trump Tower press conference on Friday, but he tweeted that he would be postponing the announcement in light of Thursday’s deadly attack in Nice, France.

Delay seemed to give Clinton camp time to prepare. Within mins 1) Video 2) Statement 3) Text to supporters 4) Email to supporters 5) Tweets.

Trump is expected to formally announce his selection of Pence at an event on Saturday.