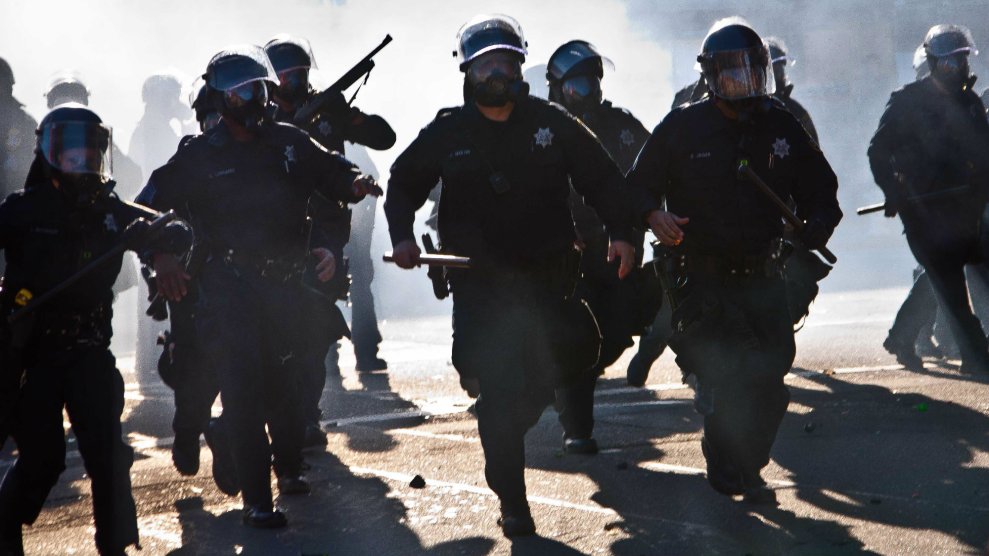 Police at an Occupy protest in Oakland in 2012Glenn Halog/Flickr

With the Republican National Convention imminent, the Cleveland Police Department is finalizing its security plan for what is expected to be a volatile few days. The city announced last Friday that it was updating its plan following last week’s mass shooting of police officers in Dallas, and though it shared scant detail, the Cleveland PD is set to be outfitted with plenty of heavy gear.

The RNC is designated as a National Special Security Event by the US Department of Homeland Security, which entitled Cleveland to a $50 million federal grant toward its security plan. According to bids the city has posted to its website and reports from local news outlets, so far Cleveland has spent the money on:

Other supplies include bulletproof helmets, pepper spray, two-point slings (used to carry rifles) and inmate mattresses. The Cleveland PD also asked the Chicago Police Department to loan it three bearcats, and Taser International is loaning the department 300 body cameras that can be attached to riot suits. The city also put out a bid for tear gas, according to the Washington Post, and it recently upped its protest insurance coverage from $9.5 million to $50 million.

This approach by the city isn’t unusual, per se; Tampa, Florida, bought similar kinds of equipment (though less of it) ahead of the RNC there in 2012. But Cleveland is the first city to host a political convention with its police department under a consent decree with the federal government. The Cleveland PD has been under the oversight of a federal monitoring team charged with enforcing the decree since October 2015, because of a history of excessive force and other abuses. Jonathan Smith, a former Justice Department lawyer who supervised the agency’s Cleveland PD investigation, told the Marshall Project, “You would want a department [to provide security] that has systems that are in place where there is better accountability and better supervision.” In a report issued in June, the team monitoring the Cleveland PD under the decree characterized the police department’s ability to investigate officer misconduct as “dire.” Cleveland’s consent decree calls for changes to the department’s use-of-force policy and internal-review protocol, but those changes are still in progress.

Jocelyn Rosnick, an attorney with the National Lawyers Guild’s Cleveland office, told Mother Jones that the group has concerns about the equipment and tactics that the Cleveland PD plans to deploy. The police department’s purchase of 10,000 flexible handcuffs, she said, indicates “they are preparing for mass arrests.” She also cautions about potential escalation: Earlier this year, a coalition of international civil liberties groups released a report on the health impacts of crowd-control weapons commonly used by law enforcement. The report focused on how projectile weapons such as rubber bullets or beanbags can cause severe injuries, including ruptured organs and even death. The report also found that chemical weapons like tear gas and pepper spray can cause permanent disabilities such as blindness and respiratory problems.

Rosnick also notes that wearing riot gear is a display of force that could chill people’s First Amendment right to protest. (Cleveland officials have said officers will only wear riot gear if it becomes necessary.) And she wonders whether the Cleveland PD has sufficient training or will show adequate restraint. “The police department that was found to use excessive force a couple months ago,” she said, “is still the department we have today.”

Jane Castor, who was chief of the Tampa Police Department when that city hosted the RNC in 2012, told the Cleveland Plain Dealer that the Tampa PD’s approach to security—which included officers working in standard uniforms, passing out food and water to protesters, and arresting people only as a last resort—resulted in just two convention-related arrests and zero lawsuits from protesters after the convention. Cleveland is expected to see many more protesters than Tampa did, however.

Militarization of police departments has returned to the spotlight since the country erupted with protests last week following two high-profile fatal shootings by cops. Baton Rouge, Louisiana, police officers used tear gas, pepper spray, and a Long Range Acoustic Device (LRAD) to disperse protesters during demonstrations over the police shooting death of Alton Sterling. And officers in St. Paul, Minnesota, used smoke bombs to disperse a crowd that had blocked a highway.

Watchdogs are working to prepare protesters for what may come. Matthew Barge, the attorney appointed to lead the federal oversight effort, told the Marshall Project that the public could report instances of police abuse at the RNC on the monitoring team’s website. “We are not going to be bashful about reviewing what happens at the RNC,” he said.