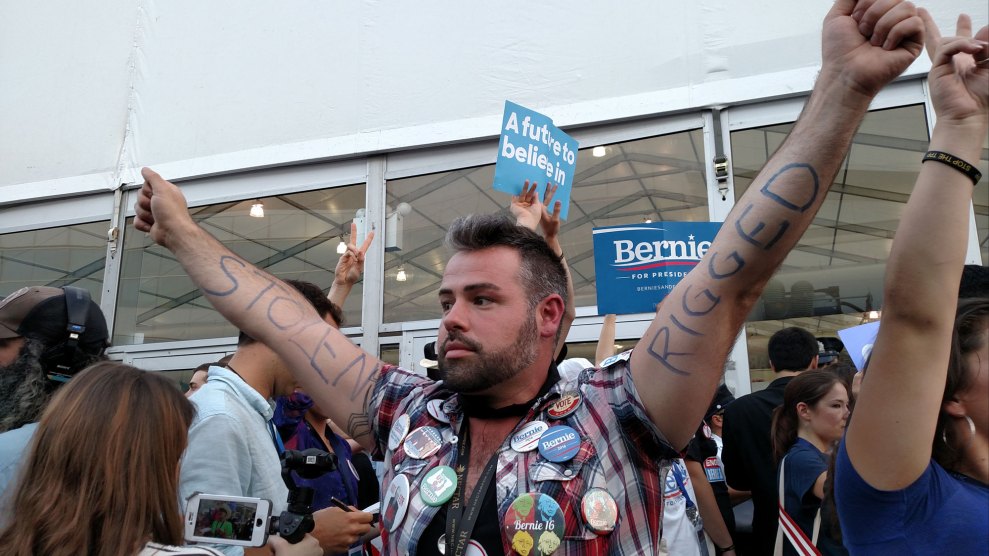 Dozens of Bernie Sanders delegates and supporters walked out of the Democratic National Convention on Tuesday night after the party nominated Hillary Clinton for president by acclimation. The delegates streamed out of the Wells Fargo Arena chanting, “We are the 99 percent!” and some moved their protest to the media center across the street before police officers said the tent had reached its capacity. But the protesting delegates comprised a small fraction of the Sanders supporters in the arena, and they diverged both on the reasons for the walkout and how long it might last.

“I can say that I sincerely disagree with the actions that he took,” said California delegate Ryan Lopez. “He told us that this was a political revolution. And we are now carrying forward with the revolution.” Lopez, a University of Southern California student, cited “problems” with the state’s June 7 primary in arguing that Clinton should not be the nominee, and made his decision to walk out after he and his allies had failed to persuade superdelegates to switch their votes to Sanders.

Trey Villanueva, a delegate from Washington state, was streaming the proceedings on his iPhone as we spoke outside the media tent. His decision to walk out was the culmination of a multitude of mounting frustrations with the “rigged” nominating system. “I’m gonna take it like I see it,” he said, when asked if he intended to return to the convention hall on Wednesday. “Hopefully I’m gonna have a beer at some point. Maybe a Scotch—that’d be good.”

Still, he didn’t hold Sanders’ cooperation on the roll-call vote against him, and he left the door open to supporting Clinton. “He’s got to do what he’s got to do,” Villanueva said. “I understand and I respect him. Same with Elizabeth Warren, and I respect her. They’ve got a job to do in the Senate—we can’t stand to lose our advocates.”

Standing with his arms outstretched—”Stolen” and “Rigged” written on each arm—Matthew Rock, an Oregon delegate, explained that his walkout was only temporary. “We intend to go back in and support Black Lives Matter,” he said, referring to the convention speeches by women whose children had died from gun violence or police custody. While some of his fellow delegates had walked out spontaneously, Rock had been planning a walkout since the early morning, “after yesterday’s Hillibuster.”

“We were bullied, we were suppressed, we were asked to keep our signs down,” Rock said, outlining his list of grievances with the convention process. “This happened again today. Oregon delegates with their homemade Bernie signs were told that we don’t allow them to have signs, and yet the volunteers—100 percent Hillary supporters, by the way—are handing out homemade signs that the Hillary Oregon delegation had never seen. So yesterday we had discussions on what to do in the eventuality that this happened.”

But after the tense opening day of the convention, where Sanders supporters booed Clinton’s name vociferously on the convention floor and in an afternoon meeting with the senator himself, the story on Tuesday was less about the delegates who left than about how many stayed behind. After Sanders moved for the roll-call vote to be done by acclamation, handing the nomination to Clinton without a formal count, the floor erupted in a sustained applause with hardly a dissent to be heard.