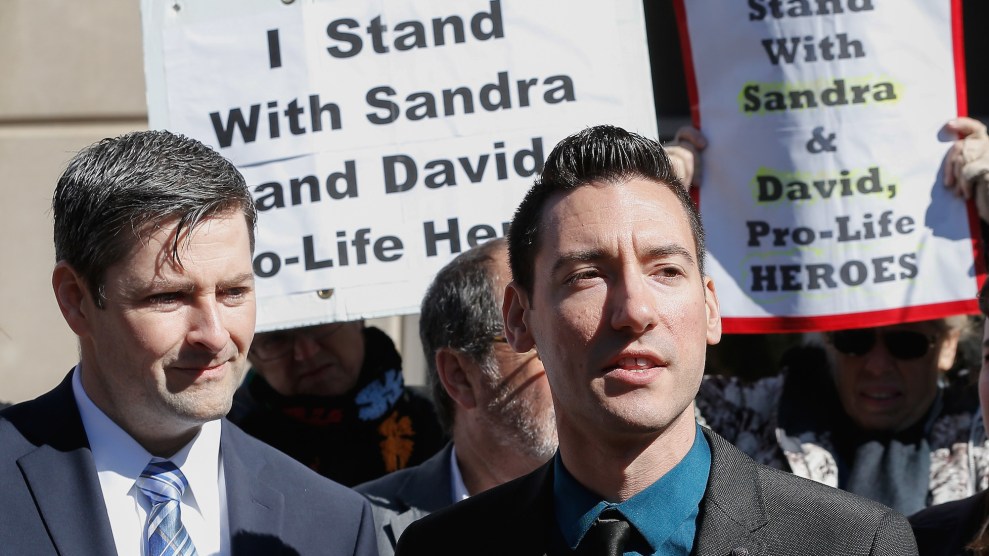 On Tuesday morning, Texas prosecutors dismissed the felony charge against David Daleiden, the founder of the anti-abortion Center for Medical Progress, and Sandra Merritt, one of his associates, related to their work last year in creating sting videos targeting Planned Parenthood. They were facing charges of tampering with a government record over allegations that they had made and used fake drivers’ licenses to facilitate their meetings with Planned Parenthood staffers.

Under Daleiden’s leadership, the CMP last summer released a series of secretly-recorded, deceptively-edited videos which purported to show Planned Parenthood staffers negotiating the sale of fetal tissue, a practice which is illegal. Since then, 12 state-level and 4 congressional investigations have found no such wrongdoing by Planned Parenthood. Despite these exonerations, the video series continued to reverberate, spawning state and federal efforts to defund the women’s health provider.

The charges dismissed today were issued in January by the Harris County District Attorney’s office. After the CMP videos, the office had assembled a grand jury to investigate Planned Parenthood but after an extensive investigation that spanned more than two months, the group cleared the women’s health provider and chose to indict Daleiden and Merritt instead. The grand jury also charged the pair with a class A misdemeanor: offering to buy human organs, namely fetal tissue. The pair was cleared of this charge in June.

After Tuesday morning’s dismissal, Daleiden touted the victory on Twitter:

Wow @PPact @PPGulfCoast all that for nothing? Maybe you should focus on your own criminal defense instead of colluding to come after me.

But Daleiden’s legal troubles aren’t over yet. A lawsuit filed last summer against CMP by the National Abortion Federation is ongoing, as is a suit filed by Planned Parenthood in California in January, accusing the CMP of racketeering, illegally creating and using fake driver’s licenses, and invading the privacy of, and illegally recording, Planned Parenthood officials and staff.