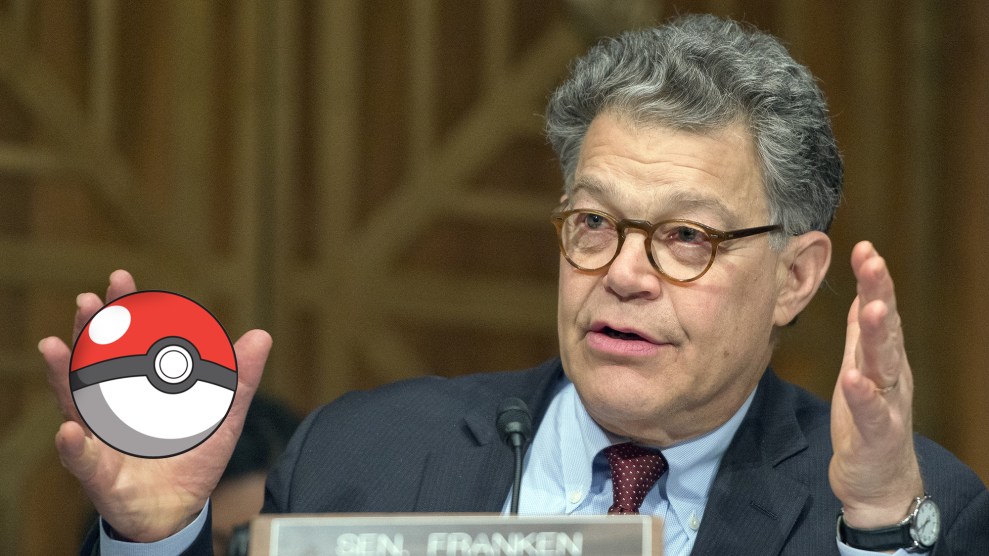 Pokemon Go is all the internet cares about at the moment. Within the first week of the game hitting app stores in the United States, the augmented-reality game has been downloaded more than Tinder and is on pace to move past Twitter in active users, with an estimated 7.5 million downloads so far. It’s causing headaches at the Holocaust Museum and late-night gym battles outside the White House.

But one senator is worried that the game’s maker has gone too far in trying to catch all of its users’ information. On Tuesday afternoon, Sen. Al Franken (D-Minn.) sent a letter to Niantic, the company behind Pokemon Go, posing a series of questions to clarify how the company will handle user information. “While this release is undoubtedly impressive,” Franken wrote, “I am concerned about the extent to which Niantic may be unnecessarily collecting, using, and sharing a wide range of users’ personal information without their appropriate consent.”

Media reports over the weekend highlighted that Niantic pushes users to sign up for the app by linking it to their Google account. And unlike many such services, for which a person signs up with a Google or Facebook account but only hands over limited information to the third-party app, Niantic’s privacy policy said it gathered access to a user’s full account—including the contents of his or her Gmail account—when the user signs up for Pokemon Go.

Niantic quickly responded to the news reports and said it would dial back the amount of information it can access from Google. But Franken wants to be extra sure that Pokemon Go is not exploiting its users’ privacy. “When done appropriately, the collection and use of personal information may enhance consumers’ augmented reality experience,” Franken continued, “but we must ensure that Americans’—especially children’s—very sensitive information is protected.”

Franken oversees a Senate subcommittee on privacy, technology, and the law and has used that perch to question companies like Uber on how they handle user information.