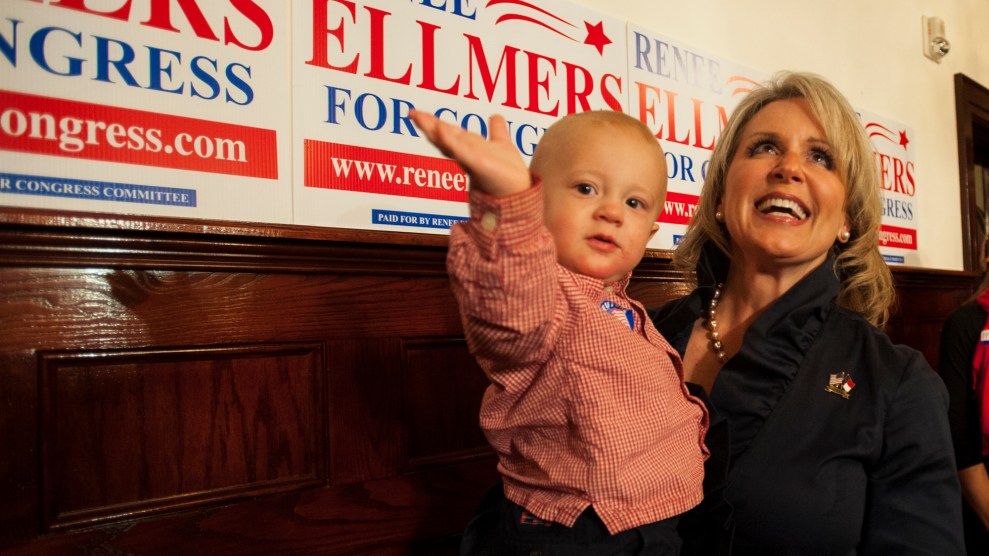 Trump endorsed Ellmers, the two-term congresswoman for North Carolina’s 2nd District, on Saturday, just three days before North Carolina voters went to the polls. Her campaign used a recording of the endorsement in a final get-out-the-vote effort on Monday. “Renee was the first congresswoman to endorse me, and boy is she a fighter,” Trump said in the message. “Together, we will make America great again.”

A tea party darling known for suggesting that her Democratic opponent in the 2010 congressional race supported the building of a “victory mosque” near Ground Zero, Ellmers was plagued by attacks from right-leaning organizations in her bid to keep her seat in the recently redrawn 2nd District. The Koch-backed Americans for Prosperity and the Club for Growth each contributed six-figure amounts to the anti-Ellmers effort, citing the congresswoman’s willingness to compromise on spending legislation and her vote to reauthorize the Export-Import Bank as proof that her conservatism didn’t extend to her votes on major issues. But the most withering condemnations of Ellmers’ performance in Congress came from the anti-abortion groups that once saw her as a key ally.

The trouble for Ellmers, typically a reliable pro-life vote in the House, began last year after she joined a group of Republican congresswomen in objecting to a provision in the proposed Pain-Capable Unborn Child Protection Act that would have required rape victims to file a report with police before being permitted to have an abortion after 20 weeks. Ellmers, one of the provision’s most vocal opponents, argued that the requirement would do additional damage to the GOP’s image among younger and female voters. Democrats and women’s rights groups argued that the provision would not increase the number of rapes reported to police, citing Bureau of Justice Statistics figures that placed the average percentage of rapes and sexual assaults reported at fewer than 40 percent.

The congresswoman reportedly supported the version of the bill that did not contain that provision, but the anti-abortion group National Right to Life still cited Ellmers’ initial objection as a key reason for the legislation’s failure to pass. In March, the group sent a letter to Holding announcing its support. The Susan B. Anthony List, a group that works to elect anti-abortion women to Congress, also endorsed Holding in the primary and ran an online campaign urging voters to “Dump Ellmers.”

“Rep. Renee Ellmers was our ally until she led the charge to derail the Pain-Capable Unborn Child Protection Act,” Marjorie Dannenfelser, the president of the Susan B. Anthony List and a North Carolina native, said in a statement after the primary results were announced. “That’s why we had to flex the political muscle of the pro-life movement. She has her own failed leadership to blame for this loss.”