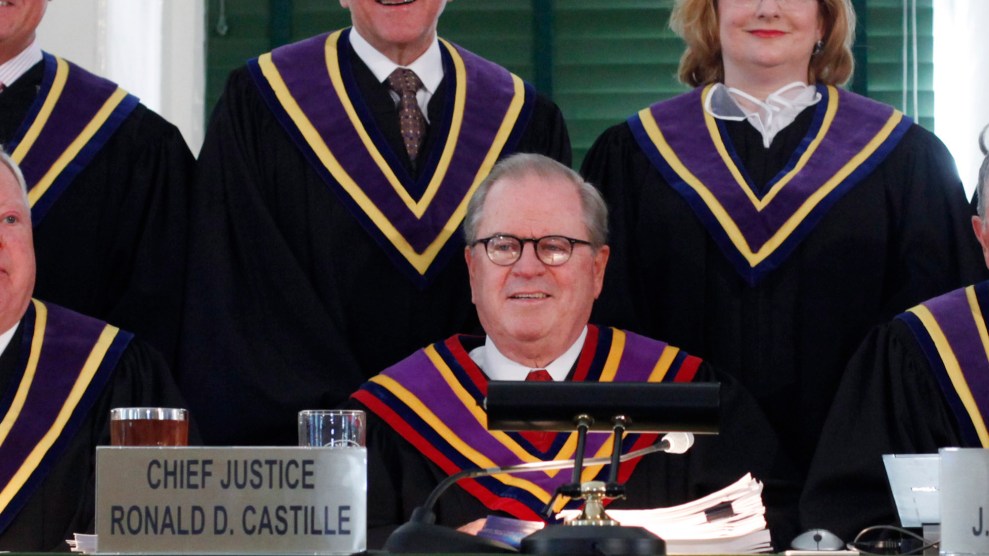 At a time when Donald Trump, with his attacks on a Mexican American federal judge, has prompted a national conversation about judicial conflicts of interest, the US Supreme Court Thursday delivered a strong opinion cracking down on just that issue, in a case that shows what real judicial bias might look like.

Williams v. Pennsylvania involves the now-retired Pennsylvania Supreme Court Chief Justice Ronald Castille, who didn’t see any problem with ruling in the case of a death row inmate whose prosecution he’d overseen three decades earlier as the local district attorney—a prosecution that involved serious official misconduct. Despite requests from public defenders that he recuse himself in the case, Castille continued to rule on motions filed by Terry Williams, a man who, at the age of 18, murdered his sexual abuser in 1984 and was sentenced to death. Not only did Castille fail to recuse himself, but he wrote opinions in Williams’ case attacking the public defenders for their “obstructionist anti-death penalty agenda,” which he said the courts needed to guard against, lest they turn death penalty appeals into “a circus where [they] are the ringmasters, with their parrots and puppets as a sideshow.”

The Supreme Court was not amused. Writing for the majority in a 5-3 decision, Justice Anthony Kennedy said the due process clause of the Constitution prohibited Castille from involvement in the case as a judge, as “there is an impermissible risk of actual bias when a judge earlier had significant, personal involvement as a prosecutor in a critical decision regarding the defendant’s case.”

Castille and the state of Pennsylvania had defended his participation by arguing that deciding to pursue a death sentence against a criminal defendant was no big deal, and one that hardly qualified as “significant, personal involvement.” That argument persuaded Chief Justice John Roberts Jr. and Justice Samuel Alito, who dissented from the majority’s opinion, as well as Justice Clarence Thomas, who wrote a separate dissent. But Kennedy noted that there are few bigger decisions a prosecutor makes than choosing to exercise the government’s power to kill someone. He said he couldn’t believe seeking a death sentence took only the brief consideration of a two-page memo. “[W]hether to ask a jury to end the defendant’s life is one of the most serious discretionary decisions a prosecutor can be called upon to make,” he wrote.

Castille’s judicial election campaigns didn’t help his case. While campaigning for seats on the state courts, he routinely emphasized the fact that he’d helped put 45 people on death row.

Although Roberts took Castille’s side on the due process question, he emphasized that he clearly didn’t approve of Castille’s handling of the case. He noted that he didn’t think the due process clause prohibited Castille from hearing Williams’ case but asserted, “That does not mean, however, that it was appropriate for him to do so.”

The decision was cheered by advocacy groups concerned about judicial ethics and the death penalty. Elizabeth Wydra, president of the liberal Constitutional Accountability Center, said after the opinion was released, “James Madison wrote in the Federalist Papers that, ‘[n]o man is allowed to be a judge in his own cause, because his interest would certainly bias his judgment, and, not improbably, corrupt his integrity.’ In his majority opinion in Williams today, Justice Kennedy underscored this founding principle, saying one cannot act ‘as both accuser and judge in the same case.’ The Court affirmed today that ‘[b]oth the appearance and reality of impartial justice are necessary to the public legitimacy of judicial pronouncements and thus to the rule of law itself.'”