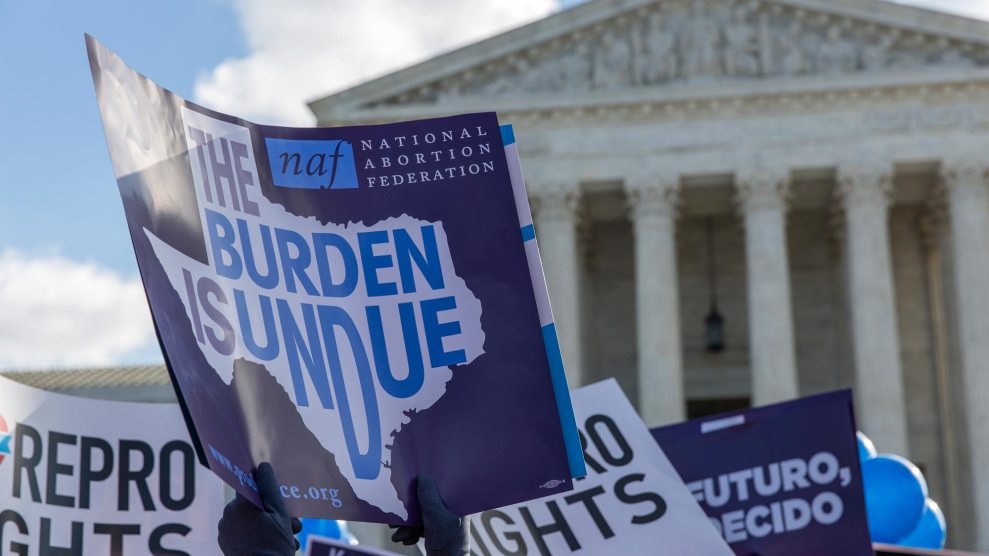 This morning, the Supreme Court issued a 5-3 ruling in Whole Woman’s Health v. Hellerstedt, widely considered the most important abortion case to come before the high court in several decades. The ruling, which strikes down several stringent abortion restrictions passed in Texas, is a historic victory for abortion rights advocates. As a result, the 18 abortion clinics currently operating in Texas will be able to stay open, and rules in seven other states that were similar to those that were just reversed in Texas could also be invalidated.

At issue in the case were two requirements of HB 2, an omnibus abortion law passed in Texas in 2013. One mandated that abortion providers have admitting privileges at a nearby hospital, and the other required abortion clinics to meet the strict infrastructure standards of ambulatory surgical centers (ASCs)—hospital-like facilities usually used for outpatient surgery.

“Both the admitting-privileges and the surgical-center requirements place a substantial obstacle in the path of women seeking a previability abortion, constitute an undue burden on abortion access, and thus violate the Constitution.”

“Both the admitting-privileges and the surgical-center requirements place a substantial obstacle in the path of women seeking a previability abortion, constitute an undue burden on abortion access, and thus violate the Constitution,” wrote Justice Stephen Breyer in his majority opinion.

The court’s reversal of these provisions means that Texas has narrowly avoided a crisis in abortion access. In the wake of HB 2’s passage in 2013, more than half of Texas’ 41 abortion clinics were forced to close because of the restrictive portions of the law. Had the court upheld the admitting privileges and ASC requirements of HB 2, 8 of the remaining 18 clinics in the state would have been forced to close, leaving just 10 clinics to serve 5.4 million Texas women of reproductive age, and eliminating access to abortion clinics in the 500 miles between El Paso and San Antonio.

This decision also means that the court has helped clear up the legal question of what exactly constitutes an “undue burden” on abortion access for women in states outside the 5th Circuit. The court’s 1992 decision in Planned Parenthood v. Casey affirmed states’ rights to regulate abortion but set the “undue burden” standard for any rules that might limit a woman’s access to abortion care. As state-level abortion restrictions have proliferated in the last five years, courts have disagreed widely on how to interpret this rule. Whole Woman’s Health was an opportunity to clarify the definition of “undue burden,” and potentially transforms what is permitted and prohibited in state-level abortion restrictions.

What’s more, the decision makes clear that the argument that has been made over and over by anti-abortion groups to justify new clinic restrictions across the nation—that they improve women’s health—will be much more difficult to make going forward without hard evidence.

Justice Breyer explains several times in his opinion that the court did not buy Texas’ argument that the admitting privileges and ASC requirements benefit women’s health. “Nationwide, childbirth is 14 times more likely to result in death,” he wrote, “but Texas law allows a midwife to oversee childbirth in the patient’s own home. Colonoscopy, a procedure that typically takes place outside a hospital (or surgical center) setting, has a mortality rate 10 times higher than an abortion.” Breyer adds in a parenthetical that he repeated from the bench, and that Justice Kagan mentioned during oral arguments in March: “The mortality rate for liposuction, another outpatient procedure, is 28 times higher than the mortality rate for abortion.”

Of the admitting privileges requirement, Breyer writes bluntly, “We add that, when directly asked at oral argument whether Texas knew of a single instance in which the new requirement would have helped even one woman obtain better treatment, Texas admitted that there was no evidence in the record of such a case.”

Justice Ruth Bader Ginsburg piled on in her concurring opinion, writing, “It is beyond rational belief that HB 2 could genuinely protect the health of women, and certain that the law ‘would simply make it more difficult for them to obtain abortions.'”

Justice Alito wrote a dissenting opinion, joined by Chief Justice Roberts and Justice Thomas. “This is an abuse of our authority,” Alito said in a summary of his dissent read from the bench. He gave a passionate speech about his concerns around the breadth of the court’s decision, holding up a packet of all the ambulatory surgical center requirements and arguing that the court has now struck down every single one of them, even though some—the need for fire alarms, for example—are “innocuous” rather than burdensome. “The Court strikes down numerous provisions that could not plausibly impose an undue burden,” he wrote in his dissent.