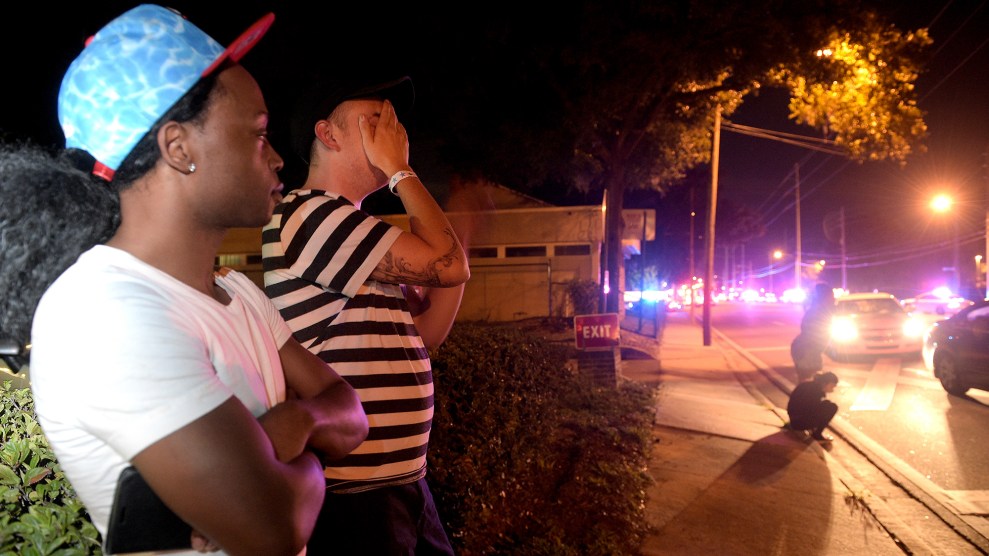 Jermaine Towns, left, and Brandon Shuford wait down the street from Pulse nightclub in Orlando, Florida, after the worst mass shooting in US history.Phelan M. Ebenhack/AP Photo

Pulse, the Orlando gay club that is now the site of the worst mass shooting in US history, is a cornerstone of the city’s LGBT community. A gunman opened fire at the club around 2  a.m. Sunday morning, killing 50 people and injuring 53 others, as the crowded bar celebrated a Latin-themed night of music and dancing. June is celebrated as Pride Month around the country. Revelers at the Pulse initially thought the gunfire was part of the music.

According to USA Today, the Pulse nightclub was co-founded by Barbara Poma with her friend Ron Legler in 2004. Poma’s brother, John, died from AIDS in 1991. “Being raised in a strict Italian family, being gay was frowned upon. However, when John came out to his family and friends, the family dynamic transitioned from a culture of strict tradition to one of acceptance and love,” the club’s website says of Poma’s brother. “It was important to create an atmosphere that embraced the gay lifestyle with décor that would make John proud. Most importantly, [we] coined the name Pulse for John’s heartbeat—as a club that is John’s inspiration, where he is kept alive in the eyes of his friends and family.”

Equality Florida, an LGBT advocacy group, released a statement on Sunday morning, reacting in horror to the massacre, and pledging to “stand in solidarity” with the victims’ families:

We have received a steady stream of emails and messages from those seeking to help or to make sense of the senseless. We make no assumptions on motive. We will await the details in tears of sadness and anger. We stand in solidarity and keep our thoughts on all whose lives have been lost or altered forever in this tragedy.

Lines began to form Sunday morning to donate blood to help treat victims of the massacre. But gay men who might want to help their friends are put in a peculiar position. Last December, the Food and Drug Administration lifted a lifetime ban for gay men on giving blood—but only if the donor hasn’t had sex for 12 months.

Perhaps the most prominent previous attack on a gay club, sometimes called “the deadliest attack on LGBT people in US history,” occurred in 1973, when 32 people were murdered at a gay bar in New Orleans.