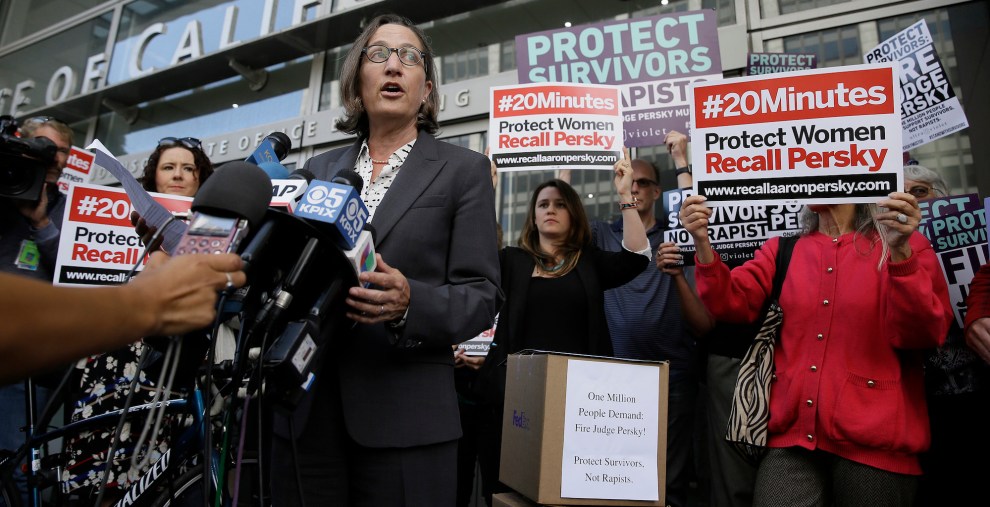 Michele Landis Dauber speaks at a rally calling for the removal of Judge Aaron Persky from the bench.Eric Risberg/AP

It’s been almost two weeks since Brock Turner, the former Stanford swimmer, was sentenced to six months in a county jail for sexually assaulting an unconscious woman outside a fraternity party—and two weeks since the victim’s impassioned, 7,000-word statement to her attacker went viral. On Sunday, at Stanford University’s commencement ceremony, a banner with “Protect Survivors Not Rapists” streaked across the blue sky. And commencement speaker Ken Burns said: “If someone tells you they’ve been sexually assaulted, take it effing seriously. And listen to them! Maybe, some day, we will make the survivor’s eloquent statement as important as Dr. King’s Letter from a Birmingham Jail.”

Now, with public sympathy for the victim still running high, her supporters are trying to harness that outrage into a professional campaign to recall Santa Clara County Superior Court Judge Aaron Persky, who was responsible for the light sentence. While several Change.org petitions calling for Persky’s removal made the rounds on social media, Michele Landis Dauber, a Stanford professor of law and sociology, has emerged as the leader in efforts to transform the immediate backlash into a long-term effort to recall Persky.

Dauber has been a powerful advocate for sexual assault victims on Stanford’s campus, revamping the university’s sexual misconduct policy, supporting student survivors, and even creating a course on the topic that will run this year. We caught up with her to talk about the recall efforts and what the Brock Turner case means for the larger movement to end campus sexual assault.

Mother Jones: Clearly the victim’s statement has struck a chord. It’s being read on news channels, and even into the Congressional Record. But it’s not as if she’s the first person to come forward as a victim of campus sexual assault. What’s different?

Michele Landis Dauber: It’s her incredible writing. It does a great job at communicating what the experience is of being assaulted, and having to go through the highly intrusive rape examination and the criminal process. We’ve been told by the people on the other side who don’t like the campus sexual assault movement that these are all “he-said, she-said” cases. Quite rightly, they say campus procedures are often very flawed, the investigation methods are not that good, and we aren’t sure what we can trust. [Opponents say that] it seems like a lot to call somebody a rapist if they haven’t gone to a criminal trial.

There are many good reasons that survivors don’t want to go to criminal court. They want their colleges to give some lesser sanction and let them move on with their lives in a less intrusive way. But she did it. She was a good citizen. She sacrificed herself. She went through that criminal trial. She went through that horrible [sexual assault response team] exam. And at the end, she got three unanimous convictions that should have resulted, by law, in a minimum sentence of two years. And yet he walked out of there serving 89 days in the county jail. That really hit people.

The message to survivors is: “You’re on your own. Don’t bother to call police or report.” And the message to potential perpetrators is: “You don’t have to take this stuff seriously.”

MJ: If campus procedures are so flawed, and some state judges can’t be trusted, where does the solution lie?

MLD: The message to survivors is: “You’re on your own. Don’t bother to call police or report.” And the message to potential perpetrators is: “You don’t have to take this stuff seriously. Don’t worry, we have your back.” Survivors are being left without an option. You can’t count on the courts and you can’t count on your school. I’m not willing to accept that. That’s why I think we need to recall this judge and replace him with someone who understands sexual violence.

MJ: Since the recall campaign began, critics have argued that it’s inappropriate to hold judges accountable to the whims of social media, especially based on a single case. What’s your response to that argument?

MLD: It seems to me that their argument is more with the California constitution than it is with me. The California constitution provides that our judges are elected, not appointed. They are serving at the pleasure of the people and they are accountable to the people. And it is the constitutional right of the women and other people of Santa Clara county to call for this recall because we’re unhappy with this judge’s perspective on sexual violence.

Yes, one case can absolutely be bad enough that it should trigger some set of voters to reconsider this person as a judge. [The sentence] is a terrible thing that has made women on our college campuses less safe, because it is sending the message that if you are young, and you are drinking alcohol, and if, previous to your crime, you have been a very high-achieving young person with good grades and high SAT scores and a record of athletic accomplishment, then that alone can exempt you from the minimum penalty that has be prescribed for sexual assault by the California legislature.

MJ: Some supporters of criminal justice reform are uncomfortable ever supporting more prosecutions, more convictions, longer sentences. What do you say to those who see any movement toward greater incarceration—even for rape—as troubling?

MLD: Two years is a short sentence. Contrary to what his parents said, this is not a life-destroying sentence. It’s not fun, it’s not a picnic, it’s not a good time, but it’s not the reason for the mass incarceration epidemic. Sending one privileged person convicted of sexual assault to a short 21-month sentence in prison is not the reason that we have the highest number of incarcerated people in the world. That’s because of long sentences for nonviolent drug offenders. Let’s be honest. There are many poor black and brown people in the California penitentiary system doing much harder time than two years for nonviolent property and drug crimes, who never sexually assaulted anybody. So let’s put this in perspective.

MJ: Emily Bazelon wrote in the New York Times last week that the fact Brock Turner was convicted at all represents progress, since so many rapists don’t get prosecuted. Charges are so often never filed, even when rapes are reported to police in the first place. Do you agree with her argument?

MLD: In this case, you have two eyewitnesses who literally pulled the attacker off the unconscious victim. You have a victim who didn’t wake up for hours afterward, who was taken to the hospital immediately and evidence was collected immediately. The attacker was apprehended at the scene with an erection still in his pants and has DNA from her vagina on his fingers. Absolutely, 10 years ago, those facts would have led to a conviction. The evidence in this case was overwhelming. It’s almost like a perfect case.

What’s the usual case? Two people alone in a dorm room, with no witnesses, and the victim has very hazy memory of what happened. It’s his word against hers. There’s no police, and there’s no [sexual assault] exam, and there’s no DNA evidence. She just says he did it, and he just says he didn’t. No charges are ever brought. That’s the average campus rape case. So if you want to say this represents progress in campus sexual assault, you’re trying to shoehorn this case in as if it were similar to other campus sexual assault cases, which it really is not.

MJ: Are there lessons for colleges and universities from this?

MLD: At Stanford, what needs to happen is a serious look at the fraternity system. On Stanford property, at a house owned by Stanford University and occupied by the Kappa Alpha fraternity, a party happened at which a girl got seriously sexually assaulted next to a dumpster. I think for Stanford, the important thing is that it has not yet apologized, or acknowledged that there was anything further to learn here, or expressed compassion for the victim. Even though this was an elite Stanford athlete—a recruited athlete, a scholarship athlete—in a D I program, at a fraternity party, all those facts did not cause Stanford to say, “OK, we need to take a step back and as a community ask ourselves [about] the way our athletics department is being run, the way our fraternity situation is being managed. Should we even have fraternities?” They have not wanted to take on the frat system, even though we’ve had, in the last few years, several very highly-publicized incidents of sexual harassment and sexual assault coming out of our fraternities.

MJ: What do you see as the next step in the fight to stop sexual assault on campuses?

MLD: We have to give out sanctions that fit the offense, just like in the criminal court. If you have a student who was [found responsible for] sexual assault with force, or while she was incapacitated, you need to remove that individual from your campus. I agree that the process by which you do that must be fair and must provide due process and must be administered by competent people. An unfair process helps no one. But once you’ve gone through with that process and you think that you know that person has raped someone, they have to go.

We need to get good processes in place, we need to use them, and then we need to impose good sanctions that make our campuses safe. This case is encouraging because the first step to the solution is empathy. There is empathy for this victim that maybe we wouldn’t have seen before, coming from everybody except Stanford and Judge Persky. But for millions of other people around the world, there’s empathy and compassion for her even though she got thoroughly intoxicated, and that wouldn’t necessarily have been the case. So maybe it is progress.