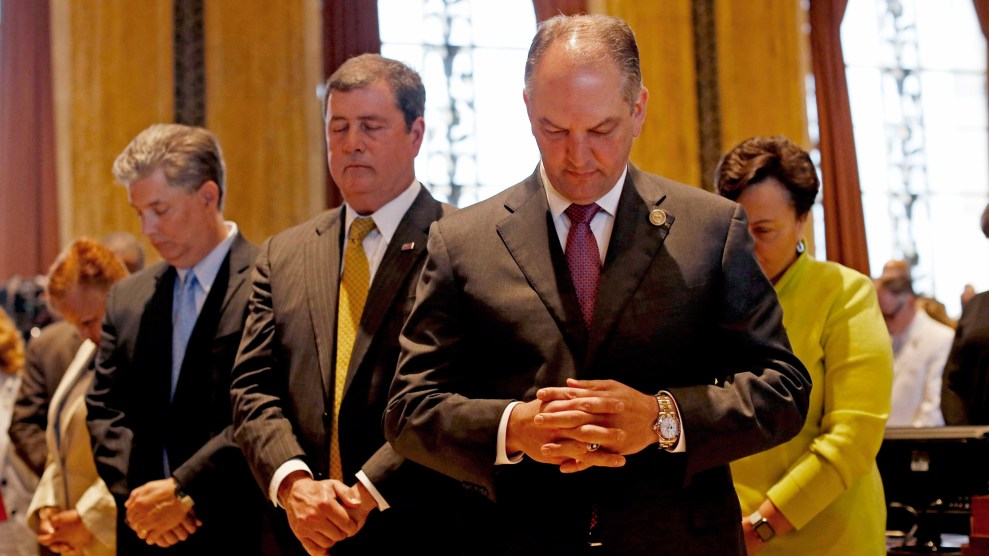 The Louisiana legislature continues to pass anti-abortion bills. The most recent one was signed by Gov. John Bel Edwards Tuesday night, and it bans the dilation and evacuation procedure, the safest and most common abortion method for women in their second trimester.

The law, known as the Unborn Child Protection From Dismemberment Abortion Act, was sponsored by Rep. Mike Johnson (R), who said in a statement that the legislation reflects “who we are as a people.”

“In Louisiana, we believe every human life is valuable and worthy of protection, and no civil society should allow its unborn children to be ripped apart,” Johnson said after Edwards signed the bill. “Incredible as it seems, we needed a law to say that.”

During the procedure, a physician dilates the cervix and removes fetal tissue. The law leaves abortion providers with two options: either use a less effective method at that stage of pregnancy, such as medication abortion, or stop performing abortions after 14 weeks entirely. About nine percent of women who seek abortions do so after 12 weeks, when it would be necessary to have a dilation and evacuation (or D&E) procedure. If a physician were to violate the law, they be fined up to $1,000 and face up to two years in jail. The law does include a caveat that the procedure may be performed if the woman’s life is at risk.

“In a state with extremely limited options for women seeking reproductive health care, it’s unconscionable that Louisiana politicians are working overtime to pile on additional restrictions,” said Nancy Northup, president and CEO of the Center for Reproductive Rights. “Louisiana women already face countless obstacles when they have made the decision to end a pregnancy, and these measures will only drive safe, legal, high-quality care out of reach for many women.”

The Guttmacher Institute, a leading think tank that provides research on reproductive rights, reported that legislators in 13 states have proposed D&E bans, despite judges in Kansas and Oklahoma blocking the laws. In the Kansas case, the American College of Obstetrics and Gynecologists submitted an amicus brief arguing that bans on the D&E procedure seek “to substitute the legislature’s political judgment for the medical judgment of physicians to the detriment of patient safety.”

The legislative trend comes from model legislation penned by National Right to Life, an anti-abortion group that bills itself as “the nation’s oldest and largest pro-life organization.”

For example, medication abortion is appropriate for women who are up to 10 weeks along in pregnancy, but after that it’s not considered a safe and effective method, and it could lead to complications for women in their second trimester.

Other laws that have been passed and upheld this year include those involving waiting periods and admitting privileges for physicians.

Last month, Gov. Edwards signed legislation tripling the wait time between a woman’s initial consultation with a physician and her procedure. With this increase from 24 to 72 hours, Louisiana joined Missouri, North Carolina, Oklahoma, South Dakota, and Utah as states with the longest waiting periods in the country.